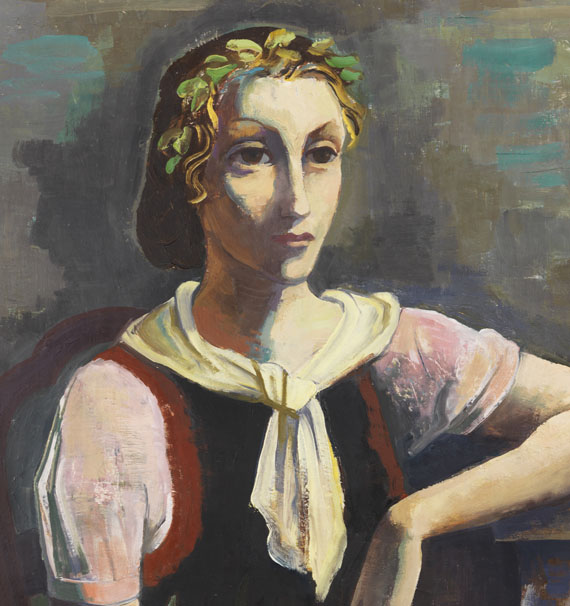 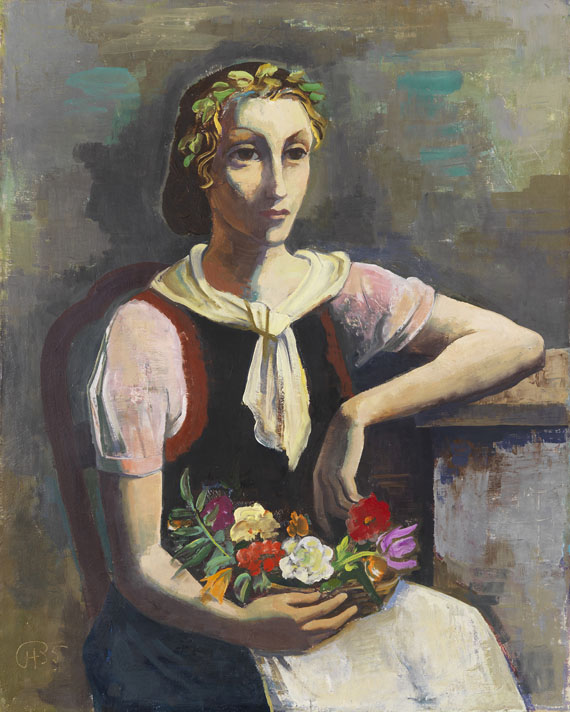 • Hofer uses the mythologic subject of "Flora", the Roman goddess of flowers and of the season of spring, for his very own contemporary pictorial language
• With a remarkably long exhibition history and a vast number of publications.
• Part of the collection of the Toledo Museum of Art, Ohio, for 65 years.
• Striking visualization of a particularly strong melancholia.

In 1918 Karl Hofer traveled to Ticino for the first time, which in the years to come would serve him as a place of refuge and source of inspiration. In the mid-1920s he made it his second home when he bought a summer cottage on Lake Lugano. In works from the following years the artist often depicted the Ticino landscape, local sights, the local people and their lives, for example in "Kleine Tessiner Tischgesellschaft" (around 1935/1940). The work offered here shows is a document of his interest in local Ticino costumes. Similar to the much later depictions "Mädchen mit Blütenkranz" (1938), "Die Tessinerin" (1940) and "Mädchen mit Blütenkranz" (1942), Hofer staged the traditional Ticino costume in blue and red with an apron and a typical shawl. But instead of rendering a painting of a traditional portrait of a young woman from the Ticino, Hofer dares to refer to a traditional theme of European art history. With the characteristic formal reduction to individual essential elements and the intrinsic melancholy of Hofer's pictures, the artist succeeds in translating the mythological subject of "Flora", the Roman goddess of blossom and the personification of spring, into his very own contemporary visual language. Her gaze averted from the viewer, the wreath of hair braided from flowers and leaves and the brightly colored spring flowers in her lap evoke memories of famous depictions of "Flora", such as Botticelli's "Primavera" or the "Flora" depictions from the English Pre-Raphaelites. In fact, to Hofer it was about an artistic generalization, a general validity of the form, the representation of a general definition of the concept of beauty and the painterly visualization of a mood: the melancholy that he himself was so familiar with from those years before the Second World War. [CH]
More Information
+
Sell
Get a free appraisal for a similar object!
+
Register for
Karl Hofer
+
Buying from A-Z
+
Contact a specialist
+
Karl Hofer Biography
Share