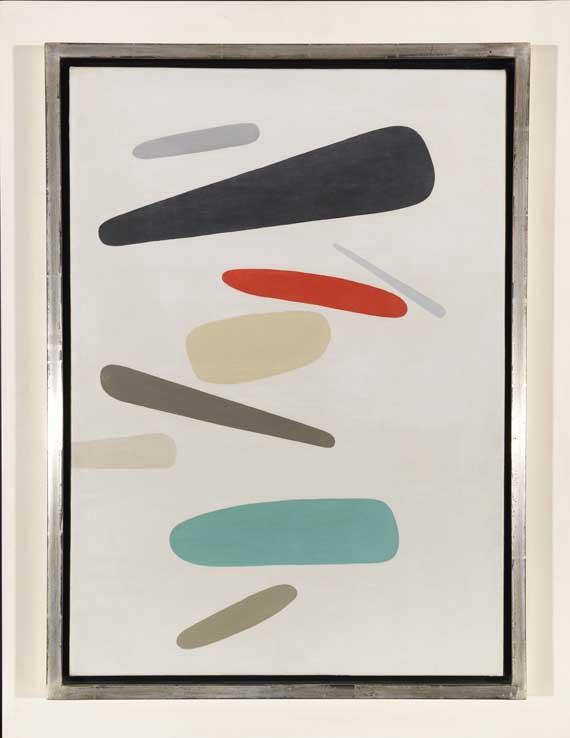 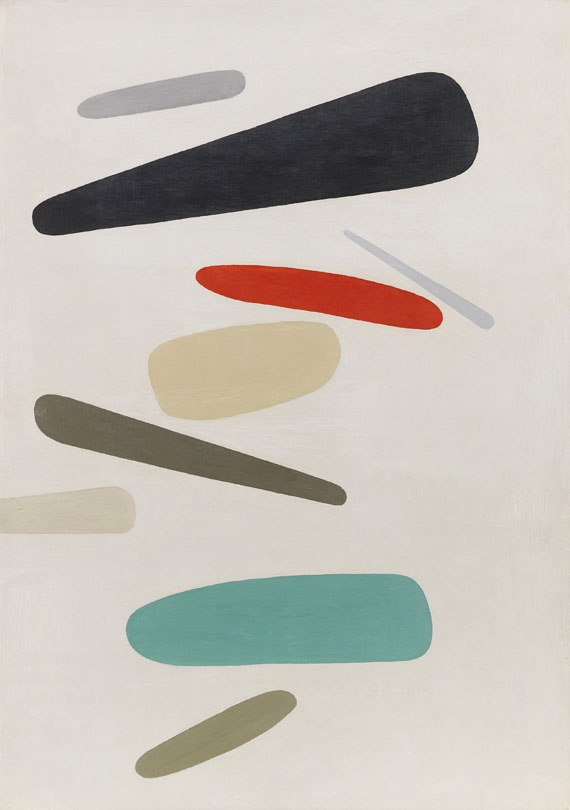 309
Willi Baumeister
Formen farbig (Fliegende Formen), 1937.
Oil on canvas
Estimate:
€ 70,000 / $ 69,300
Sold:
€ 137,500 / $ 136,125
(incl. 25% surcharge)
Formen farbig (Fliegende Formen). 1937.
Oil on canvas.
Beye/Baumeister 762. Stretcher signed and dated, as well as with a label, there once more signed and inscribed with the work number "WB Nr. 610", as well as with another label with a red fingerprint. 65 x 46 cm (25.5 x 18.1 in).
A sketch of the painting can be found in the artist's diary (p.114), it is inscribed with the insightful note: "Vorgänger der >fliegenden Formen< Juni 1938" ('Forerunner of >fliegenden Formen< June 1938', cf. Beye/Baumeister 764ff.).
• One of the first purely abstract compositions by Willi Baumeister from the small, early group of works called "Ideogramme und Zeichen" (Ideograms and Signs, 1937-1941).
• Extremely rare. So far only two other compositions from this group of works have been offered on the international auction market.
• One of the few multi-color compositions from the group that mainly comprises works executed in black and white.
• The floating biomorphic structures show clear parallels to contemporary creations by Hans Arps and Alexander Calder.
• Baumeister's "Ideogramme und Zeichen" paintings made for one of the key positions in 1930s abstraction.

The compositions in the small group of works "Ideogramme und Zeichen" are wonderfully light. In a perfect floating harmony the clearly contoured forms are balanced against each other at a distance against a monochrome light gray background. Nothing disturbs our gaze with which we follow the gentle swaying of the contour. All of this inevitably evokes parallels with Alexander Calder's famous mobiles, with which the American artist also began to experiment around the mid-1930s. "Formen farbig (Fliegende Formen)" (Colored forms (flying forms) is one of Baumeister's first consistently abstract creations, which refuse any figurative association, not only in formal terms but also through their title. Baumeister had a strong affinity for signs, which in the 1940s he once described as the "archetype of the picture", as "the first and perhaps the purest position of the optical-visual" (quote from: Beyer/ Baumeister, vol. I, p . 14). Apart from Calder, the gently floating structures in Baumeister's impressive composition with their reduced biomorphic formal language are also reminiscent of the contemporary creations of the Franco-German sculptor Hans Arp. The artists Arp and Baumeister, who were almost the same age, came into contact through the Dadaist Kurt Schwitters. Their friendship and artistic exchange presumably began in Paris as early as the in 1920s. A meeting of the two artists in the French capital is documented for 1930, and in 1938, that is the year after the present composition was created, Arp inspected the works of art that Baumeister had deposited at the Kunsthalle Basel in 1937/38 for safekeeping from the National Socialists. Mutual studio visits and the exchange of works of art and artistic positions are documented for the post-war period. Baumeister and Arp are also members of the avant-garde Parisian artist group "Abstraction Création", which the American artist Alexander Calder also joined in 1931. The beautiful minimalist composition "Formen farbig (Fliegende Formen)" is therefore not only an astonishingly strong composition and - according to the artist's notes - the work that initiated his series of "flying forms" in black and white, but also an impressive artistic document of Baumeister's international artistic exchange in the 1930s. Baumeister, who taught as professor at the Stuttgart Art Academy from 1946, is one of the most important German avant-garde artists of his time and one of the pioneering representatives of abstract painting in Germany. Baumeister's compositions have been shown in several exhibitions at the Museum of Modern Art, among them in the legendary overview show "German Art of the 20th Century" in 1957 alongside compositions by Kandinsky. Most recently, in 2014, the MKM Museum Küppersmühle, Duisburg, traced Baumeister's career from a Stuttgart art student to an internationally acclaimed post-war artist in the comprehensive exhibition "Willi Baumeister International". [JS]
More Information
+
Sell
Get a free appraisal for a similar object!
+
Register for
Willi Baumeister
+
Buying from A-Z
+
Contact a specialist
+
Willi Baumeister Biography
Share