Lot 421
Back side
Frame image 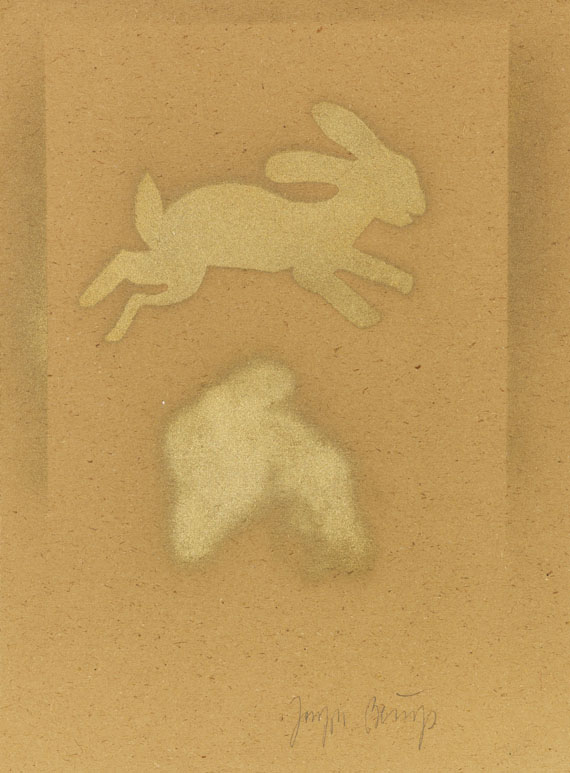 • The motif of the hare also appears on the "Hasensteine".
• Joseph Beuys is one of the most importand artists of the post-war era in Germany.
• The hare - for Beuys an animal with an energy function.
• Unique object.

LITERATURE: 10 Jahre Sammlung Sal.Oppenheim 1997-2007, p. 418, illu. on p.71.
"The rabbit is the element of movement, of action that changes the rigid concept of art. A resident of Eurasia who transgresses all borders and can even deal with the Berlin Wall. This is related to the idea of the great unity that Central Europe stands for.
Joseph Beuys in an interview on November 15, 1985.

In his campaign "How to explain pictures to a dead hare" at Galerie Schmela in Düsseldorf on November 26, 1965, Joseph Beuys connected the color gold with the hare. Beuys’ head was covered with gold leaf, gold dust and honey. His head, the valuable, intellectual control center of man and artist, was marked with the noble metal. At that time the hare took the position of the observer; whereas the real viewers (= exhibition visitors) stood on the street in front of the gallery and followed the scene inside through the window. Time and again the hare appears in Joseph Beuys‘ drawings, actions and multiples. It serves as an important link for comprehension. Often in connection with gold, like in his action at documenta 7 in Kassel in 1982, for which Joseph Beuys melted an exact copy of the golden tsar crown of Ivan the Terrible, pouring it into the mold of a chocolate bunny, and creating a "Hase mit Sonne" (Hare with Sun).
We also find the silhouette of the running hare, as it can be seen here, on the "Hasensteine". The running hare is characterized by its speed and agility. To Joseph Beuys it embodies mental agility of thinking and will. In the understanding of the artist, these properties are essential for the establishment of a social sculpture: Only those flexible in their thinking and not narrow-minded can create something new. This thought seems banal, but in post-war German society narrow-mindedness and habitual thinking were of strong relevance for stagnant social development. A reinterpretation of the symbolism of gold outside its material value took place on the same level. Its changeability made it a perfect material for Beuys‘ art; it can be molten or solid, flat or sprayed, cold or warm. It is not primarily the material value that is of interest, even if the material‘s traditional dignity and sublimity always resonate. [EH]
More Information
+
Sell
Get a free appraisal for a similar object!
+
Register for
Joseph Beuys
+
Buying from A-Z
+
Contact a specialist
+
Joseph Beuys Biography
Share