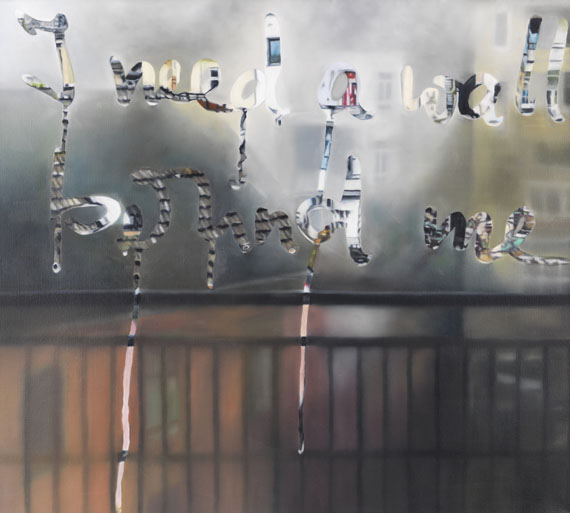 • Kneffel is one of the most important contemporary artist and a master of sophisticated visual illusion.
• Prime example of both Kneffel's poised usage of sharpness and blur and her complex play with visual illusion.
• Kneffel's paintings are part of acclaimed public collections such as the Pinakothek der Moderne, Munich, the Museum Frieder Burda, Baden Baden and the Olbricht Collection, Berlin.
• In 2012 and 2016 the Gagosian Gallery, New York/Los Angeles, showed solo shows, in 2019 the Kunsthalle Bremen hosted the grand exhibition "Karin Kneffel. Still" .

“Karin Kneffel’s paintings are terrific illusions. They are optical games gliding across things, the inanimate and the animate. She is an observer who watches for the pretense of beauty.”
Rose-Maria Gropp

Essay
Karin Kneffel is the master of the refined optical illusion. In her representational paintings Kneffel's masters the virtuoso play with alienation effects, with unusual points of view, extreme close up views, reflection and blurring. The versatile use of blurring in Kneffel's work testifies to her studies with Gerhard Richter, whose master class she attended at the Düsseldorf Art Academy in the 1980s. In contrast to Richter, however, the special appeal of Kneffel's paintings lies in the unique combination of sharpness and blur, of alienation and photo-realistic accuracy. Kneffel's paintings are accurately devised compositions put on the canvas in a fine painting manner reminiscent of Old Masters. Kneffel's painting confuses and enthuses, it questions our traditional viewing habits, it is close to reality and yet at the same time opens up a completely new and unknown world, full of unexpected visual experiences. Accordingly, "the first impression that a viewer of Karin Kneffel's paintings gets is that of a skillfully staged artificiality and an insecurity and fragility of our pictorial access to the world that cannot be overcome." (Thomas Wagner, in: Karin Kneffel. Haus am Stadtrand, Krefeld 2009, p. 71). "Ohne Titel (I need a wall behind me)" shows the view through a fogged up window pane over a balcony railing into a backyard. The hidden motif becomes only visible in the writing and the water droplets than run down the pane. Kneffel confronts us with a perfect optical illusion, which almost intuitively makes the viewer want to step up to the painted glass pane and wipe it clear in order to get unrestricted view. Kneffel, who is a professor at the Academy of Fine Arts in Munich, has continuously expanded her visual language over the past decades, constantly opening up new complexes of motifs, always daring to do something new, thus creating an extremely versatile yet highly consistent pictorial oeuvre of a high recognition value. As early as in 2009, In her cycle of works "Haus am Stadtrand" from 2009, which she had made for the exhibition project of the same name at the Kunstmuseeen Krefeld, Kneffel examined the motif of the window as a connection between inside and outside, between hissing sharpness and blur. In this context she also made almost photo-realistic views from a garden through a window pane obscured by bizarre raindrop formations into living rooms. In the present painting, Kneffel uses the window pane as a carrier for a text written on the fogged up window with the fingers. In an astonishing way she equates the visual level of the real image carrier of the canvas with a second virtual level of the window pane and thus confronts us with a vexing optical double illusion. In the end, the statement "I need a wall behind me" is probably to be understood as a self-referential statement programmatic for Kneffel's painterly work, which successfully refuses to go or look back. [JS]
More Information
+
Sell
Would you like to sell a similar object?
+
Register for
Karin Kneffel
+
Preview & Auction Procedure
+
Bidding Options
+
Bid by telephon / written
+
Buying from A-Z
+
Catalogue Order
+
Contact a specialist
Share 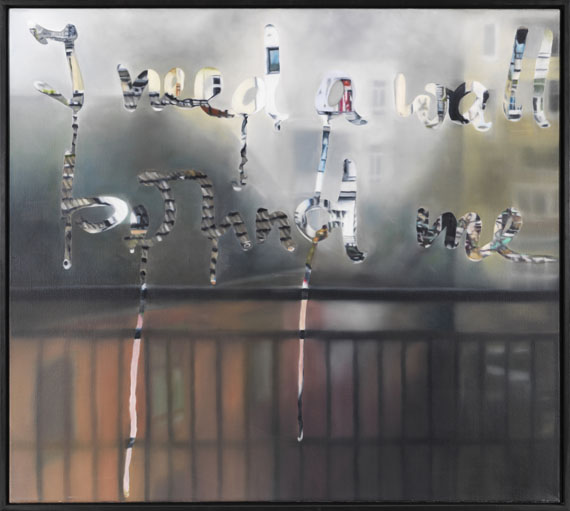 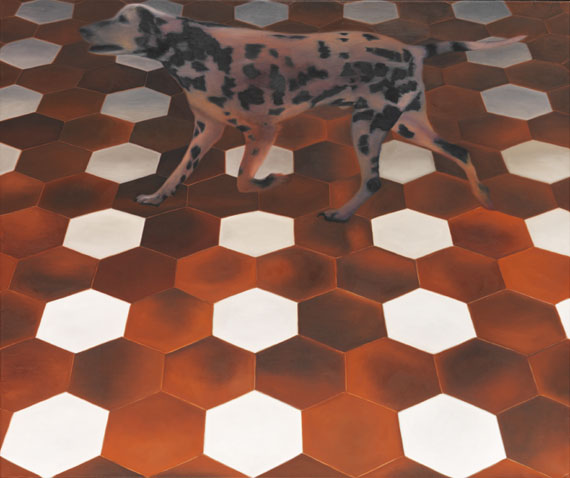 KARIN KNEFFEL
Ohne Titel, 2003
Sold: € 93,750
You might also be interested in
+
and all other offers
Buyer's premium, taxation and resale right apportionment for Karin Kneffel "Ohne Titel (I need a wall behind me)"
This lot can be subjected to differential taxation plus a 7% import tax levy (saving approx. 5 % compared to regular taxation) or regular taxation.