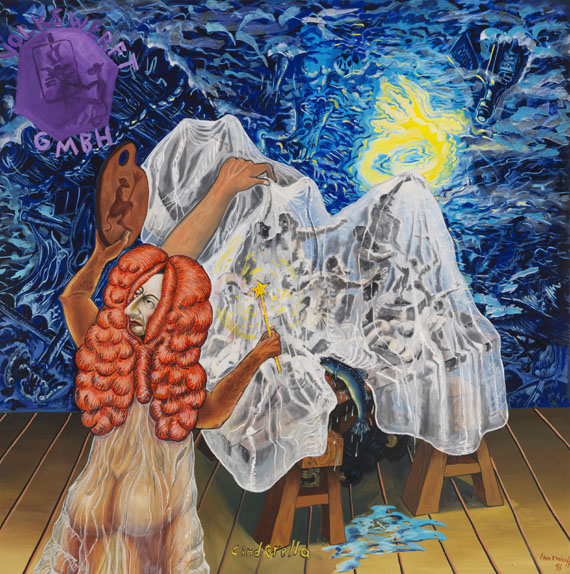 • Jörg Immendorff is one of the most significant and internationally most successful German post-war artists.
• Monumental work showing the essence of Immendorff's art.
• In this characteristic work the artist depicts himself in form of the figure with the wig.
• One of the very rare large-size works on the international auction market.
• In same ownership since it was made.
• Similar works from this work group are at, among others, the Collection Essl, Klosterneuburg/Vienna and the Museum Ludwig, Cologne.
• Recently the Museo Nacional Centro de Arte Reina Sofía, Madrid, as well as the Haus der Kunst in Munich showed grand retrospectives (2018/19).

Jörg Immendorff is considered one of the most important and internationally successful German artists of the postwar period. In the 1960s he studied under Joseph Beuys at the Düsseldorf Art Academy, where he then taught himself beginning in 1996. For more than 50 years, his works have been shown in national and international exhibitions, including documenta 5 and 7 in Kassel in 1972 and 1982, the 37th Venice Biennale in 1976, and later at the Museum of Modern Art, New York (1996 and 2006), Museum Ludwig, Cologne (2004), Neue Nationalgalerie, Berlin (2005), and Central Academy of Fine Arts, Beijing (2017), among others. Most recently, both the Museo Nacional Centro de Arte Reina Sofía, Madrid, and the Haus der Kunst in Munich have dedicated large-scale retrospectives to him (2018/19).
Immendorff's intensely colored, figurative pictorial worlds confront us with an abundance of symbols, narrative strands, and art historical references. His paintings often function like picture puzzles, playfully inviting the viewer to make sense of them. In Cinderella these take the form of an incongruous self-portrait of the artist impersonating a woman; a sculptural rendering of Théodore Géricault's Raft of the Medusa (1819); a huge seascape overflowing the borders of the painting, and the citation of a fairy tale known to every child. Let us begin with the three- dimensional rendering of Gericault’s painting enthroned in the center of the picture. The Raft of the Medusa arose in reaction to horrendous story of the 150 people stranded on a small raft after “The Medusa” sank in 1816; by the time it reached Senegal 13 days later all but fifteen had perished. One hundred and eighty years later, Immendorff decided to hoist the vestiges of this catastrophe from the depths of the sea, so as to free it from the veil of history. If Gericault’s painting had been perceived as standing for the political shipwreck of France, whose rudderless politicians were on course for national catastrophe, then with Cinderella Immendorff implied that the leaders steering the ship of a recently reunified Germany faced the same danger. Like The Raft of the Medusa, Cinderella is an “engaged painting”, one though that lacks almost all traces of realism. Instead with its inventive forms, Immendorff used the vehicle of grotesque-comic humor to take issue with collective consciousness: grotesque in the sense of the cheeky hyperbolizing of a ‘ready-made’ motif so that it becomes subversive; comic, because Immendorff knows the power of mixing vulgarity with critical intelligence to create enlightening laughter. Both qualities first emerged in his Baby Art (1966/67). The cartoon-like Agit-Prop 1970s paintings that grew out of them would soon help birth not just the burlesque compositions of Martin Kippenberger but also the offbeat but penetrating quality of many of Neo Rauch’s best paintings.
A large seascape fills much of the ‘background’ of Immendorff’s Cinderella. In its rough blue waters we espy not just an overturned raft but a female figure clasping its edges. At its bottom the vestiges of a sculpted eagle float; near the upper part of the painting a bottle with a message bobs about. Opposite it the words "Volkswerft GmbH" can be clearly made out. They draw attention to a scandal around the Stralsund Volkswerfts’ (Vulkan Group) misappropriation of funds earmarked for East Germany, which floated to the surface the year Immendorff painted Cinderella. The blue fish we see gasping for air near Immendorff’s model of The Raft of the Medusa even seems to have flipped itself out of the seascape, as though seeking to flee the poisoned waters of these histories.
Cinderella also evidences Immendorff’s mastery of self-portraiture. Wearing a transparent negligee and sporting a huge wig, Immendorff has screwed around his head so that it appears absurdly above his voluptuous buttocks. This sort of deliberate representation of himself as something so other as to bring about laughter also cites strategies central to his actions of the sixties, continued in his Café Deutschland paintings. The large fiery red hairpiece that Immendorff wears in Cinderella reveals too his new intense preoccupation with the satirical-socially critical art of William Hogarth (1697-1764). It comes from Hogarth's "The Five Orders of Periwigs" (1761), an etching that mocked the outlandish coiffure fashions of the 18th century. Immendorff first dealt with Hogarth's works in 1994, when he designed the set and costumes for the 1994 Salzburg Summer Festivals production of Igor Stravinsky's opera "The Rake's Progress."
Almost every one of Immendorff’s paintings and sculptures proceed from the artists’ conviction in the productive power of play. Convinced that “Really to play, a man must play like a child.” Immendorff set about to reactivate that Dadaist quality in post-1945 German art. And so in Cinderella he appears as the godmother of that female fairy tale character. Having traded his brush here for a sparkling magic wand, he holds it aloft as if to say, that his task as an artist is to twinkle into meaning the salient facts of all kinds of slumbering histories. Thus, the monumental work offered here contains the concentrated essence of Immendorff's art: self-portrait and tongue-in-cheek self-irony, contemporary political commentary and art historical recourse, seriousness and cheeky provocation, garish, unmistakable figuration and bewildering, spectacular whimsicality - a painting set on the stage of Immendorff's own studio.
More Information
+
Sell
Get a free appraisal for a similar object!
+
Register for
Jörg Immendorff
+
Buying from A-Z
+
Contact a specialist
+
Jörg Immendorff Biography
Share