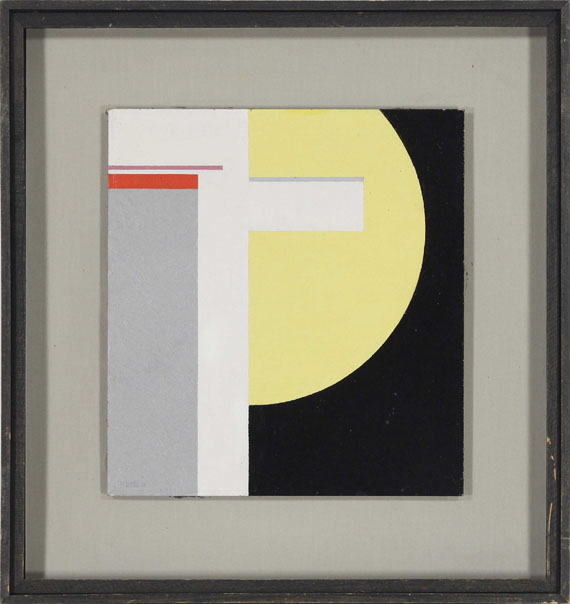 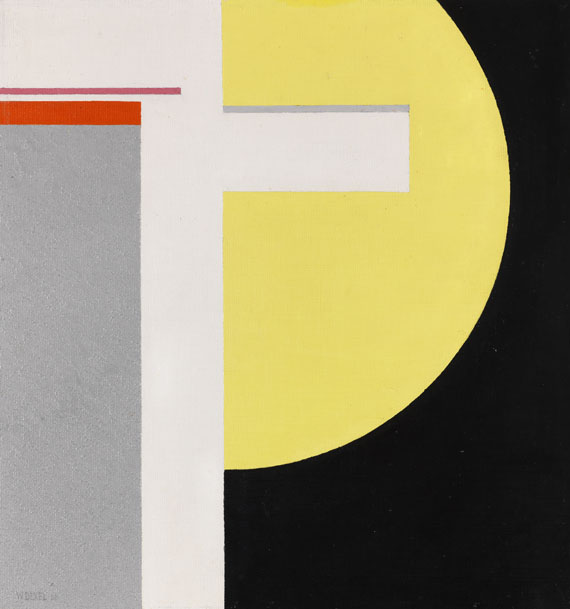 • Consistent provenance.
• The constructivist works from the 1920s are the artist's most sought-after works on the international auction market.
• In 1974 part of the comprehensive solo show at the Kestner Gesellschaft, Hanover.
• The respective reverse glass painting is in the Sprengel Museum, Hanover.
• Dexel's strictly puristic forms and compositions made for his prominent position among the Constructivists.

After a few years of figurative painting with expressionist and cubist tendencies, Walter Dexel found a completely free, abstract visual language without any reference to reality in the 1920s. Through his friendships and close relationships with Bauhaus artists such as László Moholy-Nagy, the Dadaist Kurt Schwitters and the De Stijl artist Theo van Doesburg, he got to know constructivist painting. Around 1922 he eventually detached himself, also owed to the influences his artistic environment had on him, from the subject. With logical, mathematical-rational rules and the concentration on a few, simple elementary forms, he now composed clear, strictly geometric structures in almost puristic clarity, in which motif and background grow together and share a "common" surface. In ever new arrangements and variations, Dexel explored the fascinating relationship between colors, shapes, lines and, more rarely, letters and numbers within a rectangular image space. With regards to a later realization as a reverse glass painting, Dexel created a few very strong compositions in an almost squared format in 1926. This work presented here, with its strong contrasts and an almost poetic combination of strong, rich colors and delicately mixed tones, as well as with angular shapes, fine lines and a semicircle that loosens the composition up, must have been a composition the artist himself considered particularly felicitous, as he made a reverse glass picture of it the same year. Today it is part of the collection of the Sprengel Museum in Hanover. Dexel pursues his goal with a strong consistency that earned him an outstanding position among the constructivists of his time. Dexel had several shows at the Berlin gallery Der Sturm, among others, with Oskar Schlemmer and Willi Baumeister. With its strong contours, the clear forms and its unique poetic touch in the use of colors and in the arrangement of the forms, the work offered here also testifies to Dexel's important role in Constructivism of the early 20th century, as well as to the progressiveness and innovative creativity through which his astonishingly timeless work stands out to this day. [CH]
More Information
+
Sell
Get a free appraisal for a similar object!
+
Register for
Walter Dexel
+
Buying from A-Z
+
Contact a specialist
+
Walter Dexel Biography
Share