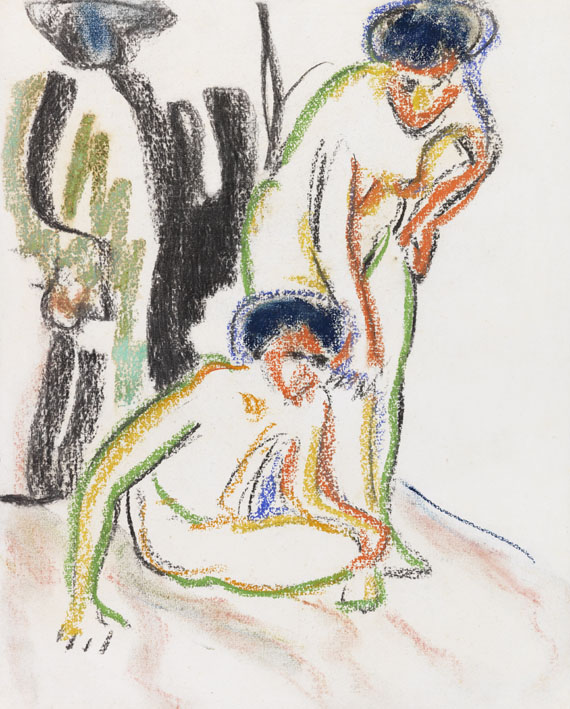 • Dynamic, powerful and particularly colorful work from the best "Brücke" times.
• Impressive physicality with the greatest freedom of style and strict reduction to the contour.
• At the same time the artist created, among others, the painting "Drei Akte im Walde" (1908, Stedelijk Museum, Amsterdam) with a similar motif.
• Bathers and plein-air nudes are among the main motifs of the "Brücke" artists.

The work is registered at the Ernst Ludwig Kirchner Archive, Wichtrach/Bern.

Essay
Together with Karl Schmidt-Rottluff, Erich Heckel and Fritz Bleyl, Ernst Ludwig Kirchner founded the artist group "Die Brücke" in Dresden in 1905. In the established Dresden art scene, the young artists saw no significant prospects for themselves or their modern, progressive work at that time and tried to arouse the interest of a larger audience with their work in joint exhibitions. Rejecting classical art studies, the friends studied the modern art of their time instead and devoted themselves to the pure study of nature without the influence of the traditional, formal, technical and aesthetic rules of the academy. Confidently and unswervingly, they were on a quest for their very own, individual artistic style. Today "Die Brücke" is considered to be one of the most important artist groups of the early 20th century. Naked people in free movement were the central theme for the painters of the 'Brücke'. They were not interested in studying a figure ideal in the traditional academic manner, but rather wanted to reproduce real life in their art in an unadulterated way, and this could be experienced most directly in the natural movement of naked people. During their summer stays at the Moritzburg Lakes near Dresden, the "Brücke" painters developed a liking for the paradisiacal, sexually explicit life in nature. Drawing together in nature, which mainly yielded nude studies, the three artists Kirchner, Heckel and Pechstein developed their characteristic sharp style in the year 1910. The carefree summer stays also echo in the subsequent work, which the artists executed in their studios, such as it s the case with the lithograph "Drei Akte im Wasser" (Three Nudes in Water). The seemingly simple work delivers proof of Kirchner's outstanding graphic skills. Kirchner's drawings, are characterized by an arrestingly poised line and a powerful expressiveness, from the years before World War I, testify to everything that made German Expressionism so unique. Ernst Ludwig Kirchner's drawings from this period are among the most important accomplishments of this era. Traditional viewing habits are questioned and focus was put on the pure drawing. Due to their unmatched quality, Kirchner's drawings make up an independent body of works in German Expressionism.
More Information
+
Sell
Would you like to sell a similar object?
+
Register for
Ernst Ludwig Kirchner
+
Buying from A-Z
+
Contact a specialist
+
Ernst Ludwig Kirchner Biography
Share 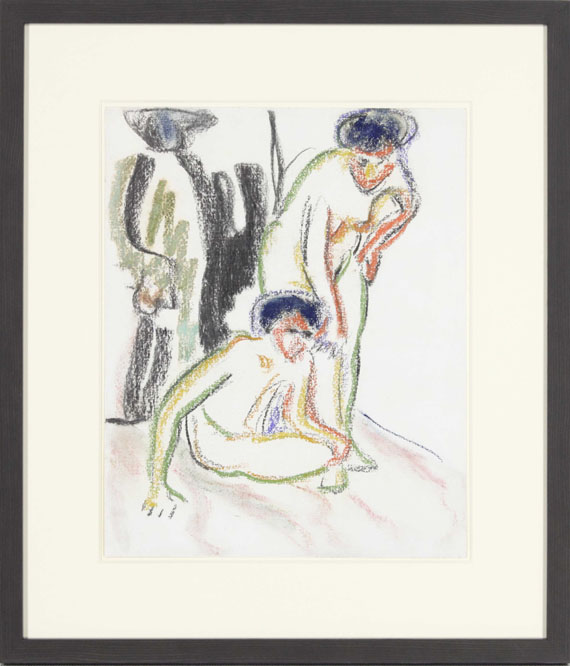