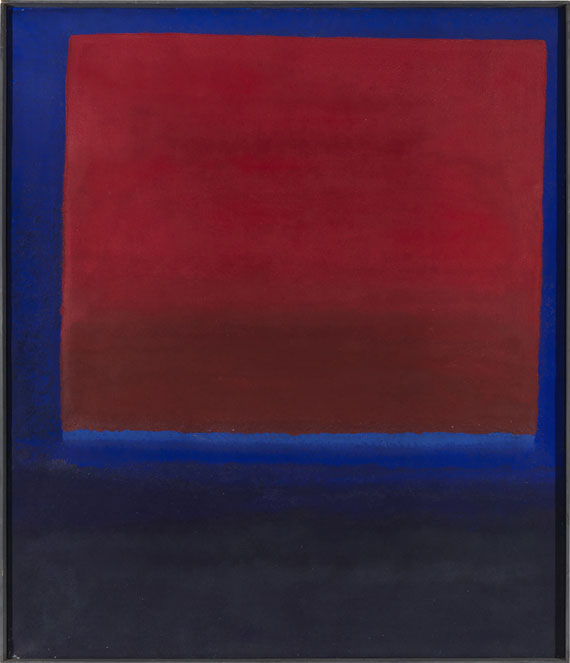 • Shown at documenta II (1959) the year it was made.
• Ever since privately-owned.
• Subtly modulated early color field, particularly fascinating for its gentle oscillation between red and blue values.
• Rupprecht Geiger's paintings are in many renowned collections.

"I believe in the psychological effect colors have on people. [..] A picture can also exert a strong effect on a person, simply from the pure force of the color, and that's basically the nature of the color."
Rupprecht Geiger, quote from: Pinc kommt! Rupprecht Geiger, The Schaufler Foundation, Dresden 2017, p. 19.

"The sky is an unprecedented blaze of color and of an unbelievable vastness. The possibilities are unlimited", is what Rupprecht Geiger had recorded in his war diary in Russia in 1941 (Rupprecht Geiger, quote from: Pinc kommt! Rupprecht Geiger, The Schaufler Foundation, Dresden 2017, p . 31). It is the soft color modulations of the sky that stimulate Geiger and which the burning cities transformed into impressive color scenarios at night. For Geiger they became counter-images to the depressing realities of war. From the 1950s onward red and blue were the colors that decisively shaped the impressive artistic work of the German color field painter Rupprecht Geiger. The combination prevailed well until the end of the 1950s - as in our wonderfully gentle modulation - before Geiger clearly separated the two color values in his later compositions. While red as the color of blood and fire stands for extreme energy and emotional charge, the cooler blue is the more rational, more calm color value, which in the present work is modulated from a luminous tonality to a deep night blue. At the same time, Geiger increases the blood red of the luminous square in the lower part in a gentle modulation to a diffuse glowing dark red, an optical countermovement that brings the composition into a wonderful, almost floating balance. Rupprecht Geiger created something significant in art history, not only with his color modulations, but also with his shaped canvases, which earned him a special progressive position in German post-war abstraction. In the preface of the catalog raisonné Helmut Friedel suggested that Geiger is much more comparable with his contemporaries in America, such as Mark Rothko, Ellsworth Kelly and Barnett Newman. Geiger's paintings have been shown in various exhibitions in the USA since the 1950s and the artist was awarded the Solomon Guggenheim Prize, New York, in 1959. [JS]
More Information
+
Sell
Get a free appraisal for a similar object!
+
Register for
Rupprecht Geiger
+
Buying from A-Z
+
Contact a specialist
+
Rupprecht Geiger Biography
Share