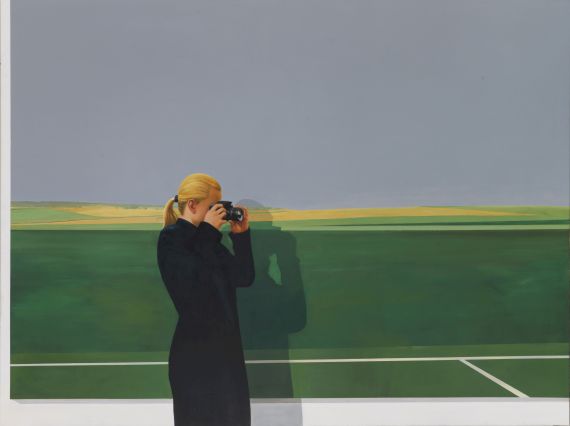 • Eitel is a representative of the New Leipzig School, one of the most prominent figurative tendencies in contemporary art.
• Early large-size work.
• Tim Eitel is represented by the renowned galleries 'Eigen+Art' in Germany and by 'The Pace' internationally.

From 1994 Tim Eitel studied fine art at Burg Giebichenstein in Halle and from 1997 painting at the University of Graphic and Book Art in Leipzig. The school was the cradle of a new tendency in contemporary painting that led to the formation of the "Leipzig School" with its own unmistakable visual language. The founders include Bernhard Heisig, Wolfgang Mattheuer and Werner Tübke, who studied at what then was the Leipzig Art Academy. Later the artists also had teaching posts at the school. After the end of the GDR and the school’s renaming to University of Graphic and Book Art, the "New Leipzig School" developed, of which Neo Rauch was also a protagonist. The gallery owner Judy Lybke represents this school on an international level with great success. Tim Eitel is one of the well-known representatives of the sought-after "New Leipzig School". From 2001 to 2003 he was a master student with Professor Arno Rink. During this time, the series of works "Museumlandschaften" (Museum Landscapes) was created. In these works Tim Eitel examines questions regarding the relationship between figure and environment, between viewer and work, between surface and space. He always starts with a series of photos, which are like a classic sketchbook for Eitel. He captures what instinctively interests him, it can be a piece of architecture, a gesture, a posture. From these photographically captured moments, he then assembles the image composition like a collage. Tim Eitel also implements this photographic approach in his very precise, realistic paintings. The relationship between figure and space is artfully staged in "Museumlandschaft" from 2001. We notice only at second glance that the young woman stands in front of a painting in a museum and is not taking photos of the surrounding outdoors. As an art recipient, just like an artist, she captures what she sees. The picture in the picture is so dominant in the composition that it almost functions like a backdrop. The viewer appears in the picture and thus sort of relegates the actual picture one level back. The result is an interior we hardly perceive as such. The landscape painting in the picture is particularly captivating for its subtly concerted, almost monochrome color surfaces and their contrast with well-dressed viewer. With its pleasant reduction and clarity, the surprising perspectives and the clever image solutions, the composition is a remarkable work by the artist. [SM]
More Information
+
Sell
Get a free appraisal for a similar object!
+
Register for
Tim Eitel
+
Buying from A-Z
+
Contact a specialist
Share