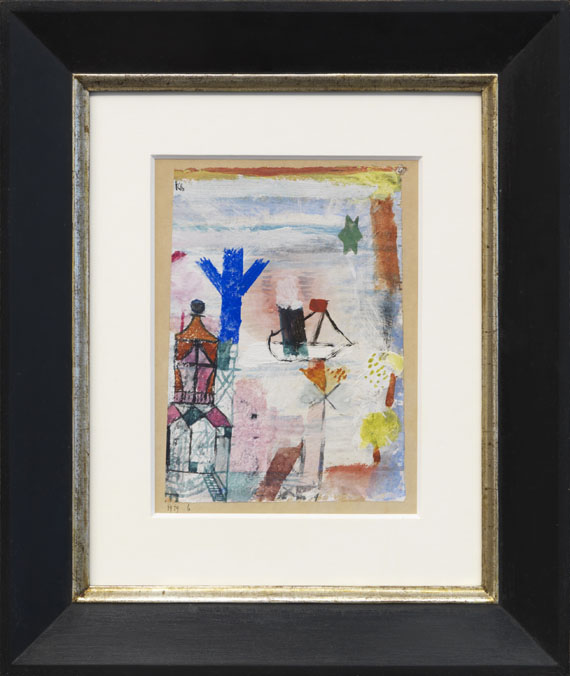 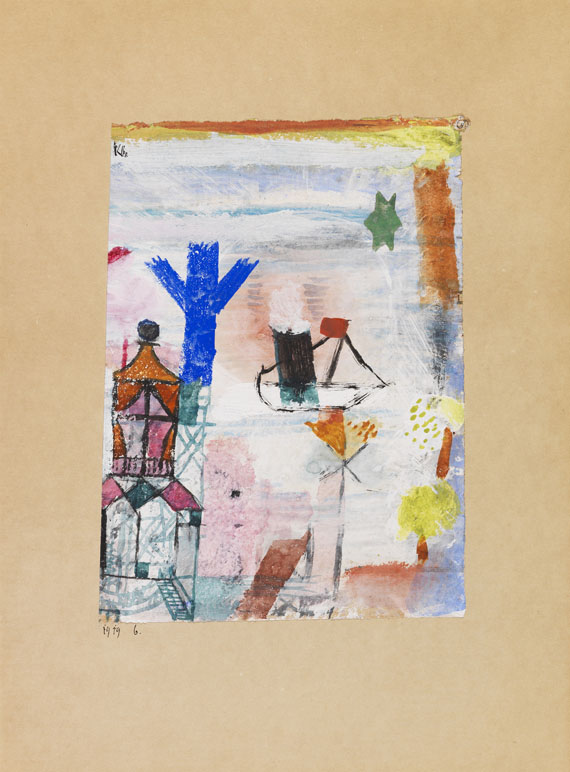 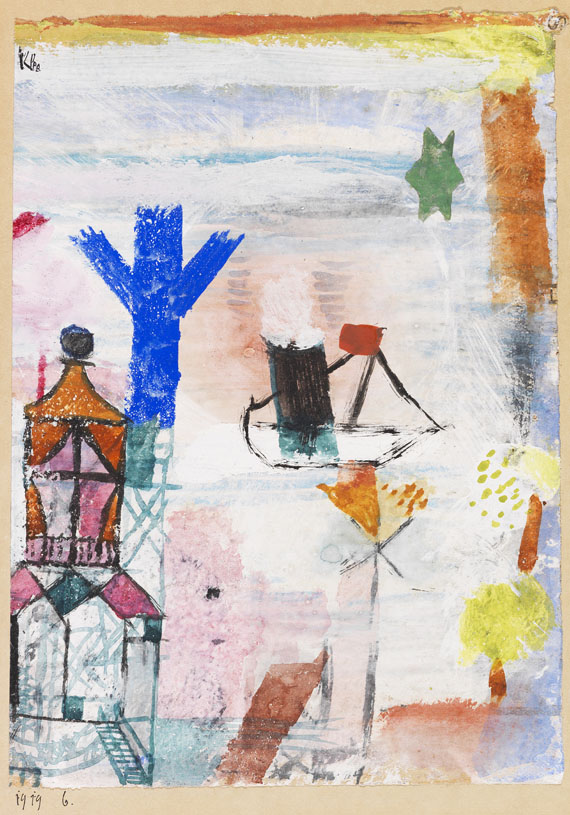 • In painting-like effect.
• A similar, slightly later watercolor is at the Metropolitan Museum in New York (Tale à la Hoffmann, 1921).
• One year after this work was made Paul Klee was appointed to teach at the Weimar Bauhaus.
• Exceptionally strong colors.
• Detailled yet expressive composition with a metaphysical-dreamy narrative notion.
• From Erich Heckel's estate.

When looking at the fantastic, poetic, sometimes magical compositions by Paul Klee, it is hardly possible to ascribe them to the prevailing artistic tendencies and artist groups of his time. From early on developed his own, experimental and unmistakable understanding of art. In a deeply subjective way, it combines abstraction and figuration, analytical, detailed compositions and an expressive visual language as well as symbols and strictly geometric shapes, and at the same time a metaphysical, dreamy narrative level. At the time the work offered here was created the artist stood at the beginning of his great career and can already look back on his first commercial successes on the art market. In 1917 he sold more works than ever before. In 1918 he was in question as possible successor to Adolf Hölzel for the director‘s post at the Stuttgart Art Academy, but the academy‘s professors consider him unsuitable, judged his work as too "dreamy", too "playful" and finally denied him his teaching skills (quote from: Boris Friedwald, Paul Klee. His life, his art, Munich 2011, p. 91). In 1919, the year our work was created, he was able to exhibit together with Kurt Schwitters at the Sturm Gallery in Berlin and devoted himself to the preparation of the grand retrospective of his work at Galerie Hans Goltz in Munich the following year. A first comprehensive monograph on Paul Klee by Leopold Zahn was published, and a little later, in October 1920, Walter Gropius finally appointed Klee to teach at the Bauhaus in Weimar. After the chaotic, apocalyptic and cruel years of war, many artists, and especially the Expressionists, turned to a metaphysical worldview. Paul Klee also believed that the real world can only be understood as a simile for the actual, the spiritual world behind it. Klee himself explains: "Art does not reproduce what is visible, it makes it visible." (ibid.). The almost painting-like work offered here shows, among other things, Klee's intensive examination of the literary work of E. T. A. Hoffmann (1776-1822). In the stories of the romantic writer and poet the artist found a tendency towards the irrational and spiritual, which was also part of his own life and can thus also be traced in his works. Similar to the fantastic, even surreal works by Hoffmann, Paul Klee's works tell a dream-like, poetic story far away from earthly reality. Without obeying the rules of spatial perspective, naturalistic representation or an orderly structure, the artist creates an unusual painterly construct from individual, partly isolated, brightly colored, also superimposed figurative elements and symbols, as well as a delicate, translucent mist of color that dreamily transfigures the pictorial components. The viewer is invited to open up the picture with the help of a completely new understanding, to combine the fragments with one another, to recognize connections, but still let the imagination run wild and to understand the picture as a nested narrative in which the reader cannot foresee what to expect on the following pages. [CH]
More Information
+
Sell
Get a free appraisal for a similar object!
+
Register for
Paul Klee
+
Buying from A-Z
+
Contact a specialist
+
Paul Klee Biography
Share