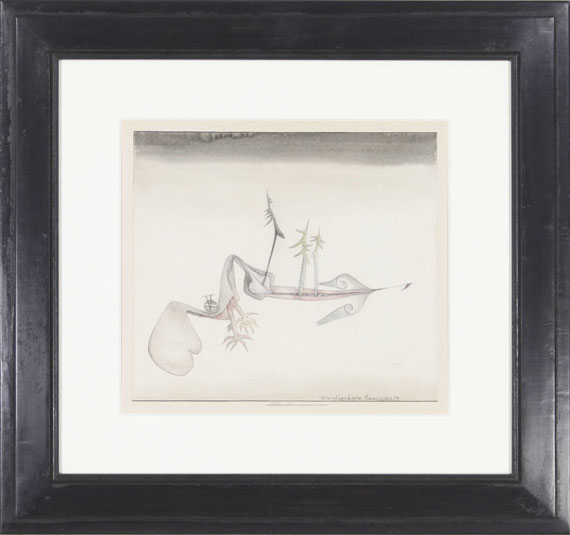 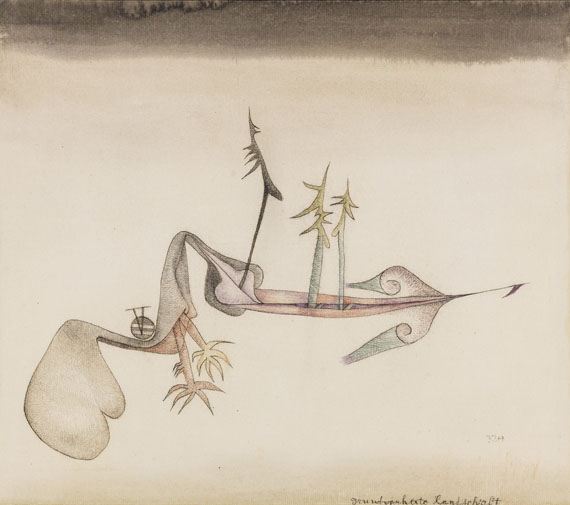 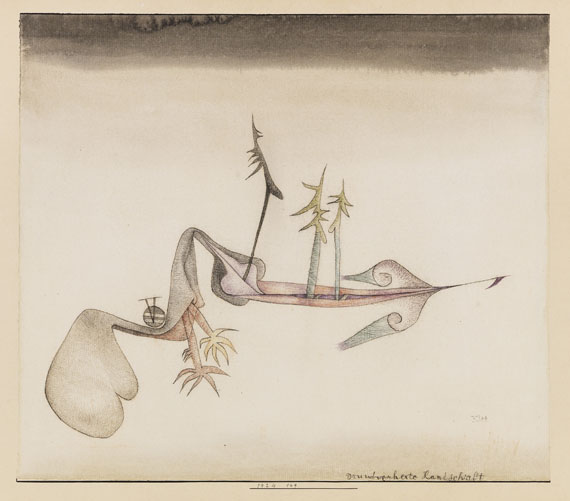 Deciphering Paul Klee's pictorial inventions mostly is a speculative endeavor. If we take a closer look at the seemingly surreal "Grundverhexte Landschaft", a look at the lecture given by Klee in Jena in 1924 is quite helpful for an analysis. The lecture comprises a section titled "From the exemplary to the archetypal!" in which he explains: "The artist who gets stuck somewhere in the process becomes presumptuous. But those artists who continue the quest for the mysterious origin where primordial law feeds all creation are really qualified. […] Who would not want to dwell there as an artist? In the bosom of nature, the origin of creation, where the secret key to everything is kept? "(Paul Klee, Über die moderne Kunst, Bern 1945, p. 47). Of course, Klee's remarks on modern art are also borne by his seemingly endless poetry. In a way it may reflect his teachings at the Bauhaus, which he had developed for his students. And yet one can almost literally use this short passage as a basis for a decryption of "Grundverhexten Landschaft" in order to coax meaning out of this "fantastic" landscape. It is not decprypted, even if an abundance of associations emerges the longer we look at this structure floating in space. One could begin with a primordial bubble filled with life-giving plasma and floating in a gigantic cosmos, and a line along which microorganism perform photosynthesis in order to enable the ancestors of plants and animals to grow. In the end, Klee transfers the line, enriched with erotic references and provided with stabilizing structures, in a precisely targeted direction: According to the theory of evolution, the goal would be the birth of the primates. Is Klee‘s drawing the beginning a shortened evolutionary line for the development of the earth? Maybe. "It will not occur to anyone to ask the tree to form the crown in the same way as the root," said Klee in his lecture. "Everyone will understand that there cannot be an exact mirror relationship between below and above. It is clear that the various functions in different elementary areas must produce lively deviations." (Paul Klee, Über die moderne Kunst, Bern 1945, p. 13). “Grundverhexte Landschaft” is an astonishing structure that hovers somewhere in the vast galaxies and gives us a dreamlike encounter with Paul Klee's intriguing discovery. [MvL]
More Information
+
Sell
Get a free appraisal for a similar object!
+
Register for
Paul Klee
+
Buying from A-Z
+
Contact a specialist
+
Paul Klee Biography
Share