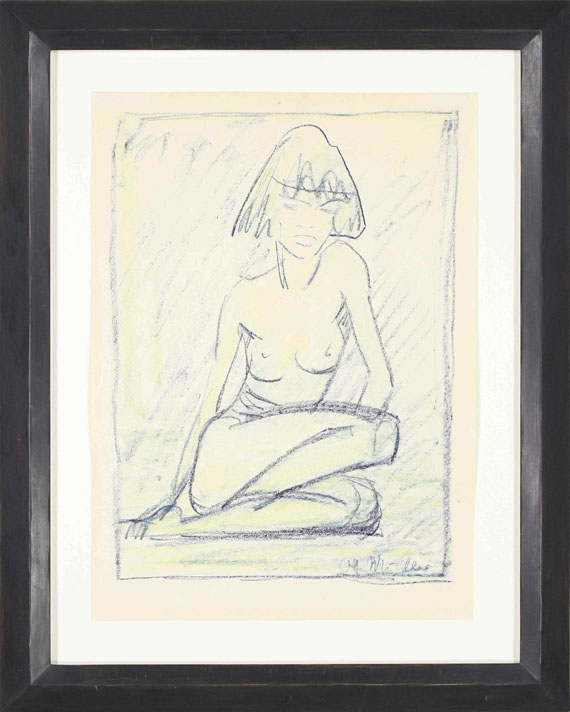 • Characteristic chalk drawing in subtle palette.
• Owing to the clear outlines tantamount to a painting.
• Family-owned for nearly 70 years and not exhibitied for 50 years.
• Mueller is a master in staging balanced narrations of beautiful bodies and in working out the proportion as the measure of all things.
• To Mueller it is about existence and the female figure. In her he finds Eros and beauty in an idealized and reduced form.

The female nude, the nude indoors and the nude in the landscape are characteristic and deeply anchored in Otto Mueller's work. The artist addressed the theme "Akt in der Landschaft" (Nude in the Landscape) in a variety of ways: He varied between pure figure studies, surrounded by suggested meadows and bushes, or extensive landscapes with dunes, enchanted ponds and under groups of trees animated with isolated figures. Nudes like in our drawing “Sitzender weiblicher Akt” (Seated Female Nude) are rather rare, their subtle execution is very direct and much more intimate. Mueller always used to depict his partners, such as his first wife Maschka Meyerhofer, with whom the artist maintained close contact even after they had divorced in 1921, or Irene Altmann, with whom he had an unfulfilled love relationship at the beginning of his professorship in Breslau in 1919, and from 1921 Elisabeth Lübke, Mueller's second wife and mother of their son Josef, and finally Elfriede Timm from 1927. A personal relationship with the model - here Elsbeth - is extremely important to the artist for such a close vision. Sometimes Mueller also used photos, at times even a manikin to simulate the movement and grace of his models in an imaginary way. These are not spontaneously rendered scenes like those that Ernst Ludwig Kirchner or Erich Heckel created in their studios and which would be of great significance for the famous expressive "Brücke" style. Mueller was rather occupied with balanced narratives of very beautiful bodies and emphasized the proportion as the measure. Mueller was concerned with the being and the shape of women as it offered him eros and beauty in an idealized and reduced form. His personal idea of the female body in perfect movement or, as it is the case here, gracefully seated in front of the artist, rendered with a few concentrated strokes with blue chalk, while the room is define with a little yellow. The artistic examination of the female body is invigorating for the artist and he allows us, the viewers, to share this sensation with him. In the search for the self, in the search for the humane, Mueller found his artistic motivation. And the thought arises that it might have been Mueller's intention to create “archetypal images” in this balance. On his path he was accompanied by artistic role models, the keen observation of female bodies, the strong influence that women always had on him, as well as by his constant self-reflection. [MvL]
More Information
+
Sell
Get a free appraisal for a similar object!
+
Register for
Otto Mueller
+
Buying from A-Z
+
Contact a specialist
+
Otto Mueller Biography
Share