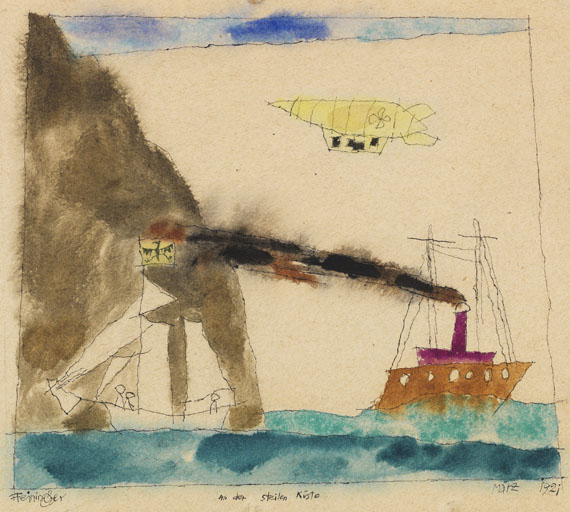 • For the first time offered on the international auction market.
• The year this work was made Feininger taught at the State Bauhaus in Weimar.
• Particularly detailled execution.
• "An der steilen Küste" is a wonderful example of Feininger's subtle humour.
• Sailing boat - steamer - blimp: Remarkable document of Feininger's fascination for technology.

"Countless images pop up in my imagination, I so strongly long to realize all these visions, it's like clutching at this life with all its memories [..] Since the war, since 1914, I have not experienced such visions and urges coming over me.“
(Lyonel Feininger to his wife Julia on September 9, 1922)

Essay
This watercolor, entitled "An der steilen Küste" (On the Steep Coast) is a wonderful example of Feininger's subtle sense of humor. Through the naive, bizarre depiction of the ships and the zeppelin, this sheet shows a cheerful, imaginative episode. A steamer with full rigging stomps through heavy seas, black clouds of soot are blown away by the wind and enwind a sailing boat with a square-shaped, yellow pennant that carries a stylized creat of an imperial eagle. A zeppelin resembling a submarine hovers above the scene. As it is so often the case, Lyonel Feininger's drawings and watercolors are about a more distant reflection on reality. They allow him not to get lost in them, but to discover cosmic connections instead . And this one is about ships: sailing ship, steamer and airship. And it's about the sea, for Feininger a synonym for mysterious vastness and infinity. Feininger's fascination for the sea can be traced back to his earliest youth, as can his love of model shipbuilding, as shown by the detailed drawing of the sailing ship with jib boom and corresponding foresails, and rigged steamers still common in the 19th and early 20th century. On top of all the airship connects Feininger's vision of moving technology between sea and sky. Feininger renders this harmony with particular sensitivity in this wonderful watercolor over a fine pencil line. With the thin, translucent application of the colors he creates a fascinating connection, it guarantees airiness and transparency, which he increases to an almost immaterial state far from an exact representation of the things. With his watercolors in particular, Feininger succeeds in conveying a floating between reality and vision, near and far, as well as an abstraction of reality. The meeting of these three ships thus appears to be constructed in fictional realms, it arises from the interplay of many sketches that Feininger made during his stays on the coast of the Baltic Sea. Feininger's appointment as master graphic designer at the Bauhaus in Weimar in 1919 brought him the long-awaited recognition as an artist. The teaching activity brought the artist close to motifs he had frequently visited over yers, such as the churches of Gelmeroda, Vollersroda, Umpferstedt or Mellingen. In the summer months Feininger went to the Baltic Sea, for example to Timmendorf, and in 1921 also to Heiligenhafen on the eastern tip of the Wagrien peninsula and visited the island of Fehmarn. For Feininger, the proximity to the sea meant a great quality of life, and it meant ships, ships of all kinds: small cutters, large cargo steamers or elegant sailing yachts, and sometimes even airships. [MvL]
More Information
+
Sell
Would you like to sell a similar object?
+
Register for
Lyonel Feininger
+
Buying from A-Z
+
Contact a specialist
+
Lyonel Feininger Biography
Share 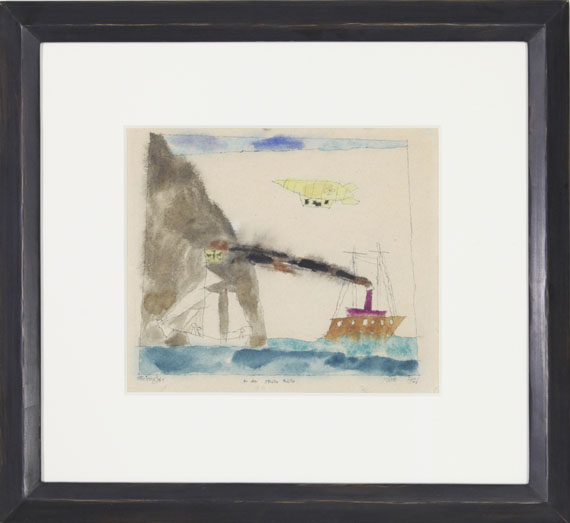 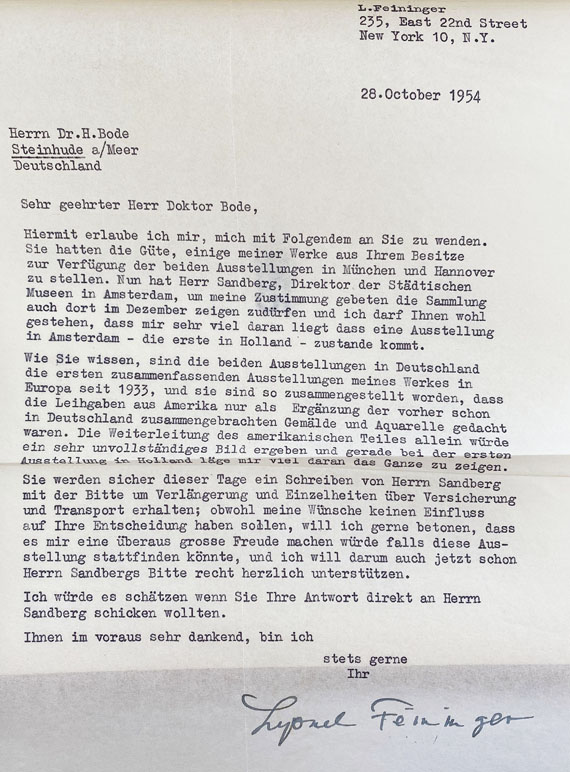