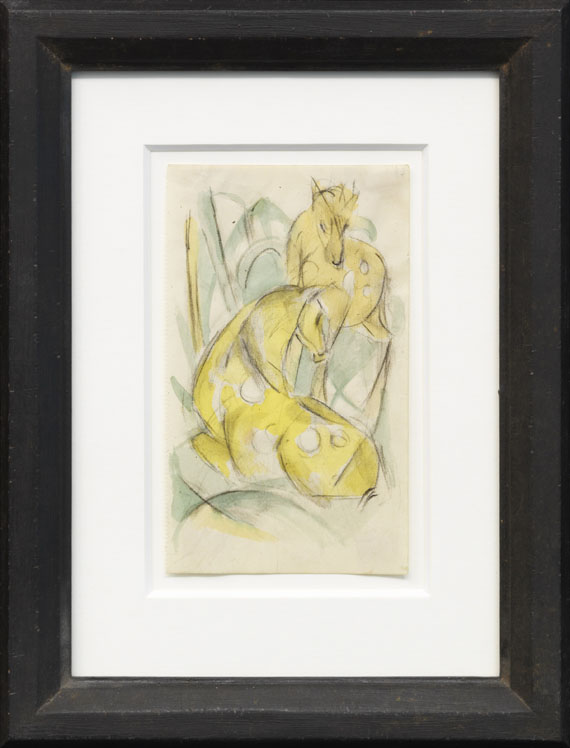 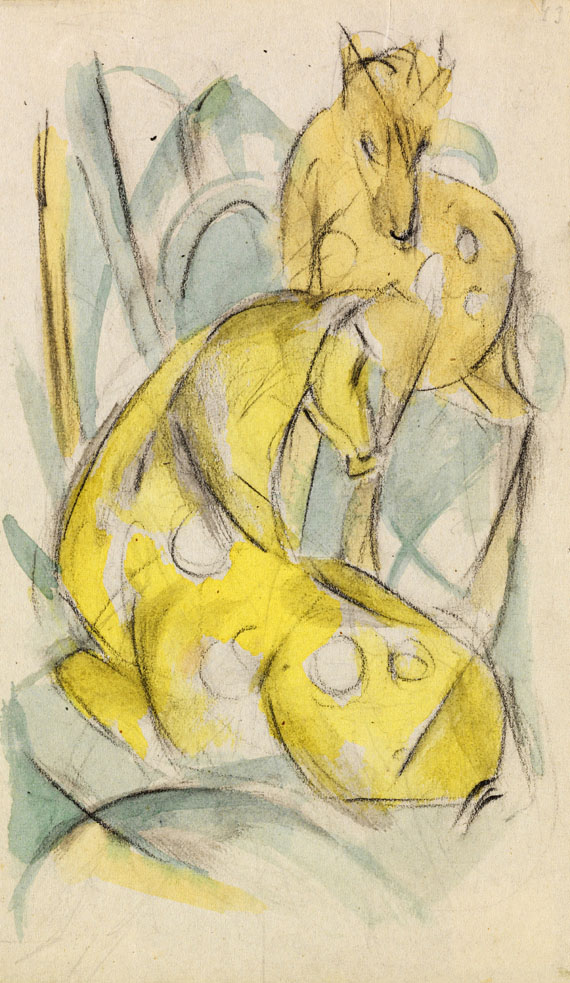 • Watercolors in this format are considered the artist's most poetic works.
• From the possession of the artist's family it remained part of the Collection Ilse and Hermann Bode up until today.
• On permanent loan at the Sprengel Museum, Hanover
• This watercolor was made during the era of the "Blauer Reiter"
• Works from the best period and in this nearly original condition are extremely rare on the market.

When looking at this watercolor - in a format slightly larger than a postcard – we realize how Franz Marc once again succeeded in conveying the sensation he got from the mysterious creative powers of nature to us. We are moved by the grace of the representation, impressed by the sublime shapes of the animals‘ bodies in an imaginative landscape, impressed by the effect of the finely set colors. The artist's work was inspired by profound feelings for the animal, which instinctively moves in nature, merges with it, and in all of this, the artist's observation appears t be out of this world: “Is there a more mysterious idea for an artist than this: How is nature reflected in the eye of an animal? How does a horse see the world or an eagle, a deer or a dog? How pathetic and soulless is our convention to place animals in our concept of a landscape instead of immersing in the animal's soul in order to get an idea of its image circle. [..] What does the deer have to do with the world as we see it? Is there any reasonable or even artistic sense in painting the deer as it appears to our retina, or in a cubist form, because we feel the world in cubist terms? Who says that the deer feels the world in cubist terms; it has a sensation of the world in 'deer' terms, so the landscape must be 'deer'. That is its predicate”, wrote Marc in 1911/12, thoughts that Maria Marc published in 1920. (Quote from: Franz Marc. Briefe, Schriften und Aufzeichnungen, published by Günter Meißner, Leipzig 1989, p. 233) Franz Marc took natural science very seriously, burying himself in the spirit of animal symbolism, which enabled him to indulge in his at times dreamy idea of an original world in a romantic and poetic manner. This way Marc rendered the yellow deer in circular, geometric lines that he derived from the animals‘ posture. The hilly landscape in fore- and background is incorporated in this rhythm of round shapes and gets into a circular movement developed from the shape of the animals‘ bodies. The artist united animals and their environment in a synthesis that pervades all levels of the picture, using a soft, flowing, organic formal language borrowed from Cubism. Franz Marc was fascinated by the cubist design and its quality to enhance the content, to concentrate it and to fill it with its symbolically charged colors. Last but not least, the color palette plays a highly symbolic role in his compositional worlds, such as the yellow in the work offered here: "Yellow is the feminine principle, gentle, cheerful and sensual," wrote Marc in a lengthy reflection on color theories in the 19th century in a letter to his recently won friend August Macke in Bonn from December 12, 1910 (August Macke, Franz Marc, Briefwechsel, Cologne 1964, p. 28). [MvL]
More Information
+
Sell
Get a free appraisal for a similar object!
+
Register for
Franz Marc
+
Buying from A-Z
+
Contact a specialist
+
Franz Marc Biography
Share