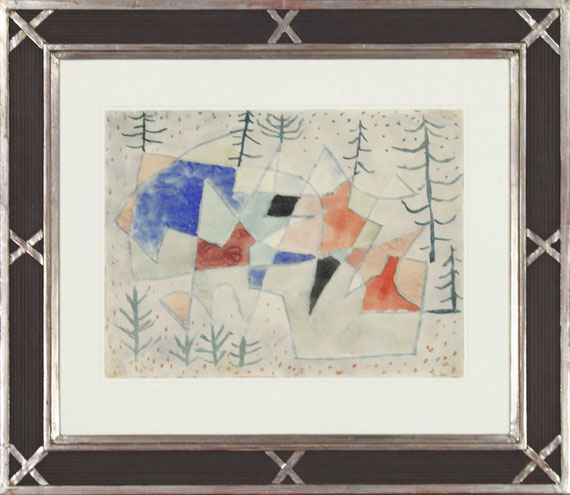 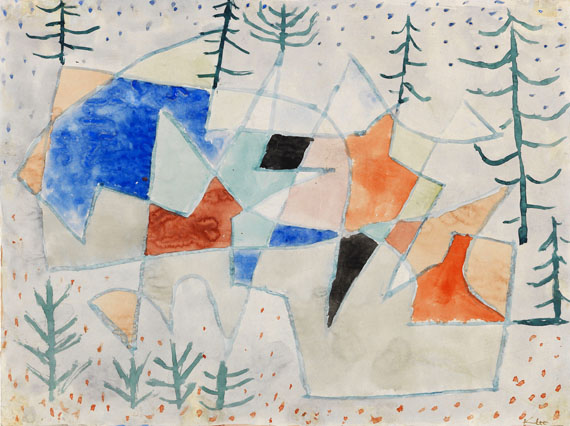 It seems that Klee did not feel threatened after the Nazi takeover in late January 1933; the graphic sheets he made around those days do not reveal any respective information. In early April, Hitler had become established politically and extensive changes in social life began to show, Klee reacted fiercely to the new situation: With an extensive group of works of strongly gestural drawings, he took a clear stand on the development: ”Erneuerung der Mannszucht“ (Renewal of Discipline) and ”Wenn die Soldaten degenerieren“ (When Soldiers Degenerate) are the titles of the first drawings in the series of the "Revolutionsblätter" (Revolution Sheets ), as the sculptor Alexander Zschokke, who was a friend of Klee in Düsseldorf and a teacher at the academy, once called them. In the first quarter of the year Klee produced largely abstract, very colorful works, mostly watercolors or occasionally cool, graphically balanced drawings with combined characters or continuous threads, “lines supposed to be straight”, slightly curved lines that represent a star, a framework or, as it is the case here, describe a landscape, "filled in" with delicate patches of color, the form of the statement is rhythmic like a mosaic, a form that lies serenely and shines like a large, fantastic being in the middle of a forest: the dark blue shines intensely and is supported by the light red alternating with a rather warm orange and a cool light blue. “For Klee, the colored light space is more of a spiritual than a physical phenomenon, it is reflected in it, and the scheme does not presuppose any other world of appearance than that which lives in it. There is no outside and inside ”, wrote the art historian Will Grohmann in the monograph from 1954 (p. 281). On September 21, 1933, Klee reported from Düsseldorf to his wife in Basel about his current work: “It is clear that I am the most unsuitable for reporting, because there is nothing happening at all, except for the all too familiar inner life with its knockdowns. […] Otherwise I would tell you about pictures, if only I could. At the moment I work solely in color and do a few light-dark contrasts, preferably none at all, but that doesn't work; this way I play around a basic tint, at times gray, red, or blue. Most of the time it worked out for the better, but it was very exhausting and the time passed even faster than usual. ”(Quote from: Ex. cat. Paul Klee 1933, Munich 2003, p. 292). Klee's assessment of his artistic work also applies to the watercolor "Edelklippe" and its blaze of colors. [MvL]
More Information
+
Sell
Get a free appraisal for a similar object!
+
Register for
Paul Klee
+
Buying from A-Z
+
Contact a specialist
+
Paul Klee Biography
Share