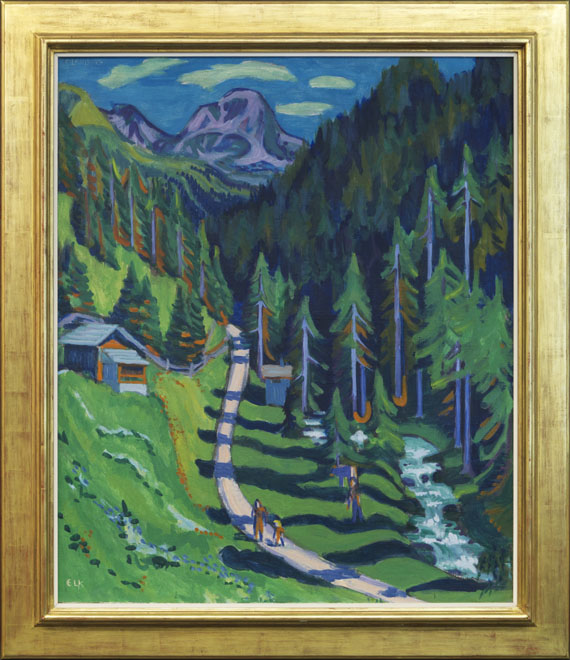 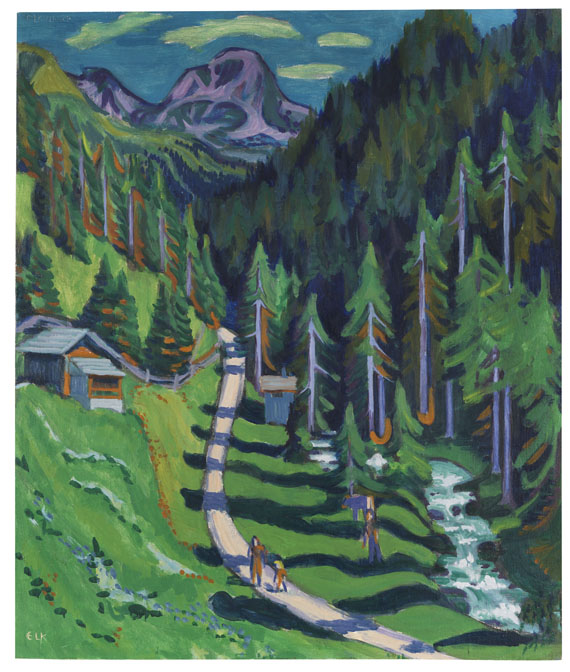 • Exhibited at the Kunsthalle in Basel the year it was made.
• From the renowned Kirchner collection of Dr. Bauer, Davos
• According to Gordon one of Kirchner's last works.
• The defamation of modern art and the events that took place in Germany in the summer of 1937 deeply unsettled Kirchner, however, this view of the Sertig Valley seems more than conciliatory.
• Made in the seclusion of Kirchner's last resort, the "Haus am Wildboden" near Davos, where Kirchner committed suicide in 1938.

We are grateful to Dr. Wolfgang Henze, Wichtrach/Bern, for his kind expert advice.

"He entirely [..] adapted to his surroundings and still lived in the simple old mountain hut among the mountain people, just like one of them. He made friends with the mountain folk through his thirst for freedom, his feeling of equality with others, his great love for nature and animals. They accepted him, they helped him to paint and draw again, and to continue his work."
Henze 2002, quote from Matthias Frehner et al., Expressionismus aus den Bergen, Bern 2007, p. 23.

The path along the Sertigbach (Sertig creek) runs through the Sertig Valley in south-eastern direction just below Kirchner's house. In the background on the right we see the peak Piz Ducan, on the left the Mittaghorn, both towering just over 3,000 meters. Kirchner painted the valley for the first time in the summer of 1924, a horse pulls a carriage with two farmers up a path leading to the isolated houses on the edge of the pasture, just in front of a mountain forest. Summer colors characterize the romantic mountain ambiance, it is the time when Kirchner paid homage to the mountain farmers with panoramic, large-format landscapes, such as it is with the paintings "Alpsonntag" or "Sonntag der Bergbauern".
In 1937, 14 years later, Kirchner's palette seems to have evolved into a lush green, alternating with a light haze of blue, corresponding to the midsummer weather and temperatures: In a scorching afternoon heat the trees cast their shadow over the gently sloping path that runs right through the gentle, hilly meadows. The two figures, one taller than the other, perhaps a man with a child or a woman with a child who walk the path cast their short shadows. Everything seems almost in perfect order; the pine trees grows without clear contours along the valley‘s slopes all the way up to the up to the timberline, framing the view onto the rocky mountain range. The bright blue sky is enlivened by clouds that reflect the green of the mountain slopes. Kirchner always knew how to incorporate familiar observations - like the view from his studio in this work - into a uniform pictorial structure in which the green and blue merge into a unique coloristic sound with less delicately set orange-red light contrasts.

For almost 14 years Ernst Ludwig Kirchner saw the peaceful valley lying in front of him. Every day, at any time of the day and any time of the year, in a wide variety of weather conditions he observed the paved path leading up in a gentle curve and the creek cascading down the mountain between the conifers. In September 1923 the Kirchners had to leave the house "In den Lärchen"; and they began to look for an alternative residence which they found in form of an old Walser farmhouse on the Wildboden at the entrance to the Sertig Valley. It belonged to the general owner of the Wildboden, the farmer Louis Oberrauch, who charged them an annual rent of 240 Swiss franc for house and garden. Before they moved in they had to do a little work on the house. The window of the chamber facing East, which Kirchner wanted to use as his studio, was enlarged. “Our new house is a real pleasure. We will have a good life there, everything will be in a great new order. This is definitely going to be a turning point in my life. Everything has to be put in a clear order and the house itself has to be furnished as simple as possible, but also beautiful and cozy”, Kirchner wrote in his diary on September 7, 1923 (Davoser Tagebuch, Stuttgart 1997, p. 69). Once again the artist enjoyed an unobstructed view of the mountains. From the narrow porch in front of the house Kirchner looked down into the Landwassertal and up to the Stafelalp, his previous home, over to Frauenkirch and in western direction all the way to Davos Platz.

The Wildboden, a flat grassy moraine, is a plateau just below the settlement of Clavadel. It is located on a delta of a prehistoric lake extending from the Wofgang Pass to Monstein. “Wilde”, as the Wildboden is called, as it is exposed to the cold and ‘wild‘ northerly wind, so strong that Kirchner's house was often covered in deep snow in winter, which also had an impact on the management of the arduous daily chores inside the house. However, Kirchner's vigor remained unaffected: He set up a painting studio and a print-shop on the upper floor, as well as a sculpting studio in the adjacent stable. He decorated the fence in front of the house with figures he had carved himself. And - Kirchner becomes a little more urbane again - he visited the cafes in Davos, traveled to Basel, Chur and Zurich, published articles, participated in exhibitions and corresponded with his doctors, as well as with a large circle of personalities from the art scene who also visited him at his mountain home. Among them notable names like Gustav Schiefler, Carl Hagemann, Alfred Döblin, Fritz Winter, Oskar Schlemmer, Jan Wiegers, the art dealer Curt Valentin, the museum director Wilhelm R. Valentiner and the dancer Gret Palucca. Young artists like Albert Müller, Werner Neuhaus and Hermann Scherer gathered around him and founded the artist group "Rot-Blau". In December 1925, shortly before Christmas, Kirchner left for Germany one last time and visited the places that were significant for his life and career, Chemnitz, Dresden and Berlin. In 1931 Kirchner became a member of the Prussian Academy of the Arts; he had become established, from 1925 on he went with the trend and created more abstract and theoretically founded art; a development that lasted well into the 1930s. The major exhibition at the Kunsthalle Bern in 1933 was crowned with success, followed by exhibitions in Detroit and New York in 1937. For Kirchner, the change from a "simple" life in the hut on the Staffelalp to the comparatively generous house "In den Lärchen" and on to a rather bourgeois existence not far from Davos was still accompanied by the ideal of a simple, unconventional and authentic lifestyle. For him the world of the mountains and the life of the peasants remained a form of desirable existence, however, Kirchner could only find his place as an admiring spectator, and as a sensitive artistic chronicler on the fringes of this mountain society. Kirchner lived in this second house on Wildboden near Davos for most of his life until his death in June 1938.

A different point of view

A very topical event could be hidden behind the balanced, almost dreamy view from the studio‘s window onto the way up the valley to Sertig village: the ongoing cultural-political changes in Nazi Germany. Contrary to a previous struggle for modernity, its defamation had taken place over the past few years, leading to vigorous confiscations in museums and hitting rock bottom with the defamatory “Degenerate Art“ exhibition in Munich in July 1937. These events deeply unsettled the artist, making Kirchner's view of the landscape appear even more conciliatory. He is at peace with the plot of land surrounding his house, his homeland for almost 20 years, day by day giving him the strength to work, draw, carve and paint. We don‘t know how Kirchner really felt about the ongoing events. On July 28, 1937, he wrote a rather restrained note to his friend, the collector Carl Hagemann: “Dear Doctor, a lot has happened in the meantime, sad things and some things alss out of revenge. Poor German art, that always had to suffer so much, not only in our time, but also in the past. The judgment on them will only be passed in the far future. In the meantime we can just do our work, work as intensely and good as you can. I feel better, my health is atble while i am still a little weak and thin as last year‘s intestinal disease took its toll, but my work keeps me going, there is so much on my mind, so much I want to do ”(Briefe an den Sammler und Mäzen Carl Hagemann, Ostfildern-Ruit 2004, p. 669). [MvL]
More Information
+
Sell
Get a free appraisal for a similar object!
+
Register for
Ernst Ludwig Kirchner
+
Buying from A-Z
+
Contact a specialist
+
Ernst Ludwig Kirchner Biography
Share