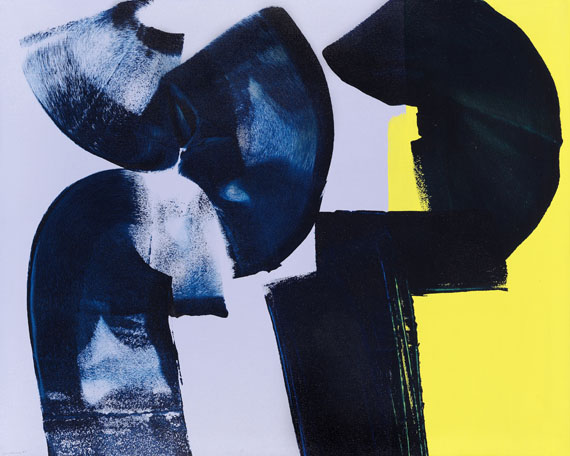 • Hans Hartung is one of the most important representatives of European Informalism and one of the most influential protagonists of the École de Paris.
• The Musée d’Art Moderne de la Ville de Paris lately honored the co-founder of German Informalism with a grand retrospective (October 11, 2019 - March 1, 2020).
• Through the aggressively staged large blue and black signs the artist suggests a perspective of a three-dimensional and vivid color space. Thus the abstraction is like a conversion of inspirational sensation.

The work is registered in the archive at Fondation Hans Hartung et Anna-Eva Bergman and will be included into the forthcoming catalog raisonné.

"I am always, always looking for a law, the alchemic rule that can turn rhythm, movement and color into gold; to transmute apparent disorder with the sole aim of conveying perfect movement and so creating order in disorder, and order through disorder." (Hans Hartung, quote from Jennifer Mundy, Hans Hartung. Works on Paper 1922-56, London 1996, p. 20)

"The pictorial means come to the fore as the painter's language", said the art historian Will Grohmann, "that at first one only sees them. Rightly, because they are more than mere means, they reflect what we used to describe as a personal expression". The composition "T1975" shows a figurine in front of a light purple and yellow, background that looks like a light box, developed by Hartung in almost parallel manner and applied with a rubber roller. "T1975" is typical of the time and the audacious abundance of shapes and colors that Hartung combined in a harmonious concept. Since the early 1970s Hartung has been using tools like the rubber roller, which is actually a tool used to dye a lithographic stone in order to roll the color, often black and sometimes blue, onto a background evenly colored with a spray gun beforehand. But there is a lot more than the rubber roller: Hartung prepares various types of brushes, rollers, brooms, paint brushes, scrapers, spatulas, fans and much more devices with which he achieves amazing effects. He developed a technically variable system with which he formulated the grand gestures in his pictures. But his painting is not limited to its tools; like the rubber roller here, they serve him to make the painting process an experiment with unpredictable results. A painting process that he does not understand as an action with an unpredictable outcome, but rather as an experiment that can be precisely controlled to a certain extent - a technique that C.O. Götz has made his own with the squeegee, a technique which, not least, Gerhard Richter elevates to an eminently characterful image formulation. Dark colors, a black and a blue form, stand here against a light-flooded background. Precisely worked out extreme contrasts, an imaginary depth of space despite the two-dimensionality of the monochrome colors, provokes associations in the observer. With the help of these large black and blue, aggressively staged signs, the artist suggests a pictorial perspective, a deep and lively color space. So the abstraction works like a translation of an inspired feeling. [MvL]
More Information
+
Sell
Get a free appraisal for a similar object!
+
Register for
Hans Hartung
+
Buying from A-Z
+
Contact a specialist
+
Hans Hartung Biography
Share