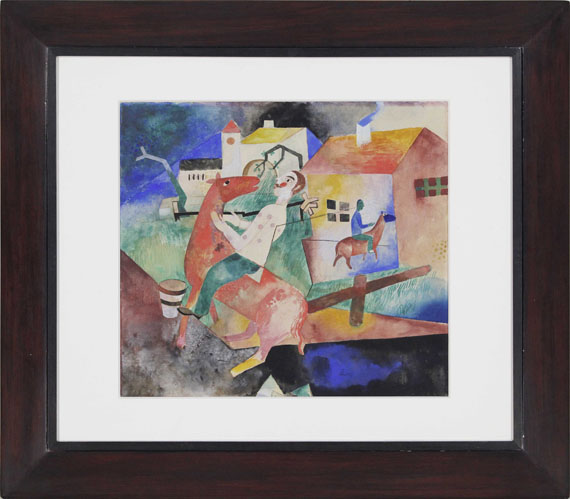 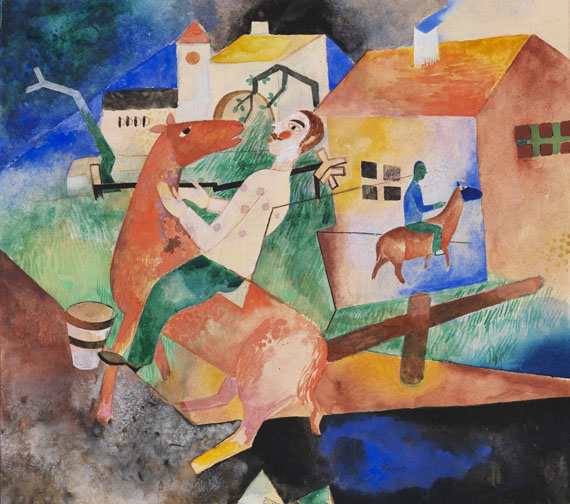 PROVENANCE: Galerie Alfred Flechtheim, Düsseldorf (around 1920, with crossed-out label on the backing board and with the hand-written registration number "2431").
Zinglers Kabinett, Frankfurt a. M. (before 1926, with the label on the backing board, there with hand-written title and inscription).
Galerie Gerd Rosen, Berlin.
Private collection North Rhine-Westphalia (since 1953, presumably acquired from aforementioned – until 2007).
Private collection Europe (in 2007 presumably acquired from aforementioned through Galerie Utermann, Dortmund).

Heinrich Campendonk, born in Krefeld in 1889, was one of the young talents of the "Blaue Reiter". In October 1911 the 21-year-old Campendonk traveled to Munich at the invitation of Franz Marc, where he and Helmuth Macke met the central driving forces of the association, Wassily Kandinsky, his partner Gabriele Münter and August Macke, for the first time. The group took a first picture together on the balcony of Kandinsky's city apartment, before Campendonk continued his journey to the idyllic village of Sindelsdorf, where Franz and Maria Marc, August, Elisabeth and Helmuth Macke lived and worked at that time. In Sindelsdorf Campendonk shared an apartment and a studio with Helmuth Macke. Kandinsky and Münter lived a few kilometers away in Murnau. Inspired by his older artist friends Campendonk began to make first works in reverse glass painting, a common technique in Bavarian folk art. Campendonk finally took part in the first two exhibitions of the legendary artists' association "Blauer Reiter" in 1911 and 1912, and in 1912 he also became a member of the group. The beginning of the First World War, however, divided the members of the "Blauer Reiter" who, like Franz Marc and August and Helmuth Macke, would soon volunteer for service, while the Russian native Kandinsky had to leave Germany. The fact that Campendonk refused to do military service and was discharged due to illness shortly after recruitment in the spring of 1915 made for a controversy. When, after August Macke (killed in 1914), Campendonk's former artistic patron and friend Franz Marc died at Verdun in March 1916, Campendonk was shattered. He then moved to a farmhouse in Seeshaupt on Lake Starnberg, where he lived in seclusion trying to suppress the horrors of war. In this remoteness he was able to decisively emancipate himself from the style of the "Blaue Reiter" and found his own subtle visual language. Once again he worked up inspirations from Bavarian votive pictures and from 1918 on created spaces of light in his watercolors and paintings that seemed to corresponded to his extremely sensitive perceptual ability. The central subject of his work is the human being, surrounded by stylized animals, plants and abstract forms. But it is anything but an idyllic togetherness, rather a lack of relationship and isolation with which the expressionist artist and avowed and fervent European always expresses an invisible, latent threat, indirectly addressing the horrors of war. Campendonk's luminous watercolor "Der Reiter II", which was created a year after the end of the war, is certainly based on Kandinsky's famous cover design for the almanac "Der Blaue Reiter", as well as on his depictions of St. George, the much-celebrated Christian slayer of dragonms and evil, in the manner of Alpine reverse glass painting. But Campendonk does not show us a victorious Christian knight in 1919. His rider's lance is broken and evil evades any clear personification, it rather appears to be omnipresent. His rider returning home is marked by war and defeat, even though he leaves darkness behind him he immediately moves towards a new darkness. It is by no means unlikely that Campendonk could have indirectly addressed the new, ubiquitous threat posed by the Spanish flu. [JS]
More Information
+
Sell
Get a free appraisal for a similar object!
+
Register for
Heinrich Campendonk
+
Buying from A-Z
+
Contact a specialist
+
Heinrich Campendonk Biography
Share