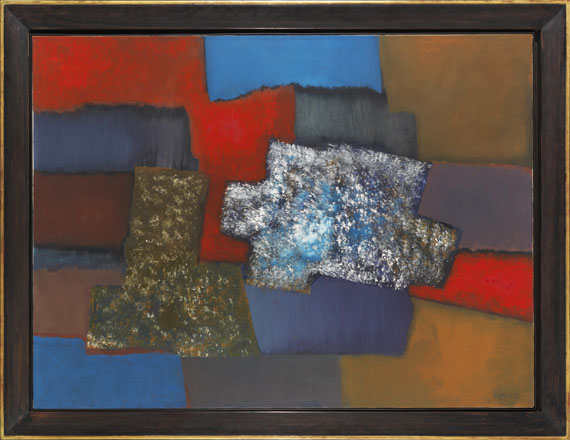 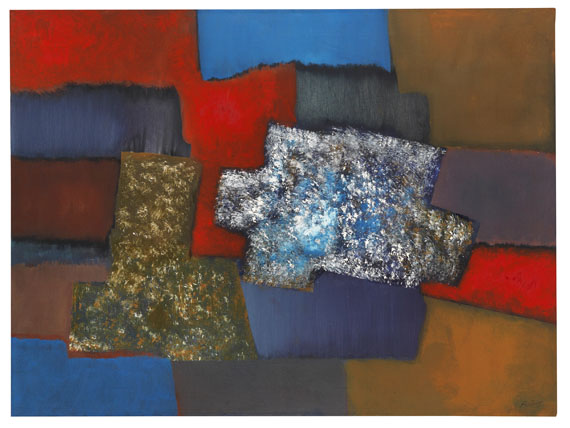 • Very rare composition from the series of the Rectangular and Serial Pictures which all have a crystalline bright white form in their center.
• In 2015 the Pinakothek der Moderne, Munich, dedicated an exhibition to the aspect of the emancipation and dynamization of the color in Fritz Winter's painting in the 1960s.
• With his participation in documenta I (1955) Fritz Winter was considered one of the leading figures of German Informalism and Abstract Post War Modernism.
• As early as in the 1950s Winter showed his works in the USA in two exhibitions at the Museum of Modern Art, New York.

With a photo expertise issued by Dr. Gabriele Lohberg, Krefeld, from April 24, 2021.

Trained at the Bauhaus in Dessau with Paul Klee, Wassily Kandinsky and Oskar Schlemmer, Winter's abstract painting was initially considered "degenerate" by the National Socialists, but soon after the war it became absolutely in vogue. In 1949 Fritz Winter founded, together with Willi Baumeister and Rupprecht Geiger, the "Gruppe der Gegenstandslosen" in Munich, later called "ZEN 49". Winter's rectangular and row pictures from the 1960s are particularly fascinating for their bright colors and their flat structure, which gives space to the pure sound of the colors. While the works from the 1950s are characterized by a more linear, gestural application of paint in he manner of Informalism, Winter's line structures from the 1960s begin to merge into powerful color surface structures with increasingly hardened contours. The two-dimensional composition of interlocking colored areas gets its structure and depth effect from the accentuation of the color values alone: luminous colors comes before muted colors, which optically fade into the background. Usually it is the luminous primary colors red and blue that move into the foreground and thus become protagonists of the abstract composition. However, Winter has rarely added a crystalline center to these two color values, which, thanks to its semi-opaque appearance, resembles the reflective surface of a gemstone. The softly spotted, opaque white with its icy, light blue accents not only attracts the entire attention of the beholder, but also reminds us of Winter's abstract early work of the 1930s / 40s, and above all of his famous series of works "Triebkräfte der Erde" (Driving Forces of the Earth, 1944), in which a crystalline white form in front of a dark background always forms the center of the mystical composition. Through the masterful control of his painterly means, Winter succeeds in creating a unique dynamization of color. Winter had several exhibitions in New York as early as in the 1950s, and in 1955 and 1957 his paintings were also on display at the Museum of Modern Art, New York, in the exhibitions "The New Decade" and "German Art of the 20th Century" along with works from Baumeister, Nay and Schwitters. In 1959 he took part in the documenta II in Kassel. By the 1950s Winter had advanced to be one of the leading representatives of German Informalism and abstract Post-War Modernism. Fritz Winter determined the transfer of a significant part of his artistic estate to the Bavarian State Painting Collections. Most recently, in 2018, the Pinakothek der Moderne, Munich, showed a large solo exhibition and three years earlier the exhibition "Fritz Winter. Die 1960er Jahre – Jahrzehnt der Farbe" (2015), which was dedicated to his famous rectangular and row pictures. [JS]
More Information
+
Sell
Get a free appraisal for a similar object!
+
Register for
Fritz Winter
+
Buying from A-Z
+
Contact a specialist
+
Fritz Winter Biography
Share