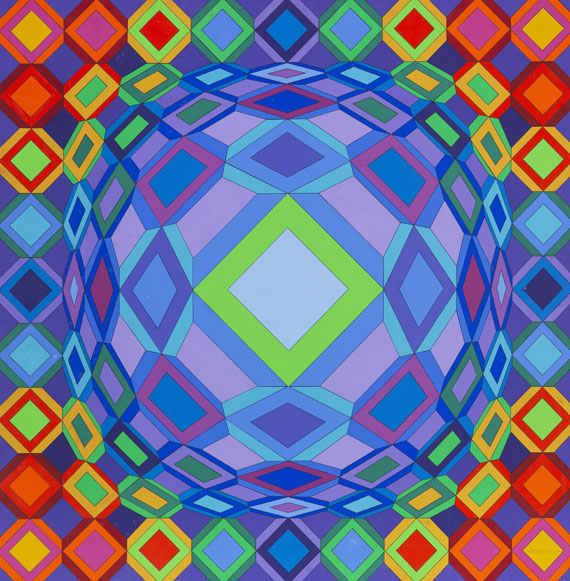 • Typical colorful example of the artist's signature style geometric abstraction.
• Using rectangular forms only, Vasarely creates the illusion of a three-dimensional, seemingly hovering sphere.
• Victor Vasarely is both founding member and most important representative of Op-Art.
• Between 1955 and 1964 Vasarely participated in 4 documenta exhibitions.

Essay
After Vasarely had devoted himself almost exclusively to monochrome works in black and white in the 1950s and early 1960s, he attained the psychedelic-colorful, abstract-geometric pictures in the series "Vega" in the following years. The series is characterized by colors pulsating with luminosity and intensity, properties which would determine his oeuvre and with which Vasarely initiated the beginning of Op Art. The work offered here takes up the core idea of the "Vega" work, because Vasarely put an apparently weightless spherical shape into an abstract color space in this work, too. But while the artist usually puts together different basic geometric shapes - circles, squares, rectangles and triangles - to create ingenious compositions, in the present work he only uses squares made up of several colored rings, some of which are slightly distorted. With exclusively rectangular shapes, Vasarely succeeds in capturing the illusion of a three-dimensional, apparently floating and even rotating ball on the canvas. The flat, two-dimensional image surface provokes the eye of the beholder and simulates a three-dimensional phenomenon that, for a brief moment, seems to expand the image carrier beyond its borders into a spatial structure. Once again, the artist makes the visual process, the irritation of the senses and the manipulable optical perception the subject of his impressive painting. A painting that is equally fascinating and understandable for everyone, regardless of nationality, origin, education and even without prior knowledge - according to Vasarely's democratic credo: "My goal is to create an art that is a common good and accessible to all . " (Victor Vasarely, quote from: Ex. cat. Vasarely. Erfinder der Op-Art, Ludwigshafen / Wolfsburg / Bottrop 1997/98, p. 183). [CH]
More Information
+
Sell
Would you like to sell a similar object?
+
Register for
Victor Vasarely
+
Buying from A-Z
+
Contact a specialist
+
Victor Vasarely Biography
Share 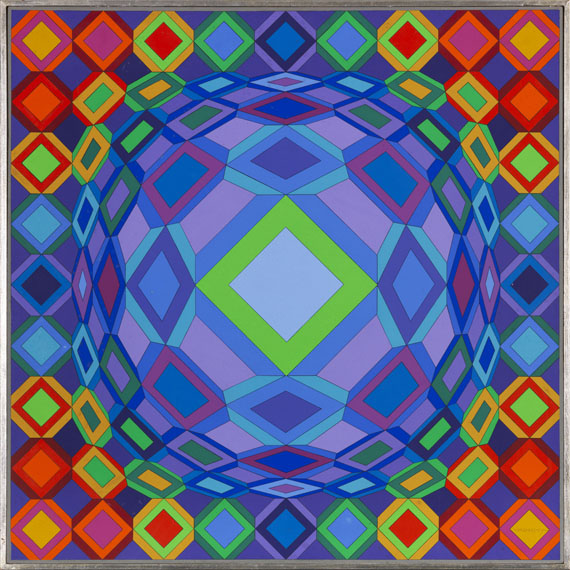