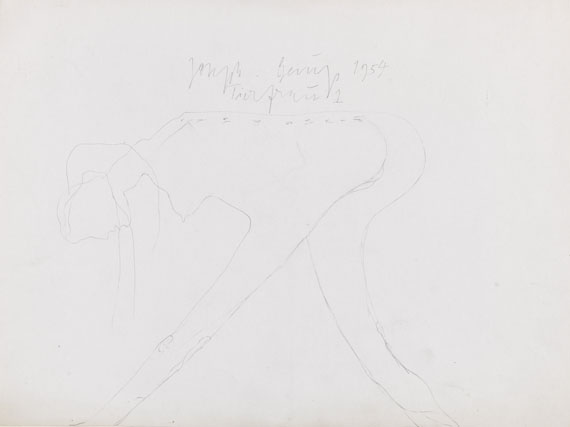 • Very early Animal Woman drawing.
• In 1954 Beuys had his first own studio in Düsseldorf-Heerdt
• Joseph Beuys’ drawings are very delicate and subtle
• The Animal Woman offers Beuys both spiritual and physical material.

PROVENANCE: Private collection Germany (acquired from the artist in 1978).

The subject of the animal woman appeared in Beuys' drawings as early as in the late 1940s, based on them he eventually created a bronze in 1984. As in the drawing offered here, the female figures in the early sheets are depicted in bent or upright posture. In the drawing "Tierfrau und Tier" from 1956, which was on an invitation card from 1974, the female animal and woman are shown in same bent posture. Physiologically, the breasts have moved from their position between the hind legs to the upper body in the course of evolution. A catalog of the Düsseldorf exhibition from 1991o fworks from the Collection Bastian shows a sheet in ‘Braunkreuz‘ oil paint from 1962, which, in return, takes up the motif of the stooped female figure. Beuys not only shows the connection between woman and Earth and the animal world, as the stooped female figure also alludes to the Greek goddess Gaia, the personification of Earth, the parturient, who creates life and also takes in the dead. Beuys said in an interview: “There are a lot of elemental things about women. Man has gone through a materialistic development on the principles of deat [..] That is why we now need the power that the woman has in her.” (Quote from: ex. cat. Joseph Beuys. Eine innere Mongolei. Dschingis Khan, Schamanen, Aktricen. Ölfarben, Wasserfarben und Bleistiftzeichnungen aus der Sammlung van der Grinten, Kestner Gesellschaft, Hanover, 1990, p. 211). [Eugen Blume]
More Information
+
Sell
Get a free appraisal for a similar object!
+
Register for
Joseph Beuys
+
Buying from A-Z
+
Contact a specialist
+
Joseph Beuys Biography
Share