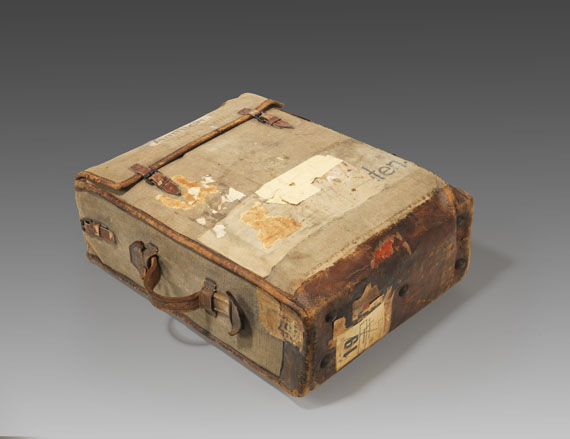 • A statement critical of the state.
• The authoritative character is questioned through the aspect of fugaciousness.
• A reinterpretation of the content that is typical of Beuys.

The container is a found object from before the war, a suitcase possibly even used by the military to transport files. Files sent by courier or rail freight that were marked “Amtlich” (Official) seem to have played an important role. Over time hey have gone lost and the suitcase has likewise lost its original function. Used boxes, suitcases and containers play an important role in Beuys' work. In many cases the artist revised them. In this work offered here Beuys was particularly startled by the note “Amtlich” in the surreal context of an empty, worthless suitcase. [Eugen Blume]
More Information
+
Sell
Get a free appraisal for a similar object!
+
Register for
Joseph Beuys
+
Buying from A-Z
+
Contact a specialist
+
Joseph Beuys Biography
Share