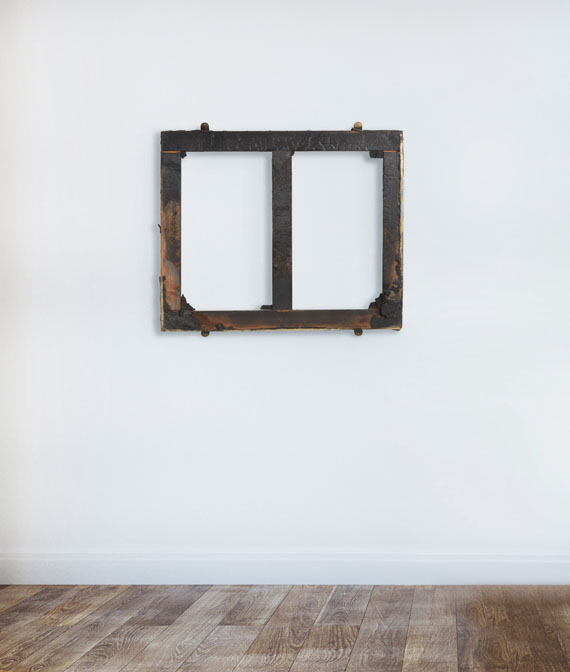 enlarge image
+
355
Joseph Beuys
Ohren, 1984.
Burnt stretcher, burnt canvas in plexiglass obj...
Estimate:
€ 70,000 / $ 69,300
Sold:
€ 83,750 / $ 82,912
(incl. 25% surcharge)
Ohren. 1984.
Burnt stretcher, burnt canvas in plexiglass object box.
Signed on rear of lower beam. 60 x 73 x 2 cm (23.6 x 28.7 x 0.7 in). 80 x 90 x 8 cm (31,4 x 35,4 x 3,1 in).
This work used to be the painting "Ferme à Montfoucault" by Camille Pissaro that caught fire from a single candle shortly before Christmas in 1984. The work is not listed in the Pissaro register from 1939, however, it appears in the revised version from 2005 with the number 379. When Joseph Beuys discovered the work at a restorer, he spontaneously renamed it "Ohren" (Ears) and signed it [EH].
• Ears: an outstanding example of Josef Beuys' progressive art concept that refuses to follow any convention.
• A painting by Pissaro destroyed by just a single candle is retransformed to an artwork through Beuys' processual conception.
• The perception of art's transformative mission to the exclusion of aesthetic relevance becomes manifest in the appreciation of destruction.
• The burnt door from Beuys’ studio in Heerdt, to which he added two hare's-ears and the skull of a heron (today: Museum moderner Kunst, Vienna), is a similar object.

Accompanied by an expertise issued by Eva Beuys on February 7, 1990 (copy mounted on rear of the object box).

“My objects must be understood as suggestions for implementing the idea of the sculpture. They should provoke thoughts about what a sculpture can be."
Beuys 1979, quote from: Volker Harlan, Was ist Kunst? Werkstattgespräch mit Beuys, Stuttgart 1992, p. 13

The sad story of a picture by Camille Pissarro that was destroyed by fire from a single candle on Christmas Eve in 1984 prompted Beuys to reanimate the worthless ruin. According to the owner, the brass security eyelets, which are also called ‘ears’ by exhibition specialists, persuaded Beuys to give this tragic piece the title “Ohren” (Ears) and to leave it to the restorer. Beuys was not concerned with the fastening elements that survived the fire, instead he conceived the idea that listening closely plays a decisive role in the perception of art. Once made to please the eye, there is little left of Pissarro’s painting, just the idea. The undefined premonition, the quest for inner images, is related to hearing. The burnt stretcher, on the other hand, is also related to the idea that the painting has reached its final destination. Beuys' manifesto from the same year, which was distributed in form of postcards, says: “The fundamental mistake is buying canvas and stretcher.” (Quote from: Klaus Staeck (ed.), Joseph Beuys. Mit dummen Fragen fängt jede Revolution an, Göttingen 1996, p. 97, no. 92).
More Information
+
Sell
Get a free appraisal for a similar object!
+
Register for
Joseph Beuys
+
Buying from A-Z
+
Contact a specialist
+
Joseph Beuys Biography
Share