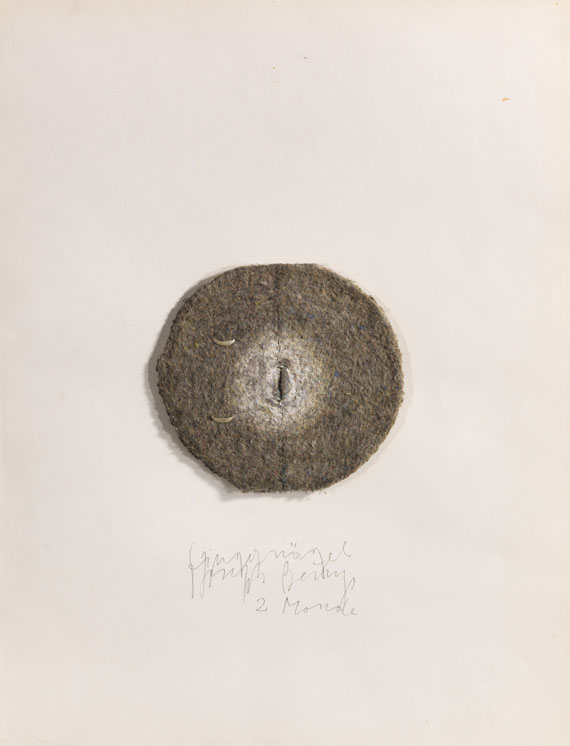 • Felt and fat are key materials in Beuys' creation.
• Sublime usage of the material with a refernece to nature.
• By referencing and reinterpreting triviality, Beuys breaks habitual limits.

"People don't think insofar as to say: Well, if he uses felt, may he not thus perhaps evoke a colorful world inside of us?." (J.Beuys in: Schellmann / Klüser, Multiples, Munich 1980, p. 17)

Finger- or toenails appear in several works by Beuys as an organic legacy of the own existence. They are relics of current events and, as a renewable substance, an expressions of metaphysical ideas. The allusion to the "waxing and waning" moon, as mentioned in the title, is shown in the crescent-shaped fingernails. The moon, as a “cold” planet, rests on a circular, insulating felt pad, which has a white opening at its center reminiscent of a vulva. It is possibly a subtle allusion to the famous painting "L'Origine du monde" (The Origin of the World) by Gustave Courbet from 1866. The phonetic wordplay "two (deux) moons" and "du monde" could also refer to the painting. A drawing from 1958 from the Speck Collection shows a reclined woman in same position as in Courbet‘s work. (Cf. "Jungfrau" from 1952 in the Speck Collection).
A similar work with two toenails on felt is part of collection of Caroline Tisdall, which was compiled by Beuys. It is reproduced in the catalog of his 1979 retrospective in New York. [Eugen Blume]
More Information
+
Sell
Get a free appraisal for a similar object!
+
Register for
Joseph Beuys
+
Buying from A-Z
+
Contact a specialist
+
Joseph Beuys Biography
Share