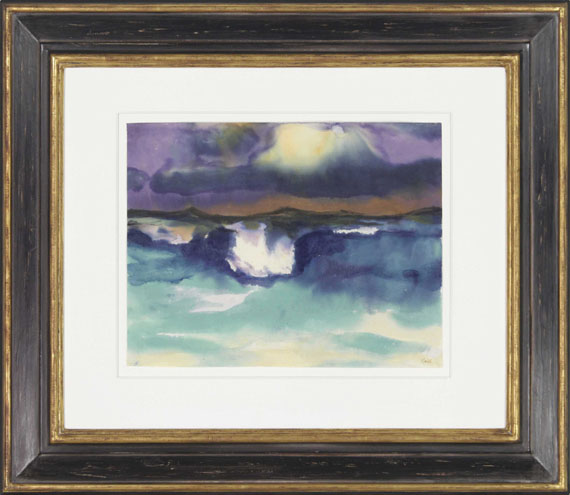 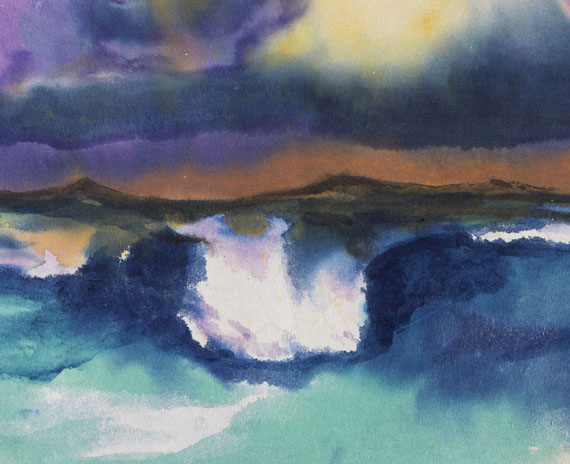 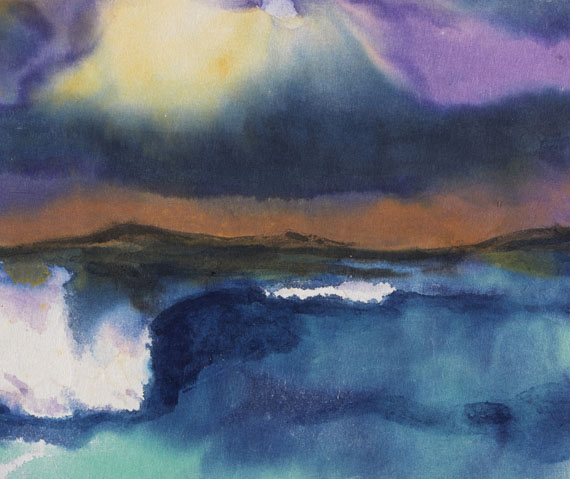 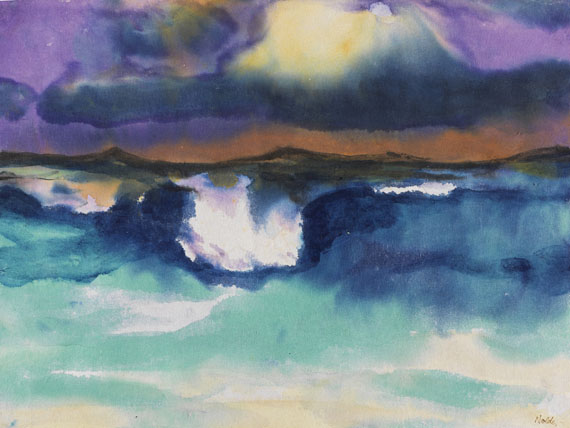 • There is no other theme in which Nolde came closer to abstraction than it is the case with his sea motifs.
• Up until his death the sea remained one of this preferred motifs.
• Sea and sky merge to form a dramatic and expressive color carpet.

Accompanied by a photo expertise issued by Prof. Dr. Manfred Reuther, then head of Foundation Seebüll Ada and Emil Nolde, issued May 25, 2008 (in copy).

"It was as if the fresh air, its salty taste and the thundering waves made me instantly happy. The wind was rejuvenating and the hike on firm sand along the coast was a pure pleasure for me. I opened up like a blossom towards the sun, my senses so sharpened to take in every sound and even the smallest source of inspiration for my art."
Emil Nolde, Reisen, Ächtung, Befreiung (1919-1946), 1978, p. 102.

The watercolor is part of a series of seascape watercolors created on the island of Sylt in summer and late autumn. It stands in the tradition of the series of autumn seascapes that Nolde painted on Alsen in 1910 and 1911. Since then more works on this subject followed almost every year. But it was not until 1920 that he began to make watercolors with marine motifs. The close emotional connection to the sea is probably common to all northerners and manifests itself as a deeply anchored motif in the artist's oeuvre. "Nolde painted the sea as an elementary being, as an apotheosis of light and infinity. [.] The complete immersion into the elemental force of nature, nearly reaching a perilous limit of the feasible, merging with the aim of fully exploring, capturing the things and being captured by, to then paint the picture from memory, far from the surface world, only following the power of imagination and the sensual lure of colors - no other subject suited the painter more. This way he could give tremendous freedom to the flow of colors, while confidently directing it into a compositional order at the same time. " (Quote from: Martin Urban, Emil Nolde. Landschaften. Aquarelle und Zeichnungen, Cologne 2002, p. 32). Almost all of Nolde's depictions of the sea show the view of a rough sea under an impressively arching sky. The artist depicts only a section of water and sky, descriptive details are dispensed with, and a strip of the coast can rarely be seen. These compositions, which show spectacular visions of windy, stormy skies and dramatically turbulent seas, focus on the artist's subjective experience with the elements and do without any identifiable geographic detail in favor of a sensual, expressive rendition of nature. On the verge of abstraction, color is the all-dominant element. The mere description of the motif is of secondary importance, the experience of nature is a source of inspiration. However, the aim is not a naturalist account, but the emphatically felt mood expressed through color, which has an independent aesthetic value. In no other subject did Nolde come closer to abstraction than in the marine motifs. Sea and sky merge into a furious, expressive color carpet. The sea-green color of the water stands in an exquisitely nuanced contrast to the violet sky, the contours in dark blue and black emphasize the watercolor’s threatening mood. The sea as the mother of all life, threatening and tempting at the same time, is one of Nolde's great themes. He has always won new facets in his interpretations, probably fulfilled by the wish to let its very own element, the fascination of strength and inscrutability, take shape. [SM]
More Information
+
Sell
Get a free appraisal for a similar object!
+
Register for
Emil Nolde
+
Buying from A-Z
+
Contact a specialist
+
Emil Nolde Biography
Share