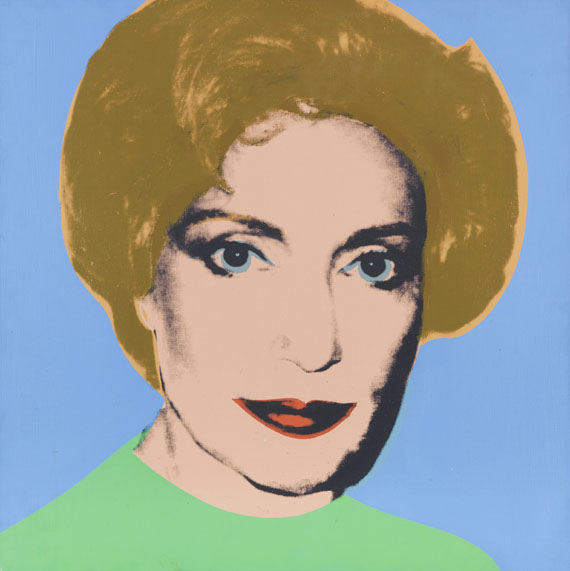 "Pop Art is for everyone."
Andy Warhol in an interview with Gretchen Berg in May 1967, in: exhibition catalogue "Andy Warhol: A Factory", Vienna 1999.

Essay
With his often square format portraits of famous personalities and wealthy members of the American high society, Andy Warhol created works that are absolutely iconic from today's perspective. They do not only correspond to the cultural zeitgeist of their time, but also shaped the aesthetics of American Pop Art with their bright color combinations and facial features reduced to the essentials. Today, due to their unusually high recognition value, they are seen almost as representative of and almost synonymous with Andy Warhol's entire oeuvre. Their similarities in terms of motifs, form and composition are entirely due to the artist’s principles: "You see, I think every painting should be the same size and the same color so [.] nobody thinks they have a better painting or a worse painting. " (Andy Warhol, The Philosophy of Andy Warhol (From A to B and Back Again), New York 1977, p. 149). Before the face of each person is captured on canvas in polymer and screen printing ink, photos were shot in Warhol's New York studio "The Factory". In the case of Maria "Doda" Voridis-Goulandris, the artist took around a dozen Polaroids, of which most and still preserved (collection of the Berkeley Art Museum and Pacific Film Archive, UC Berkeley). The artist then selected one or two pictures based on certain criteria, including pose, color and image effect, which he then enlarged with the help of a projector, retracing the image on transparent film and filling in with color. In doing so Warhol - like a two-dimensional cosmetic surgeon – also changed sitter’s appearance. Noses were shortened, wrinkles were smoothed, the complexion became more harmonious, the collar was changed and the age concealed. In a complex process, the retraced photograph is then reworked into a print template and finally transformed into an almost perfect painting. At a time when portrait painting was regarded a dying genre in contemporary art, Warhol used his great commercial skills to create innovative and novel portraits of famous and less famous people, which prompted the art historian Robert Rosenblum to give Warhol the title of "court painter of the 1970s". In the case of Maria "Doda" Voridis-Goulandris, the first wife of the Greek-born New York shipowner and art collector George A. Embiricos, Warhol even realized at least three different Polaroid poses as colorful works on canvas. One of these works was in the collection of her brother Basil Goulandris (died 1994). According to the sources, Mrs. Voridis seems to have been a dazzling personality. She lived with her husband and their two sons in, among others, Athens, London and Gstaad, among others. Throughout her life, she has supported numerous international and regional cultural and charitable organizations. After her death in 2015, her sons put some of her most beautiful pieces of clothing (including those by Oscar de la Renta, Yves Saint Laurent, Carolina Herrera and others) up for auction for the benefit of the Greek aid organization "Hellenic Society for Disabled Children (ELEPAP)". A photo published at that time shows Mrs. Voridis with a fur stole in a flowery-baroque living room next to a small sideboard with several Fabergé eggs. During their lifetime, the wealthy Voridis were well-known members of New York’s high society. Because of her fame, Doda Voridis would certainly have agreed with Andy Warhol when he explained: "There is one reason why it is worthwhile to be famous; namely, when you read the stories in the big magazines, you know everyone. Page after page, they only talk about people you've met before. I love this kind of reading a lot, and that's really the best reason to be famous. " (Andy Warhol, quote from: ex. cat. Andy Warhol. Bilder 1961 bis 1981, Kestner-Gesellschaft, Hanover 1981, p. 33). [CH]
More Information
+
Sell
Would you like to sell a similar object?
+
Register for
Andy Warhol
+
Buying from A-Z
+
Contact a specialist
+
Andy Warhol Biography
Share 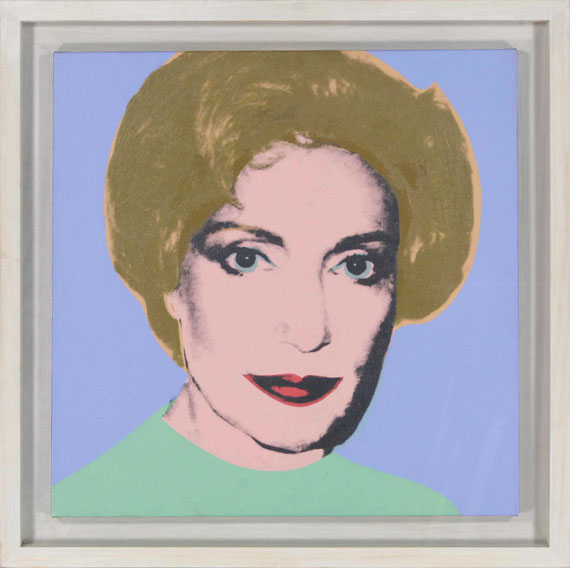