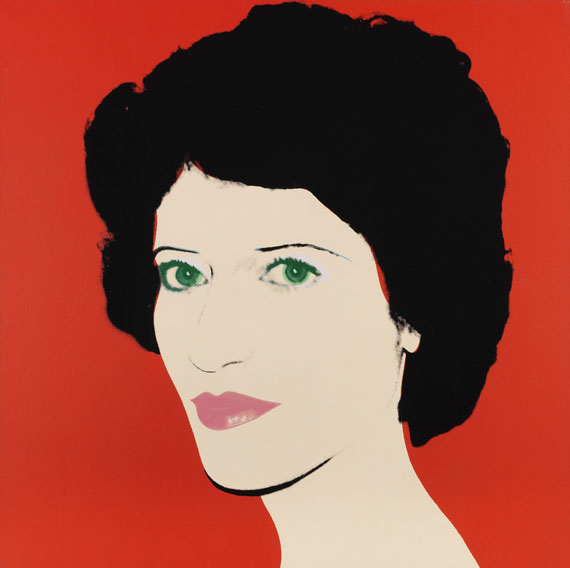 “Everyone was a star, not only for fifteen minutes, but, in this incarnation caught permanently on canvas, ‘forever’.”
Henry Geldzahler, in: Andy Warhol: Virginal Voyeur. Ex. cat. Andy Warhol: Portraits. Museum of Contemporary Art Sydney, 1933, p. 26.
"Pop Art is for everyone."
Andy Warhol in an interview with Gretchen Berg in May 1967, quote from: ex. cat. Andy Warhol: A Factory, Vienna 1999, no p.

"When a person is the beauty of their day, and their looks are really in style, and then the times change and tastes change, and ten years go by, and if they keep exactly their same look and don't change anything and if they take care of themselves, they'll still be a beauty." Although Andy Warhol makes a statement on the beauty of real people, his claim also applies to the painting offered here. The beauty of those captured on the canvas seems unaltered even after almost 40 years, and despite changes in fashion and zeitgeist. Like Snow White, the unknown sitter, whom Warhol portrayed in the early 1980s, confronts contemporary tastes with timeless elegance and an almost majestic, self-confident demeanor. Her perfect complexion and hairdo, the candy-colored lips and the slender, graceful neck can be explained by Warhol's obsession with youthful beauty and an ideal of attractiveness, which he not only desired himself, but to which he also made the people he depicted subject. After a photo shooting in his studio, Warhol transfers the image of the respective model onto transparent film with the help of a projector, in order to initially change the portraits to meet the concept of ideal beauty. In a next step the photograph is converted into a print template in an elaborate process and finally transformed into an almost perfect painting. Through the Warhol Foundation the portrait offered here arrived at the Dorothy Blau Gallery in Florida at around the turn of the millennium, where it was for the first time presented to the public in the exhibition "Andy Warhol: Pretty Women". The gallery and its founder Dorothy Berenson Blau (1917-2014) have long been among the pioneers of the Miami art scene and played a considerable role in Warhol's artistic and commercial success in the 1980s through the rediscovery of his art. Dorothy Berenson Blau always has and always will be the only woman of which Warhol made two of his famous cult portraits - in two different periods in her life. Dorothy Berenson Blau regards Warhol as the most important artist of the time and says about her own experience with the artist: "He made each of his sitters feel famous for those infamous '15 minutes'. As his old Polaroid camera kept snapping and flashing, you felt beautiful and glamorous - one of Andy's 'pretty women'. Still critics said he was a 'has been'. Today the person is an icon. Why? Even though he was dismissed during his lifetime for creating art about consumerism, celebrity, and the tabloidization of death, he correctly predicted these major themes of the late 20th century. He did it in his powerful, trademark style that is recognizable from Miami Beach to Berlin." (Dorothy Berenson Blau, quote after: ex. cat. Andy Warhol: Pretty Women, Lococo Mulder, St. Louis/Dorothy Blau Gallery, Bay Harbor Islands/Miami, 2000/2001, preface). [CH]
More Information
+
Sell
Get a free appraisal for a similar object!
+
Register for
Andy Warhol
+
Buying from A-Z
+
Contact a specialist
+
Andy Warhol Biography
Share