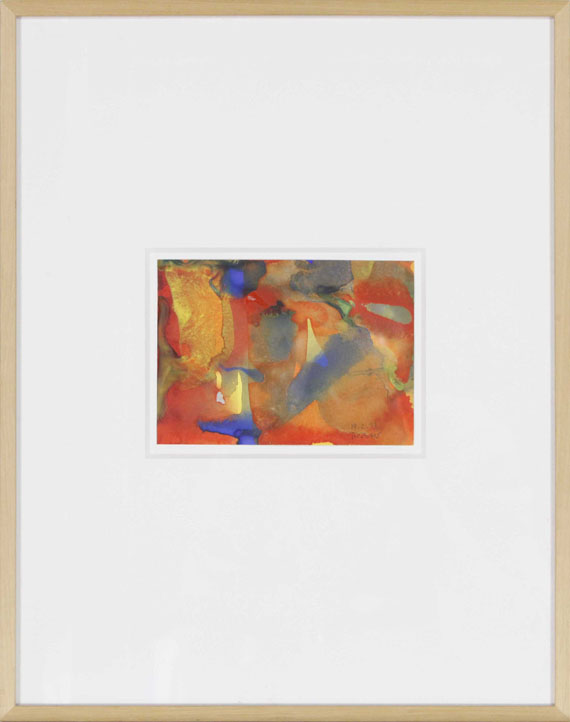 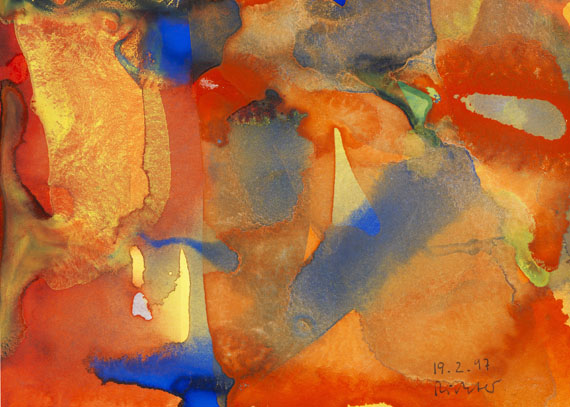 • Watercolors make for a small but important work group in the artist's oeuvre.
• Transparent and opaque color application: Richter fully exhausts the creative potential of the watercolor technique.
• Privately-owned since making.
• Gem with fascinating brilliant colors.

The work is registered in the online catalog raisonné.

Gerhard Richter's impressive oeuvre of works on paper is only known to a small circle of connoisseurs. His first watercolors and drawings, which, like his paintings, were initially based on photographs, were created in 1964. From then on, the works on paper appeared at greater time intervals and mostly systematically in series. A more intensive examination of the watercolor technique began at the end of the 1970s and reached its peak in the 1980s. It was not until 1985 that works of this genre were exhibited at the Staatsgalerie Stuttgart for the first time. At first, Richter’s watercolor art seemed too playful, fearing that the resulting sheets might be too beautiful, too seductive, too "artistic". In general, the medium of watercolor painting played a subordinate role in post-war modern art, and it was not until the 1980s that it became an important means of expression again for various artists such as Beuys, Tuttle, Palermo, Polke, Baselitz, Graubner or Gerhard Richter. The artist appreciates the work process that only the watercolor allows - pouring, dripping, applying paint - because the result cannot be precisely planned. This creates a "nonchalance" (G. Richter, in: Dieter Schwarz, Gerhard Richter: Zeichnungen 1964-1999, Düsseldorf 1999, p. 7.), which is difficult to realize in oil paintings and which is particularly important to Richter, because it allows the artist to take a back seat while material and color come to the fore. The serial work method and the principle of chance are both key components in Richter's artistic work, which is also true for the watercolors. He developed the small-format luminous works in short and intensive work phases. The watercolors usually have a date that replaces the title. They also provide information about the artist's method, almost every day he created a new work. What they have in common with the large paintings of the "Abstrakte Bilder" is a work process in layers. Transparent streaks of color are broken up by more strongly pigmented areas of color that shine from the depths. Initially, red, yellow and blue tones dominate. "With the restriction to primary colors, I avoid having to mix a certain tone first, because it would then be less neutral, but maybe extravagant or tasteful or just the way it always is. That‘s why it is better to start with red, blue and yellow as they will mix anyway. " Gerhard Richter, quote after: Gerhard Richter, Texte 1971 bis 2007, published by Dieter Schwarz, Cologne 1999, p. 352). His compositions benefit from the translucent quality of the watercolor technique while Richter avoids a wet-in-wet effect. In several work steps, for which short drying phases have to be planned over and over again, superimposed color networks are created. But the watercolor technique also shows the artist its limits; the paper, unlike canvas, is not able to take on numerous layers. Much sooner than it is the case with paintings he has to find the point of completion. After a labor-intensive phase in February 1997, during which the present work was also created, Gerhard Richter completed his last watercolor on March 12, 1997. [SM]
More Information
+
Sell
Get a free appraisal for a similar object!
+
Register for
Gerhard Richter
+
Buying from A-Z
+
Contact a specialist
+
Gerhard Richter Biography
Share