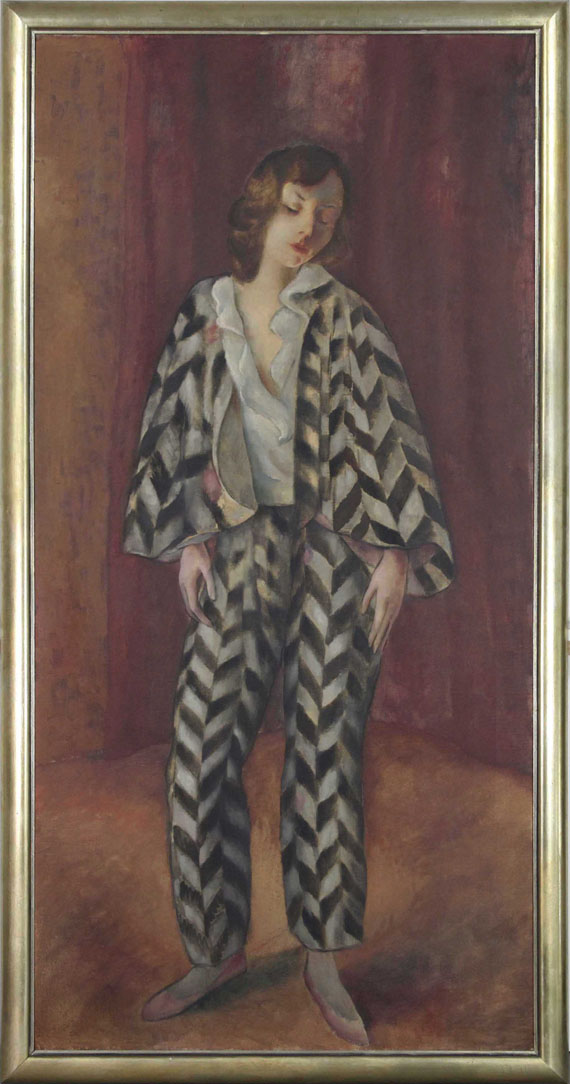 • Subtle, sensitive portrait of the well-known variety dancer.
• Large-format, full-length portraits are rare in the artist's work.
• Motif inspired by famous artists like Paul Cézanne and Pablo Picasso.
• In addition to numerous religious motifs in Eberz's work, a few paintings from the world of cabaret, dance and circus were created around 1920.

We are grateful to Mr. Franz Josef Hamm, Limburg/Lahn, for his kind expert advice.

Josef Eberz met the dancer from Vienna, who had already performed in numerous shows all over Germany in Munich in the 1920s, where she appeared in different roles with the "Münchner Tanzgruppe" - Eberz portrayed her again as a melancholicballet dancer in a white tutu in 1925 (Deutsche Kunst und Dekoration, vol. 57, 1925, p. 28). A slight melancholy and introspection also surrounds her in the earlier portrait in a harlequin costume, which, forits black and white pattern is more reminiscent of the more poetic counter-figure Pierrot from French theater. Famous artistslikePaul Cézanne and Pablo Picasso were fascinated bythe world of jugglers and comedians, who - like in many cases the artists themselves - led an existence beyond bourgeois norms and ideas. The closed eyes and the gently tilted head give the graceful dancer the expression of remoteness and leave the viewer puzzled as to which inner melody she is listening to. In a reduced palette, Eberz stages the figure wrapped in a wide robe, which, despite its standing pose, is in elegant, barely noticeable movement. The rigidity of the graphic pattern of her costume contrasts with its soft, flowing forms and the curved lines of the white blouse. The harmonious reduction of the colors and the withdrawn pose also give the painting its fine subtlety and sensitive psychological expression. [KT]
More Information
+
Sell
Get a free appraisal for a similar object!
+
Register for
Josef Eberz
+
Buying from A-Z
+
Contact a specialist
Share