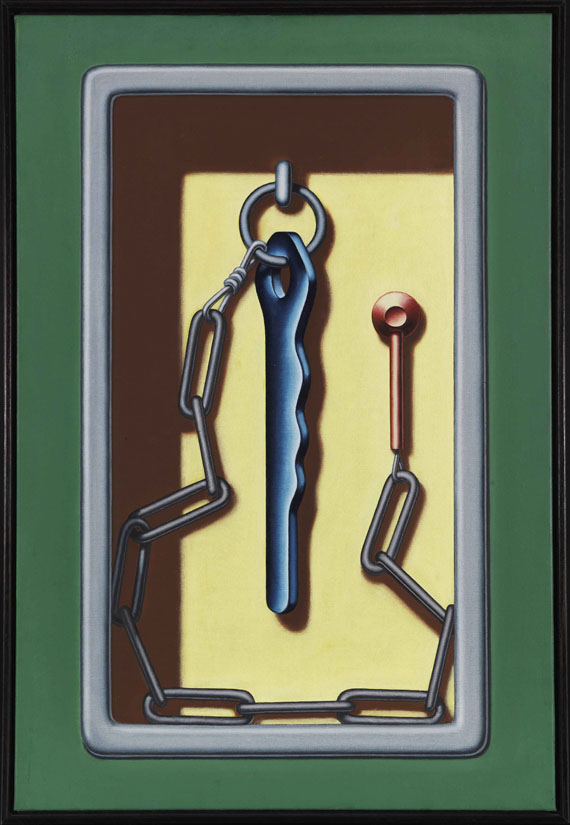 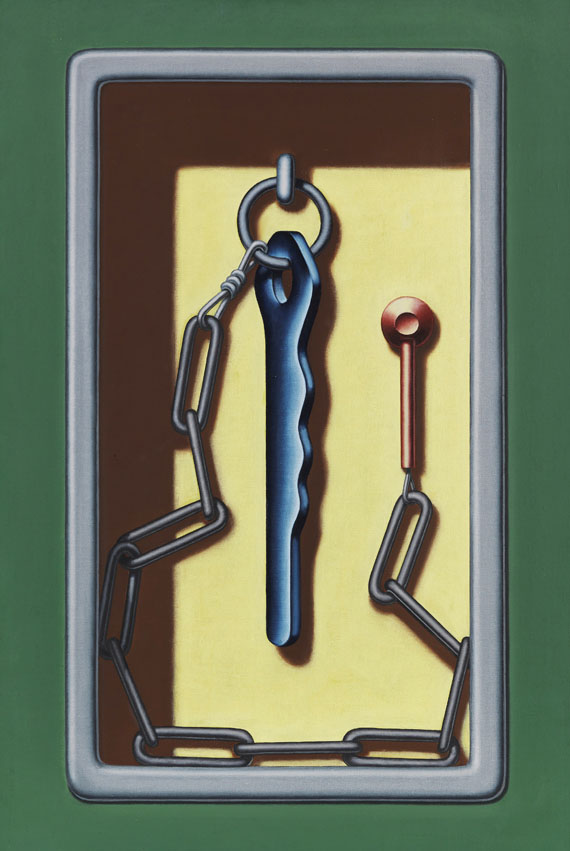 • Klapheck is considered inventor and master of the machine picture in which he reflects on human existence.
• With his vexing imagery Klapheck anticipated elements of both Photorealism and Pop-Art.
• Excellent example of Klapheck's occupation with existential pictorial contents which he expresses through small everyday objects in contorted proportions and surreal combinations.
• "Bekenntnis" (1989), a very similar work, is part of the collection of the Hamburg Kunsthalle.

LITERATURE: Arturo Schwartz, Konrad Klapheck, Milan 2002, p. 160, with illu.
"The difference between the Photo-Realists [.] and him [Klapheck] lies in the decided alteration between object and image, the high degree of abstraction his objects have, their detachment from a natural setting and thus - despite everything else - their distance from reality, their fetish character and emblematic stylzation."
Werner Schmalenbach, 1976, quote from: Konrad Klapheck. Objekte zwischen Fetisch und Libido, Basel, Galerie Beyeler 1976, no p.

Konrad Klapheck is the inventor and undisputed master of the machine image. In 1955 he created his first typewriter painting and thus found the decisive starting point for his further work, which henceforth focuses on sewing machines, irons, kettles, telephones and other everyday items. The focus on the everyday object, which is alienated by monumentalization, detail, isolation and new combinations, is not only Klapheck's artistic life theme, but also his art-historical unique selling point. His unique imagery is remembered, it is both vexing and fascinating at the same time. With his real-surreal imagery Klapheck in a way both anticipated and went beyond the painting of photorealism and pop art. It is this particular sharpness of detail and objectivity of the presentation in combination with alienating elements and often human-emotionalizing picture titles that let the viewer's perception oscillate between closeness and distance. For Klapheck, the focus is never on the object alone, but always on the person represented by it: "[..] I [have] been asked: 'Well, you have such adorable children, don't you want to paint them? And why do you exclude people? ' And back then I always thought: But people are at the center of my work, they are the topic! But I use the instruments that people use. Since the Stone Age, people have created self-portraits, from the first stone wedge to today‘s computers. " (K. Klapheck, 2002, quote from: Klapheck. Bilder und Texte, Munich 2013, p. 114). Nothing has escaped Klapheck's dissecting look at his everyday environment, and so in his later works he increasingly devoted himself to the little protagonists of everyday life, such as cables, chains, plugs and keys. "Der verhinderte Apostel" (The would-be Apostle) is a particularly beautiful example of this focus on only seemingly marginal matters. Based on the household appliances of the 1950s and 60s, which were mostly associated with women and mothers, memories of his own youth and that of his children can be found in the form of bicycles, motorcycles and roller skates in later works. Finally, beliefs and ideas of the afterlife became themes of Klapheck's work. After his wife died in a fire, Klapheck, who is of Jewish faith, painted a red typewriter with Hebrew letters in 1988 and named it "Schmerz" (Pain). Works with the titles "Das Opfer“ (The Victim), "Bekenntnis" (Confession, 1989, Hamburger Kunsthalle), "Angst" and "Fate" (Fear and Fate ) followed. Klapheck was only in his late fifties when he painted "Der verhinderte Apostel", which shows a chained and therefore useless key in the key box, the title of which identifies Klapheck as the key to the kingdom of heaven. [JS]
More Information
+
Sell
Get a free appraisal for a similar object!
+
Register for
Konrad Klapheck
+
Buying from A-Z
+
Contact a specialist
+
Konrad Klapheck Biography
Share