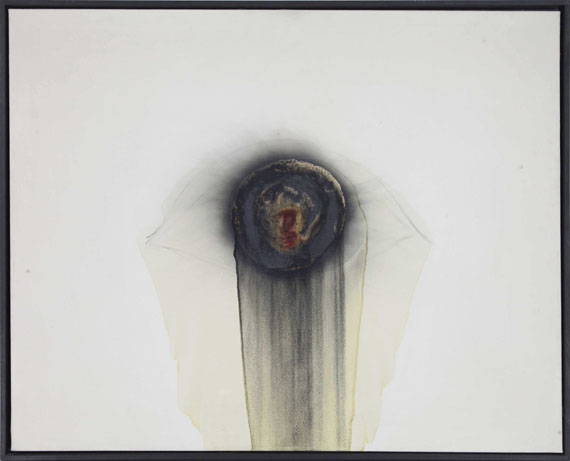 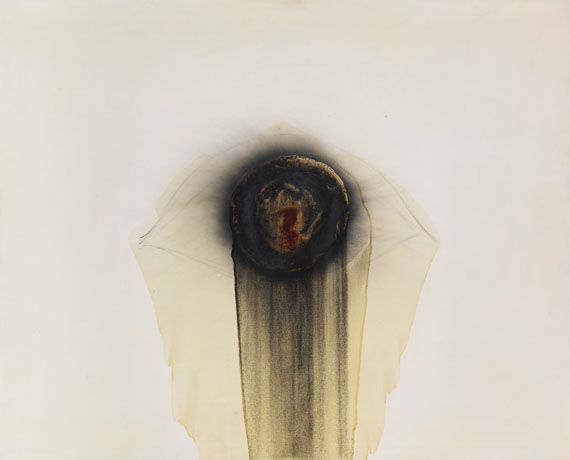 • This is the first time that the work is offered on the international auction market.
• From the important "ZERO" era.
• By 1965 "ZERO" had become an internationally acclaimed art movement.
• For the"ZERO" movement the eye was of symbolic significance as it is the most important sensory organ for the perception of light.

"For the creation of the smoke pictures the eye is far more important than the hand [.]. I hope to attain a silent space through minimal physical effort and far from any sort of drama. A space that becomes so strongly perceptible that it invites you to stay." (Otto Piene, quote after: Mack, Piene, Uecker, ex. cat. Kestner-Gesellschaft Hanover, 1965, pp. 107 and 110).

Along with Heinz Mack, Otto Piene is the founder of the "ZERO" group and one of the first artists to use the element of fire as a means of design. After months of searching for a name, "ZERO" became the official denomination for a movement that wanted to give art in post-war Germany a new direction. The artists equate the situation with the countdown of a rocket launch - "Zero", the moment when an old state changes into a new, unknown one. Günther Uecker joined in 1961, together with Mack and Piene they formed the "inner circle" of the "ZERO" group. In 1965 - the year in which the work "Auge" was created - "ZERO" had already become an international movement. While Uecker and Mack dealt with the effect of light itself, Piene tried to explore darkness on another level by adding smoke and fire to the painting. From the beginning of the 1960s Piene experimented with fire, smoke and light, directing their interaction towards a common goal. Intention and will, as well as arbitrariness, but also the independence of the material, enter into a balancing synthesis. It is remarkable that each his work groups are based on one another. First he created the raster pictures for which Piene applied the paint through a raster, creating a relief of dots that visually sets the surface of the canvas in motion. The first smoke drawings evolved from the raster pictures in 1959: "I came up with the technique of smoke drawings when I saw candle soot oozing through raster foil and settling on the edges." (Otto Piene, quote from: Otto Piene. Zero: Werke von 1957-1966, ex. cat. Galerie Koch, Hanover, April 27-25, 2013, p. 18). With the help of the stencils of the raster images, he directed smoke onto the image carrier and thus attained the typical vibrating motion of the serial raster points. He soon transferred this technique to the screen. The work "Auge" from 1965 is a document from the period of transition from the smoke pictures to the fire pictures. The soot is bound to the canvas with a fixative. This inflammable material causes the color pigments to gel and form the typical crusty surface that is distinctive for Piene's artistic signature. The runny fixative and the melting color form streaks that create these special, fascinating amorphous structures. The eye motif can be found in Otto Piene's work from 1963 onward. He described the eye as the "most perfect lens in the world" and honors it with a permanent place in his work. For the "ZERO" movement the eye is symbolic: "If the eye weren't sun-like, / How could we see the light" (Johann Wolfgang Goethe, Farbenlehre, Gerhard Ott and Heinrich Proskauer, vol. 1, p. 57). The most important sensory organ for the perception of light stimuli is the eye, and light is the decisive transmitter from person to image to person. A nice metaphor: Fire as a natural force, its power and light creating iris, without which it would not be visible. A mystically subtle composition emerges from the actually destructive elemental force of fire, from which Piene wrests an unbelievable creative energy and thus becomes a master tamer of this element. [SM]
More Information
+
Sell
Get a free appraisal for a similar object!
+
Register for
Otto Piene
+
Buying from A-Z
+
Contact a specialist
+
Otto Piene Biography
Share