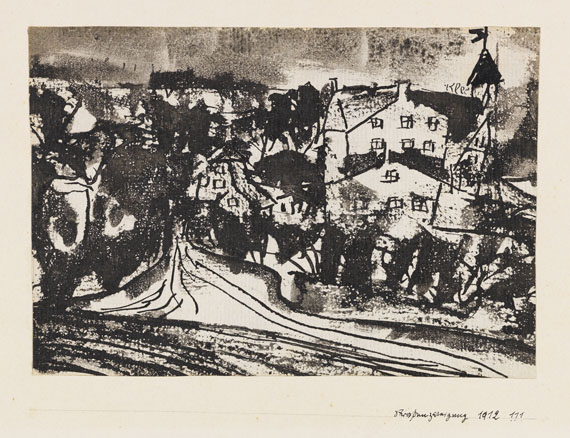 • On the auction market for the first time in fourty years (source: artprice.com).
• Klee experiments with diverse shades of lightness and darkness.
• This ouevre was shown in Cologne the very year it was created.

The city sprawls out in front of the beholder's eyes. A tower holding a waving flag, several houses, dense vegetation and a street crossing depicted in the foreground characterize the picture. The ouevre of Swiss painter and graphic artist Paul Klee (1879-1940) captivates the viewer through its rich detail, playful formal language and exploration of lightness and shadow, brightness and darkness. Klee uses black tempera and pen to reproduce nature's diverse tonalities, either by superimposing it or applying it at a slight distance. As early as 1908, Klee wrote about how he applied different levels of brightness onto paper: "In addition to focusing on a constructive image design, I studied the tonality of nature by adding layers of diluted, black watercolor paint together. Each layer must dry out well. In this way, a mathematical light/dark proportion is achieved." (Quote from: Boris Friedewald: Paul Klee. Sein Leben. Seine Kunst, p. 57). This drawing is a remarkable example of his exploration of light, especially around the sky and along the right edge of the motif.
Another "Straßenzweigung" (fig. 1) came into existence this same year, which resembles more of a sketch and in comparison to this oeuvre, does not show the interplay of different tonalities. Over the following years, Paul Klee remained fascinated in the potential of a reduced color palette, and more black-and-white drawings similar to the two aforementioned were created. Klee's trip to Tunisia alongside his painter friends Louis Moilliet and August Macke in April 1914, a mere two years later, fueled Klee's transition away from the withdrawal of color, making way for an explosion of color. Numerous watercolors and oil paintings painted during and after his time in Tunisia attest to the discovery of color (fig. 2). In order to hereby capture the southern landscape's tonalities, Klee worked with color gradations instead of working purely linearly. The use of tonal graduations is therefore a constant in Klee's oeuvre, connecting the works in black and white with those executed in color. However, even more so than Paul Klee's artworks in color, the ones in black and white truly represent his great talent: despite limited means, he is able to create an extraordinary, atmospherical visual effect. That is precisely why our work is such a highlight.
The 1910s brought about defining changes for Klee, not only in terms of his painting, but also personally, as the artist began to receive art market recognition. Klee's first solo exhibition was held in Bern, Switzerland, between the months of August and September of 1910. Subsequently, a retrospective of around 56 artworks was exhibited at the Kunsthaus Zürich, as well as in Winterthur and Basel. First acquisitions by important art collectors were made, including by the Bern-based building contractor Alfred Bürgi. After her husband's death, his widow Hanni Bürgi compiled one of the most important and extensive private collections of Klee's ouevre. The artist, who was living in Munich at that time, also came into contact with the artists' group ‘Blauer Reiter‘. 'Blauer Reiter' called for a new, revolutionary use of color and form, that liberated itself from the academic constraints of depicting figurative realities. Additionally, in 1911, Klee visited the works of Henri Matisse (1869-1954) at an exhibition in Munich. Given his playful dimension, as well as his free conception of color and form, Klee's artistic output must have been influenced and stregnthened by both the discovery of Matisse's artworks and his encounter with members of the ‘Blauer Reiter‘.
More Information
+
Sell
Get a free appraisal for a similar object!
+
Register for
Paul Klee
+
Buying from A-Z
+
Contact a specialist
+
Paul Klee Biography
Share