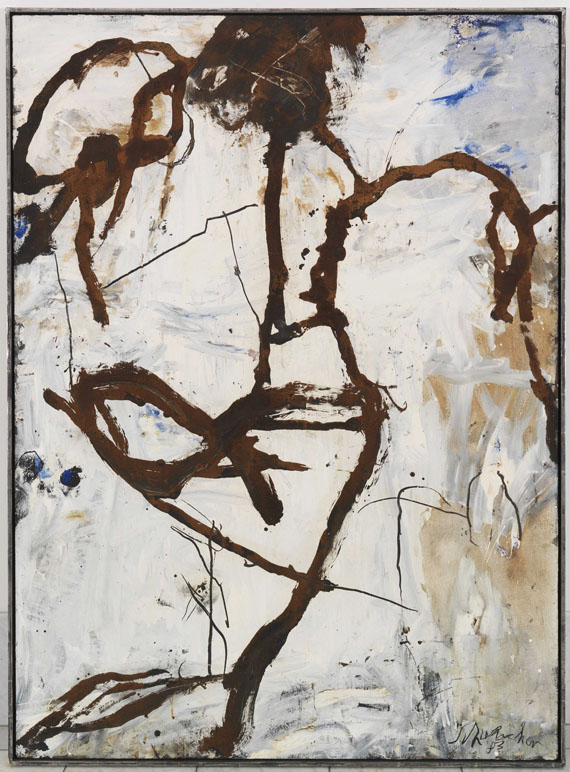 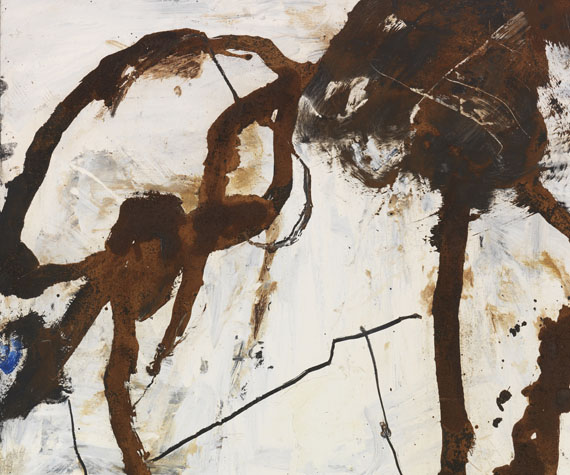 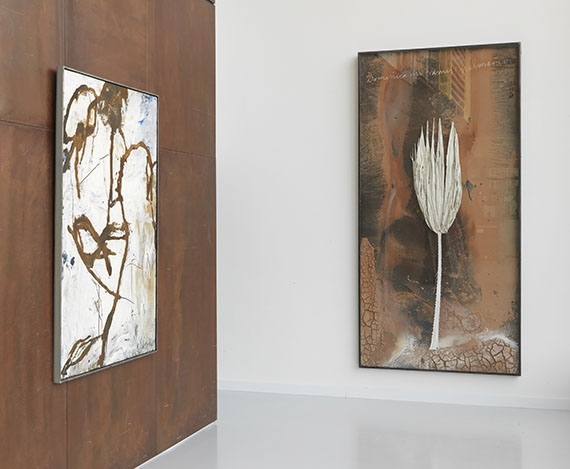 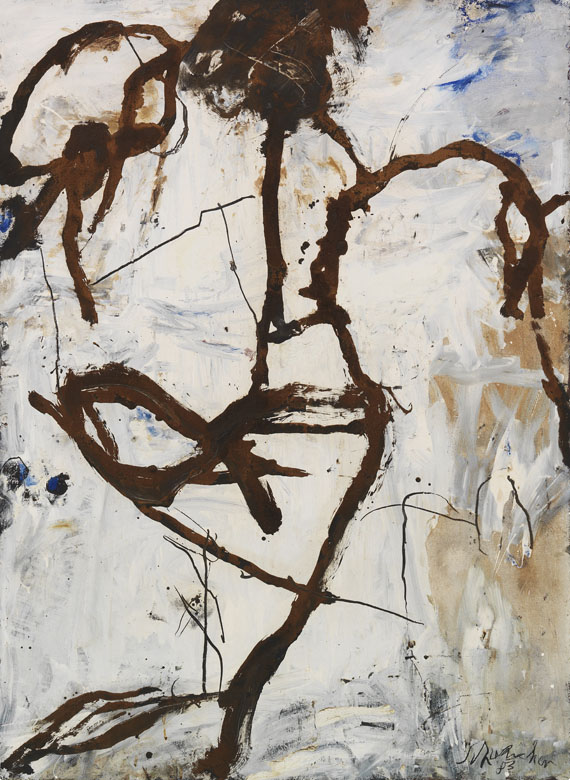 • The rhythmic dynamics of motif and painting process make this work a fascinating example of Schumacher‘s Action-Painting.
• Schumacher declares Northern African colors and the dynamic motions of African dance as protagonists of his vivid and brilliant color chord.
• The large-size painting was on display in a Schumacher exhibition at Osthaus Museum, Hagen in 1987.

LITERATURE: Cf. Nolde/Schumacher. Verwandte Seelen, ex. cat. , Osthaus Museum, Hagen, October 23, 2010 - January 23, 2011, pp. 96-115.
"All of Schumacher's pictures are unique in a certain sense. They are neither based on sketches or preliminary drawings. Nothing is planned or even programmed. The beginning of all works is marked by a general, non-determined and open concept."
Karl Ruhberg, E.Schumacher. Zeichen und Farbe, Cologne 1987, p. 27.

Schumacher, who made first steps in gestural anstraction in the early 1950s and soon found his unmistakable style, became one of the most important protagonists of German post-war abstraction. His creations are impulsive and colorful, and fascinate today’s observer with their enormous plasticity of the color. Color as matter is at the center of Schumacher's action painting, who succeeds in making the haptic presence on the canvas tangible in a fascinating way: "For the action painter, restlessness is the artist's first duty. [.] Informal painting always has a tendency to explore the third dimension [.] Schumacher saw the latent object character of his pictures and consequently made the attempt to turn their inner form inside outoutside[.] As he said, Schumacher wanted to focus on the image center, simply leave out the 'negligible of the backgrounds', making the material the motif of the picture’s conception more rigorously than ever before and to emphasize the tactile appeal of the humps and hollows, nets and craters." (Karl Ruhrberg, Emil Schumacher. Zeichen und Farber, Cologne 1987, p. 22). Schumacher received the Guggenheim Award for his work and participated in the Venice Biennial as early as in 1958. A year later he showed several works at documenta II. Schumacher traveled to Libya and Tunisia for the first time in 1962 and to the island of Djerba in 1969. The oriental impressions he gained there gave his work, which he had so far primarily kept in muted colors, new impulses. The creation of our large-format composition, which is carried by the impulsive, black structure of lines on gestural white over bright blue, was directly preceded by two trips the artist made to North Africa. It is the colors of the Orient that Schumacher declares to be the protagonists of our dynamic composition. In "Helimba", Schumacher captured the clear blue of the sky, the ocher of the sand and the extreme glow of the white in sunlight in a large-format action painting. Even the dark line structure, reminiscent of a figure in the broadest sense, which extends into the pictorial space with an almost dancing moment of movement, had its conceptual origin in the abundance of new impressions gained in North Africa. The enormous freedom and eccentricity of African dance must have been particularly inspiring for the action painter Schumacher, perhaps even more so than for expressionists like Emil Nolde. Accordingly, "Helimba" is an impressive document of the unity of the dynamics of dance motifs and the likewise dynamic act of painting. Schumacher, one of the most important representatives of European Informalism, is an action artist who worked with eccentric gestures in front of or above the canvas stretched out on the floor. Most recently, the exhibition "Le Grand Geste! Informel und Abstrakter Expressionismus 1946-1964" (2010) at Museum Kunst Palast, Düsseldorf, honored Schumacher's work in the context of American Action Painting. [JS]
More Information
+
Sell
Get a free appraisal for a similar object!
+
Register for
Emil Schumacher
+
Buying from A-Z
+
Contact a specialist
+
Emil Schumacher Biography
Share