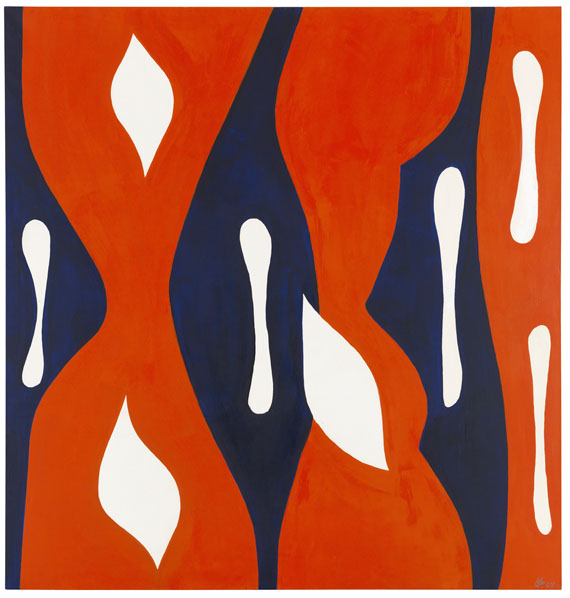 "Pictures come from pictures", says Ernst Wilhelm Nay! Following this dictum throughout his long life as a painter, the artist made another change, this time the last stylistic change in his pictures. While the ‘Eye Pictures‘ were still full of spatial elements, expressiveness and representational associations, Nay's 'last' pictures, on the other hand, appear simple and complex at the same time. “At the height of his artistic career Nay subjects his painting to a final clarification”, says Elisabeth Nay-Scheibler in 1990. “It leads to a radical simplification of his formal language and a reduction of his palette to just a few colors. With vitality and the utmost discipline, he dares to give up the expressive structures of the 'Eye Pictures' that had been taken to painterly perfection. He gains the freedom to realize the essentials of his art through reduction in his new vision. Clearly delimited spindle shapes, chains of round or oval discs, arches and ribbons now spread vertically across the picture‘s surface. The vertical emphasis creates the impression of a seemingly unlimited, transitory sequence of movements. The pictures suddenly gain a meditative calm.” (Nay-Scheibler in: E.W.N., Catalog raisonné of oil paintings, Volume II, 1952-1968, Cologne 1990, p. 282). Instead of spatial elements of fully executed expressiveness, we find vegetal and anthropomorphic forms, spindle forms, chains, oval discs, colored ribbons and arches, which Nay realizes in accordance with his theoretical approach to chromatic painting: “The surface can be raised to shape through color .“ Nay developed a new palette towards cool, mixed colors in at times bold combinations, such as it is the case with this work in which the two-dimensional, dominant red covers the canvas, surrounding deep blue and bright white floating islands. Deeper associations with the imagery of human vessels are borne by illusionist abstractions. A characteristic feature of the late, mostly strictly squared pictures is the way the composition is conceived beyond the edge of the picture into the wide space of our existence, as if it were an expansive and dynamic, never-ending equation of an ornament. “A colorist is a painter who thinks through color and attains perception through color,” said Nay in his last published essay “Meine Farben” in 1967. “Cool color accords set in sovereign simplicity determine the later pictures. The color white assumes a special function, which is no longer applied with a brush, but is created by leaving blank spots on the white canvas. This way Nay integrates the white into the absolute two-dimensionality of the surface. Even strong contrasts from light to dark color appear flat due to the white perforation. The two-dimensionality is of such great importance for Nay as he recognizes a disturbance of its immediacy and sensual radiance in every perspective spatiality of the colors. "(Nay-Scheibler in: EWN, Catalog Raisonné of Oil Paintings, volume II, 1952-1968, Cologne 1990, p. 282). The serial character determined Nay's way of working from day one. Early exmples are the “Dune Pictures” from the 1930s. Because of their extreme stylization, they seem to anticipate the flatness and light-and-dark painting manner of characteristic of his late creative period, according to Siegrid Pfeiffer in her article in Nay‘s “Bilder der 1960er Jahre“ (ex. cat. Schirn Kunsthalle 2009, p. 15.) Nay takes the liberty of realizing the essence of his art through reduction in a new vision of absolute painting. He increased the luminosity and transparency of his color through bold simplification. Interior drawing is entirely sacrificed to a more arithmetic color scheme, every expressiveness that was previously presented so intensely is transformed to a cool, sovereign simplicity, inspired by a meditative calm and order. [MvL]
More Information
+
Sell
Get a free appraisal for a similar object!
+
Register for
Ernst Wilhelm Nay
+
Buying from A-Z
+
Contact a specialist
+
Ernst Wilhelm Nay Biography
Share