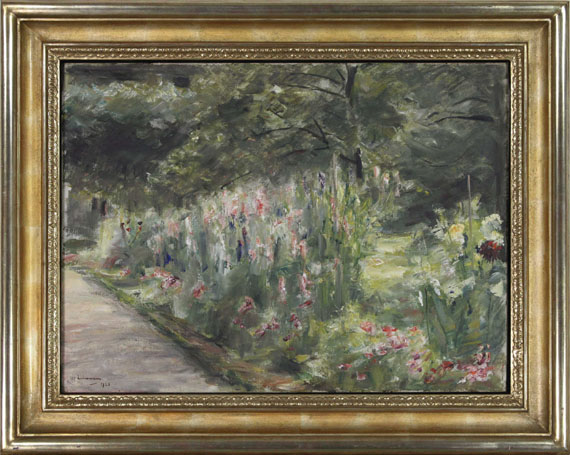 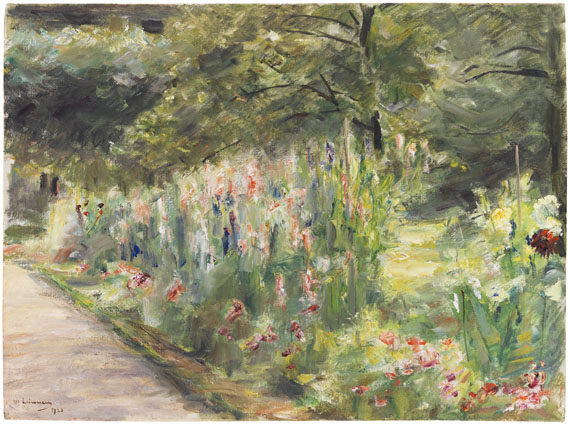 • Views of the garden of his estate in Wannsee from the 1920s are among his most sought-after works on the auction market.
• Part of the Deutsche Bank Collection for 40 years.
• The Wannsee mansion and the garden is Liebermann's most favorite motif - "I could paint a hundred pictures here".

In 1909 Max Liebermann acquired a plot of land on the banks of the Großer Wannsee and commissioned the architect Paul Baumgarten to build a two-storey country house in the middle of the elongated property. He discusses the design of the garden with his friend Alfred Lichtwark, the director of the Kunsthalle Hamburg Kunsthalle. A detailed correspondence between the artist and the art historian gives evidence of the museum man's intensive preoccupation with historical models of garden design, taking into account the needs of the painter and his family. In addition to his house with a studio on Pariser Platz in the middle of Berlin, Goethe's garden house in Weimar is Liebermann's ideal of a rural residence located between Berlin and Potsdam. In front of the house facing the street, across from the small gardener's property, Liebermann had a kitchen garden with high-rising shrubs. With paintings depicting this part of the garden, Liebermann takes up the wild splendor and lavish abundance of flowers and translates them into an almost abstract world of colors and shapes. On the property behind the house facing the water, lawns alternate with hedge gardens and freely planted birch trees. The numerous paintings by Liebermann that were created with the garden as a motif allow for an understanding of the different layouts of the garden, in addition to their colorful beauty, they are also a document of a state that is no longer preserved today in its entirety but has been partially reconstructed. Liebermann painted his garden for more than two decades and from the beginning on they were a new facet of his extensive work in addition to the important circle of portraits. The more the artist became familiar with the structures of the garden, the order between paths and beds and the lushness of the planting, the freer and easier his picturesque view of the place of tranquility far away from the big city of Berlin became. While the initially created “portraits” of the garden landscape still predominantly in Liebermann‘s typical style based on French Impressionism, the artist freed himself more and more from the strict order of the garden in the early 1920s and literally took a look aside, as it is he case here, onto flower beds in front of a thick green wall of bushes, not only changing the perspective, but also changing to an almost Fauvist palette of colors. Broad brush strokes of green in green grow together to form a more or less dense wall in front of which we find lush plant stalks with attached dark red and orange-colored flowers, staggered over a wide bed on the edge of a path. Liebermann takes classic landscape painting with untouched nature is taken to extremes. This free development of nature appears like a liberation from an academic order, which Liebermann as a strict juror of the Berlin Secession has also advocated for years. With the outbreak of World War I the Wannseegarten as a studio became a much appreciated alternative to his home and studio on Pariser Platz, right next to the Brandenburg Gate, diagonally across from the Academy of Fine Arts,which he had presided since 1920. At his residence on Pariser Platz the highly acknowledged artist also welcomed local celebrities, some of which he portrayed. The Wannsee Garden and the multitude of pictures created there are testimony to the artist's path to get closer to the wild growth of nature. With this "portrait" of the flower bushes, he stepped into nature almost without any distance. With the pure painting of these garden pictures, Liebermann made a big step towards the modern art at an old age. [MvL]
More Information
+
Sell
Get a free appraisal for a similar object!
+
Register for
Max Liebermann
+
Buying from A-Z
+
Contact a specialist
+
Max Liebermann Biography
Share