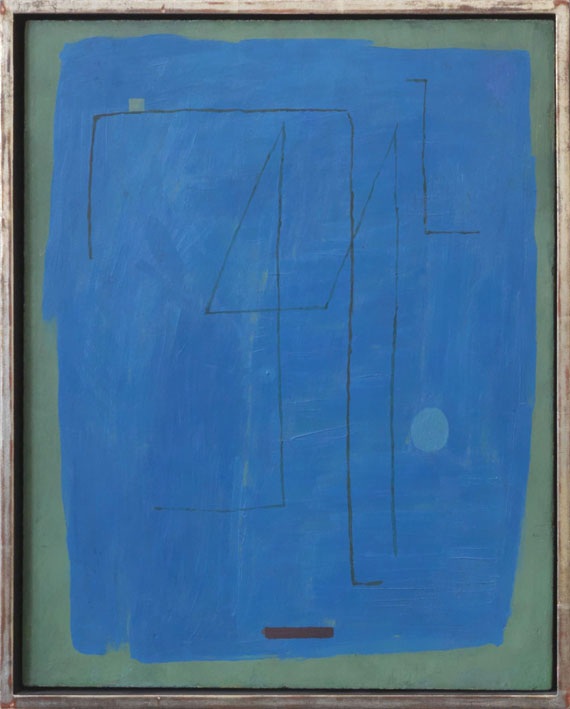 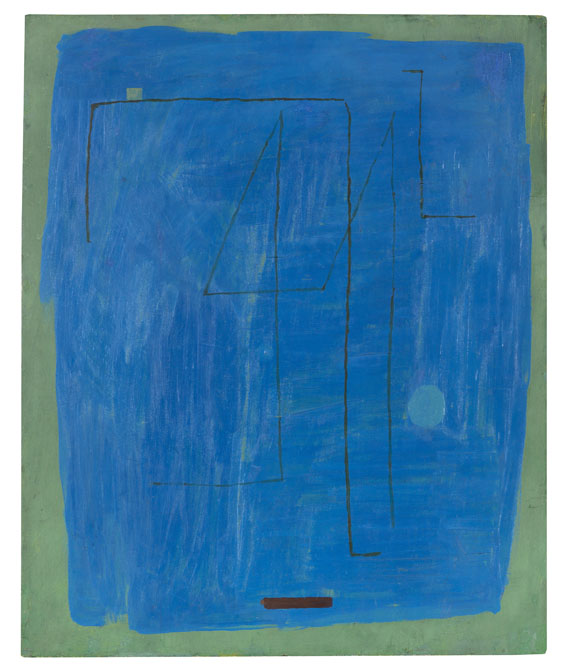 • Earliest abstract painting by the artist on the international auction market (source: www.artprice. com).
• Rare early abstract painting, of seminal significance for Hartung's following gestural-abstract creation.
• In December 2020 the similar composition "T1934-2" from 1934 realized the second highest hammer price ever fetched by a work by Hartung on the international auction market.
• The Metropolitan Museum of Art, New York dedicated a solo show to the European protagonist of abstract painting as early as in 1975.

The painting is registered in the archive of the Fondation Hartung-Bergman, Antibes, and will be included into the forthcoming catalog raisonné.

LITERATURE: Hans Hartung. Spontanes Kalkül, ex. cat. Museum der Bildenden Künste, Leipzig 2007, p. 206 (with illu.).
"In my opinion painting that we call abstract is none of those 'isms' of which we have had so many recently, it's neither a "style" nor an "epoch" in art history, it's just a new form of expression, a different human language - one that is far more direct than previous painting used to be."
Hans Hartung

Hans Hartung is one of the few German artists who, after only a short figurative period, devoted themselves to abstraction throughout almost their entire creation. A lecture by Wassily Kandinsky, which the Leipzig-born artist heard in 1925 while still was a student, became a key experience. From then on, Hartung exclusively worked in abstraction and eventually became one of the most outstanding representatives of European Informalism. Our luminous composition, which Hartung placed in a flat, broad style onto the image surface, already seems to anticipate the broad lines of later compositions by Pierre Soulages. While for other artists the step to abstract painting was often the result of a long search, for Hartung it was more like an early basis of a particularly rich gestural work that lasted into the 1980s. However, this artistic consistency became Hartung's doom during the Nazi era, which is why great public appreciation of his work did not commence before the post-war period. Only then did his non-representational works find an interested and open-minded audience. In addition, his affiliation with the École de Paris, which was the focus of the European avant-garde in the 1950s, was particularly recognized. Hartung's pictorial inventions are free forms of a dynamic creative process, which are characterized by their special graphic gesture. As early as in the 1970s, Hartung's oeuvre was honored in Germany with a retrospective at the Wallraf-Richartz Museum in Cologne, but also with a solo exhibition at the Metropolitan Museum, New York in 1975. The New York exhibition primarily showed works from the early 1970s in which Hartung combined the linear form from the two previous decades with new, more planar elements. During this period his compositions often show broad color zones applied with a spatula or a broad, flat brush, which are fused with the fine line systems from earlier works to form expressive color tones. These two-dimensional gestures from the 1970s are by no means new in Hartung's oeuvre, as our luminous composition from 1931 shows. The extremely early abstract composition impresses with its progressive, two-dimensional, gestural imagery and the element of superimposition, both stylistic devices that will have decisive influence not only on on Hartung's further painterly oeuvre. Today Hartung's work can be admired in numerous international museums, including the Metropolitan Museum of Art, New York, the Museum of Modern Art, New York, and the Tate Gallery, London. [JS]
More Information
+
Sell
Get a free appraisal for a similar object!
+
Register for
Hans Hartung
+
Buying from A-Z
+
Contact a specialist
+
Hans Hartung Biography
Share