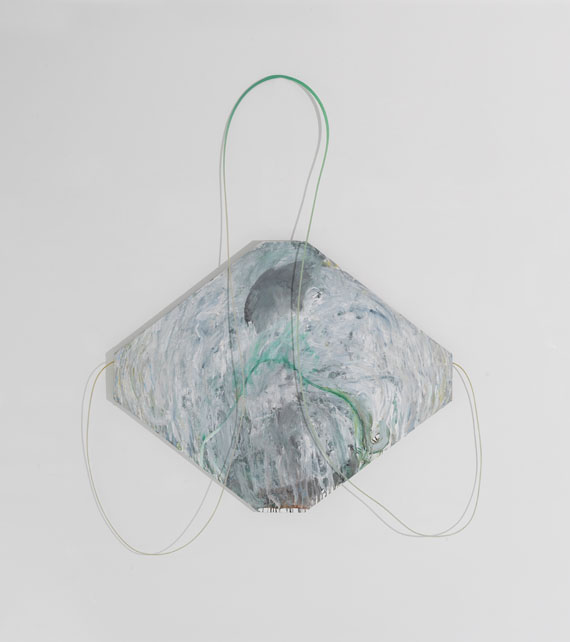 • Bright and opaque creation with gestural accentuation in jade, particularly striking for its strong spatial presence.
• One of the rare works in which Hoehme combines his signature PE- strings with a "shaped canvas".
• Similar works are at, among others, the Kunsthalle zu Kiel and the Museum am Ostwall, Dortmund.
• Hoehme is considered a protagonist of German Informalism, as well as a German pioneer in using "shaped canvases" and an advocate of the "open picture".

"The string is like a sensor. It leaves the picture towards the observer and [.] reduces the distances between observer and picture, taking the observer into the image. This way the picture no longer is a strange opposite. It creates a kind of transition between image space and our real world [.]"
Walter Biemel, in: Begegnung mit Gerhard Hoehme, ex. cat. Düsseldorf 1992, p. 91.

Essay
Gerhard Hoehme's paintings with polyethylene strings are not paintings in a classical sense, they are rather installations, spatial works of art that extend from the wall into the third dimension. The high level of artistic innovation of these years is fascinating and unique. Hoehme‘s innovations are manifold, all of which aim to remove the boundaries of painting from the classic forms of panel painting. From the 1960s onwards Hoehme has worked with upturned canvases, pattern sheets, damask, wood, cables and again and again with cords. PVC hoses and PE cords soon became the distinguishing and unique selling point of his art. The continuous course of the PE cord in the present work is particularly beautiful, as it extends far beyond the format of the canvas, especially in height. What is also special here is that Hoehme combines the plastic cord with a "shaped canvas", that is a canvas that does not correspond to the classic rectangular shape. The American Frank Stella is generally considered the inventor of the formed canvas, as he began to adapt his canvas formats to the shape of his "hard edge" picture content as early as in the first half of the 1960s. In Germany, Gerhard Hoehme and Rupprecht Geiger were among the first artists who began experimenting with shaped canvases as early as in the 1960s. In the work "Jade weit her", invigorated with bright green accents, Hoehme shaped the canvas in the diamond-like shape of a cut gemstone. The partly opaque pastel coloring, in which Hoehme builds up his dynamic abstract tangle of lines layer by layer, also goes well with this. [JS]
More Information
+
Sell
Would you like to sell a similar object?
+
Register for
Gerhard Hoehme
+
Bidding Options
+
Written bid
+
Buying from A-Z
+
Contact a specialist
+
Gerhard Hoehme Biography
Share 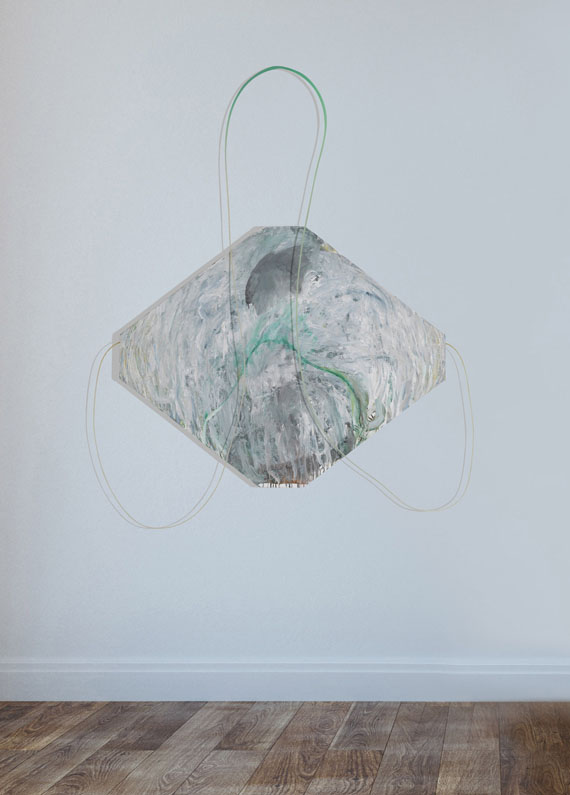 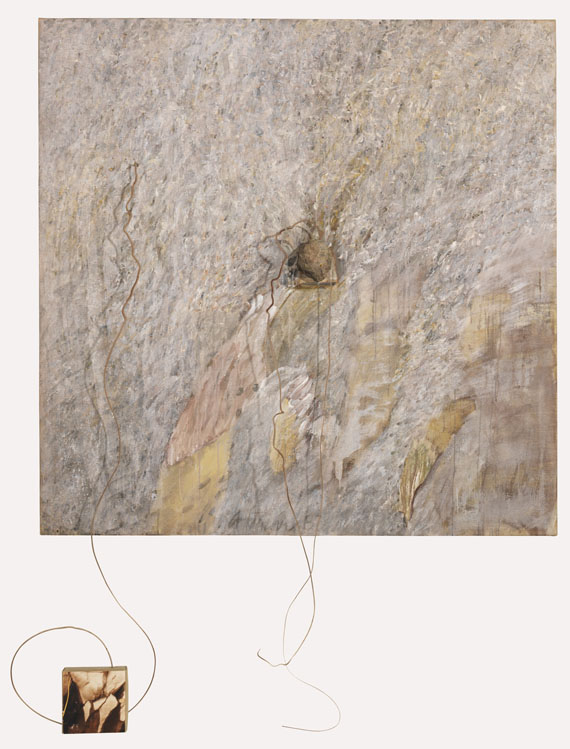 GERHARD HOEHME
Alcantara -..., 1981
Sold: € 36,250
You might also be interested in
+
and all other offers
Buyer's premium, taxation and resale right apportionment for Gerhard Hoehme "Jade weit her"
This lot can only be purchased subject to regular taxation.