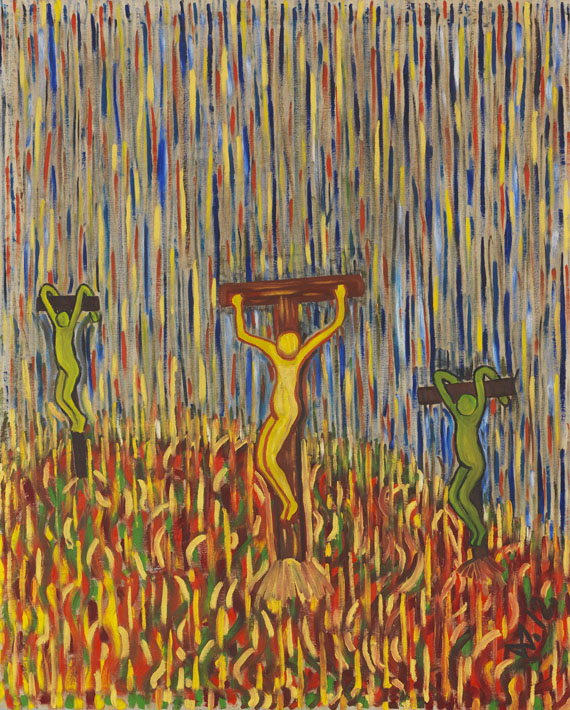 enlarge image
+
404
Wilhelm Morgner
Kreuzigung, 1912.
Oil on canvas
Post auction sale: € 40,000 / $ 47,600
Lot description
Kreuzigung. 1912.
Oil on canvas.
Lower right monogrammed and dated. Verso dated, titled and inscribed by a hand other than that of the artist. 130 x 104.5 cm (51.1 x 41.1 in).
The canvas was completely refurbishd in 1970. By a hand other than that of the artist inscribed "Restauriert 1970" in upper right and "Kreuzigung Morgner 1912" in center on verso of the canvas steadied with gray paint. (See condition report).
• Wilhelm Morgner is considered an exceptional expressionist talent
• In 1912, the year this work was made, Wilhelm Morgner took part in the 'Sonderbund' exhibition in Cologne
• Characterized by the expressiveness of the pure color – a typical trait of Wilhelm Morgner
• Seminal work by the artist who fell on the battlefield in 1917 at the young age of 26.

The work is registered at the Wilhelm-Morgner-Archive, Soest, with the number G 301. The archive uses 'G' numbers for dubious and unsettled cases.

Essay
Wilhelm Morgner's unusual image conceptions can be perceived as disturbing even today. For Morgner it is not just about adopting and integrating certain stylistic elements into his work. Building on his models, especially on Van Gogh, Morgner creates a world of images he realizes in his own style of painting. The technique he developed from Divisionism, which is characterized by color parallelisms that often have a vexing effect, has a creative power that adds a new dimension of expressiveness to his themes. A crucifixion scene, the emotional character of which is often overemphasized in art, is stripped of all pious decorations in order to become a mere display. Morgner therefore indirectly forces the viewer to understand a process in real terms without using pictorial details that would facilitate comprehension. The radical approach with which Morgner depicts the scene aims at triggering the same radical sensation in the observer's mind. The artist said about himself: "I can only become an artist if I shatter myself. If I don't do that, I will neither be able to experience infinity nor to convey it. I have come to terms with the fact that I have to sacrifice." (Quote from: Hans Lühdorf, Wilhelm Morgner, Westphalia, Hefte für Geschichte, Kunst und Volkskunde, Münster 1952, booklet 1, p. 57). In 1913 the artist was drafted into military service and fell in battle near Langemarck in 1917. It was only through the rediscovery of Expressionism in the 1950s that this pioneering artist finally gained the recognition he deserves as one of the best of his time. [EH]
More Information
+
Sell
Would you like to sell a similar object?
+
Register for
Wilhelm Morgner
+
Bidding Options
+
Written bid
+
Buying from A-Z
+
Contact a specialist
+
Wilhelm Morgner Biography
Share

You might also be interested in
+
and all other offers
Buyer's premium, taxation and resale right apportionment for Wilhelm Morgner "Kreuzigung"
This lot can be purchased subject to differential or regular taxation.