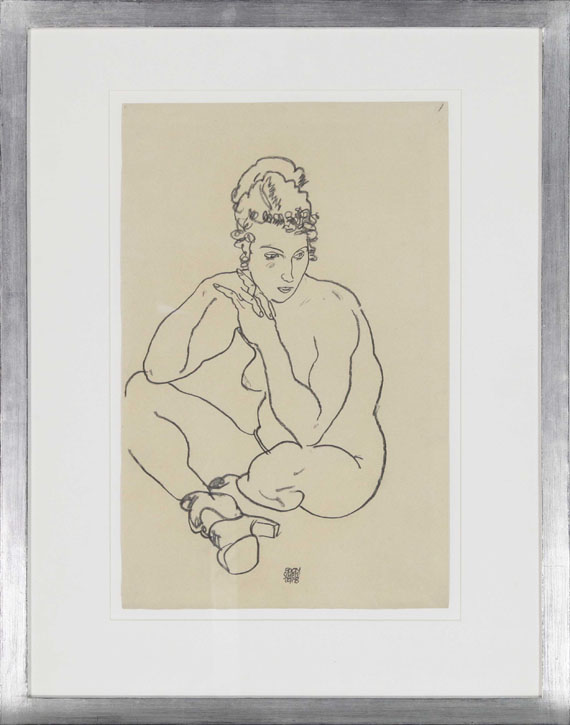 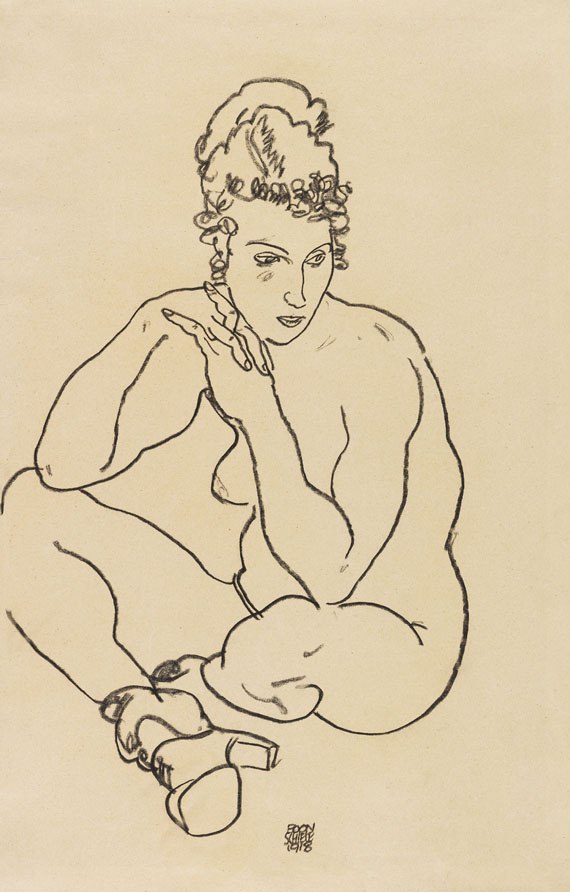 • Privately-owned for more than 40 years.
• Made the last year of Egon Schiele's life.
• Another drawing from this motif series is part of the collection of the Gemeentemuseum in The Hague.

We are grateful to the Kallir Research Institute for the kind support in cataloging this lot.

Along with Oskar Kokoschka, Egon Schiele was the most prominent representative of Viennese Expressionism. By deliberately violating the true and the good, breaching the contrast between the beautiful and the ugly, both artists succeeded in breaking free from the beauty cult of the Vienna Secession around Gustav Klimt. In contrast to the latter, Schiele's drawings and watercolors open up a new aestheticization of the erotic for the viewer; he appreciated and ennobled the intimate female body in the sum of the individual poses in a particularly exposed and at times ‘overly dramatic’ way. Schiele rarely staged the bodies of his model in not clearly identifiable spaces or on imaginary stages. Strong lines and pronounced contours form the characteristic moment in Schiele's works on paper. This also includes a suggestive, slightly shaky and irregular line; which is also owed to the execution of the drawing on grained wooden board.
Since 1915 Egon Schiele has been drawing a series of nudes and portraits of his wife Edith Harms, whom he had married in June that same year, but also of her older sister Adele Harms. Their natural, physiognomic similarity makes it difficult to tell the two sisters from one another. Edith is blond and Adele is dark-haired, but Schiele did not waste much thought on hair colors and often deviated from the actual sitter. Nevertheless, a clear identification of the sitter in this black chalk drawing is even more difficult than it might be the case with a watercolor, however, the speculative probability that this nude shows Adele is very high. As it was generally the case during these years, Schiele also made this fine portrait study of his sister-in-law with naturalistic features and from a slightly elevated position. For this purposes he used simple black chalks, rendered the body with a wonderfully flowing contour and aptly characterized the extremely soulful and melancholic facial expression. In comparison with her sister Edith, Adele’s chin is a lot more pointed, which Schiele seems to emphasize, the slightly disheveled high-piled hairdo also speaks for Adele, who tries to avoid eye contact with the artist, by resting her head on her interlaced fingers with a smile on her face. [MvL]
More Information
+
Sell
Get a free appraisal for a similar object!
+
Register for
Egon Schiele
+
Buying from A-Z
+
Contact a specialist
+
Egon Schiele Biography
Share