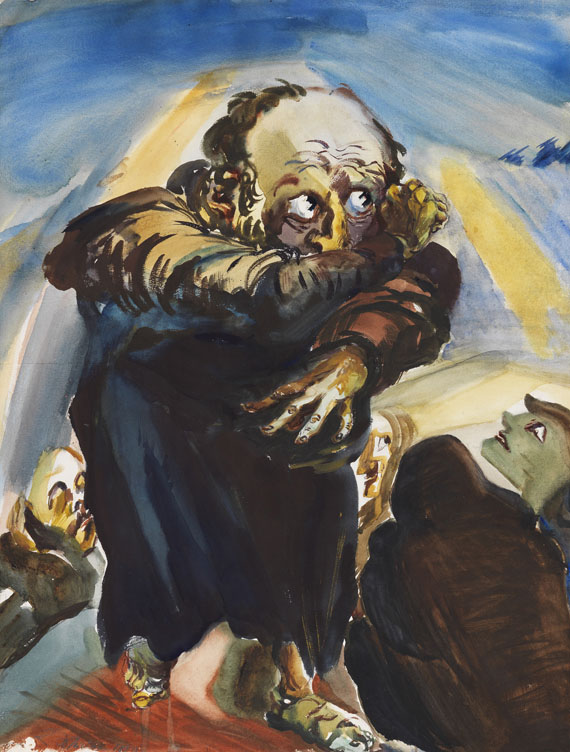 We are grateful to Mr Erik Riedel, Ludwig Meidner Archive, Jewish Museum, Frankfurt am Main, for his kind expert advice.

Essay
"I settled my distress working night and day, doomsday, apocalypse and skulls, because in those days the worlds‘ turmoil cast a glaring shadow over my whimpering brush hand", saidLudwig Meidner about the prophets in retrospect in 1919. (Quote from: Lothar Brieger, Ludwig Meidner, Junge Kunst, vol. 4, Leipzig 1919). In 1916, Meidner was drafted into the military and served inthe infantry where heinterpreted for French prisoners of war. Meidner processedthe miseriesexperienced at the front in sketchbooks, which he calls the "Psalm Book" comprising drawings ofprophets and Zealots in contemporary uniforms next to studies of coffee house scenes expressing his highly emotional viewsof the current events. Returning to Berlin in August 1918, Meidner, who meanwhile had signed with the gallery owner Paul Cassirer, began to study the Old Testament, delvedinto Sibylline books and writings on prophets, and rendered what he had read in full sheet depictions ofimpetuous or disbelieving figures like it is the case here with apostle Paul sermonizing. With his eyes wide open as if begging forhelp, his face hidden behind closed arms, the Prophet seemsto be looking for words which he will immediately say to those curiously listening. Meidner's prophets are no supermen who proclaim the doomsday announcements, lamentations and the healing wordsof God as described in the Old Testament. Meidner allows his prophets to make emotional gestures, tearat their hair, have doubts, ask questions, be supplicators just like their listeners. [MvL]
More Information
+
Sell
Would you like to sell a similar object?
+
Register for
Ludwig Meidner
+
Bidding Options
+
Written bid
+
Buying from A-Z
+
Contact a specialist
+
Ludwig Meidner Biography
Share 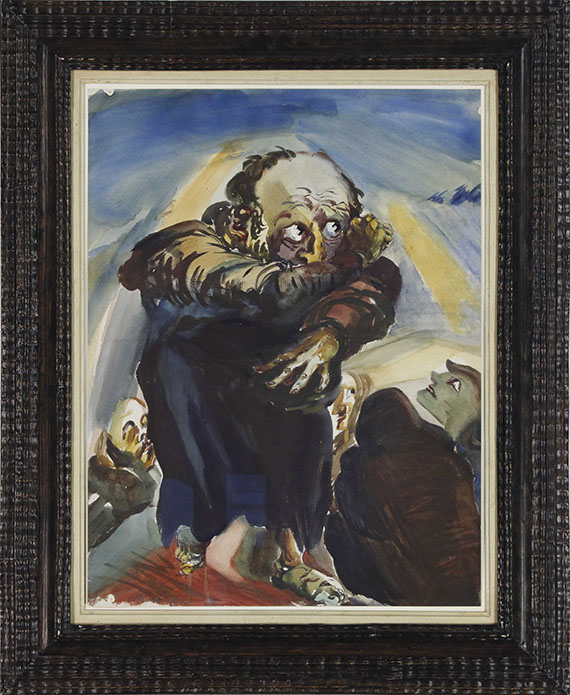 More offers for Ludwig Meidner
+
and all other offers
You might also be interested in
+
and all other offers
Buyer's premium, taxation and resale right apportionment for Ludwig Meidner "Die Pauluspredigt"
This lot can be subjected to differential taxation plus a 7% import tax levy (saving approx. 5 % compared to regular taxation) or regular taxation.