Lot 231
Back side
Frame image 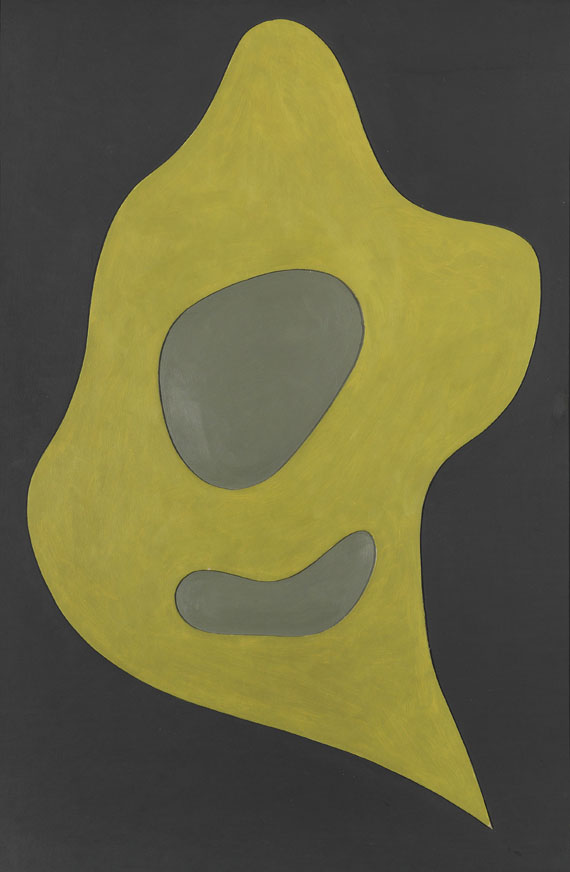 Hans Arp, whose amorphous visual language still exerts a particular fascination today, is an outstanding representative of the international vanguard of the pre- and post-war period. From his initial fascination with the "Blauer Reiter" to his membership of the "Cabaret Voltaire" - a group of artists from which the Dada movement emerged in 1916 - his interest led him to Surrealism and finally to the group "Abstraction-Création". From 1917 the first wooden reliefs, simultaneous and automatic poems were created. He was involved with the Cologne Dada circle and the Paris Dada movement and worked with Schwitters on various publications. However, Arp soon expressed spontaneity and instinct in his famous biomorphic reliefs in addition to arbitrarily assembled collages. Arp found his characteristic shapes during a stay in Ascona in April 1917: "In Ascona I drew [.] branches, roots, grasses, stones [.]. I simplified them and united their nature in moving oval symbols of transformation and of becoming a body. " (Hans Arp). Arp illustrated the constant changes in nature with its inner forces in reliefs, works on paper and sculptures. But it is precisely in his famous reliefs that Arp's extraordinary artistic progressiveness becomes particularly clear, as they expand the painting surface into three-dimensionality and thus already made an important contribution to the "open image" as of the 1920s. Arp anticipated one of the central endeavors of abstract post-war art, its ambition to delimit the image was expressed from the 1960s onwards, among others, by Frank Stella‘s "Shaped Canvases". The idea of a painting surface formally adapted to the picture content was applied in in Arp‘s reliefs. Arp illustrates the process of becoming and passing away in the form of masses that gently merge into one another. This biomorphic repertoire of forms was soon regarded as his artistic trademark and in the 1950s at the latest it became an international vanguard symbol of post-war modernism. His first reliefs were shown as early as in the 1936 exhibition "Cubism and Abstract Art" at the Museum of Modern Art, New York, which today is in possession of almost two hundred works from all his creative periods. In the 1940s and 50s Arp was represented in America by important art dealers such as, among others, Buchholz Gallery, Curt Valentin Gallery and Sidney Janis Gallery in New York. In 1958 the first solo exhibition at the Museum of Modern Art followed and in 1969, three years after Arp's death, the Solomon R. Guggenheim Museum showed a grand retrospective. The softly colored composition "Gurife II", whose counterpart "Gurife I" is in the Würth Collection today, owes its title to the artist's creative play on words with the word "Figure", is one of the works with a wonderfully diffused surface from the 1950s. With its anagrammatic title it creates a beautiful connection between Arp's artistic Dada beginnings and his characteristic, mature forms of the 1950s. In addition, the light gray, hole-like internal shapes are reminiscent of the simultaneous efforts of Lucio Fontana, whose simultaneously made "Concetti spaziali", the perforated or cut canvases, also made a significant art-historical contribution to post-war modernism. [JS]
More Information
+
Sell
Get a free appraisal for a similar object!
+
Register for
Hans (Jean) Arp
+
Buying from A-Z
+
Contact a specialist
+
Hans (Jean) Arp Biography
Share