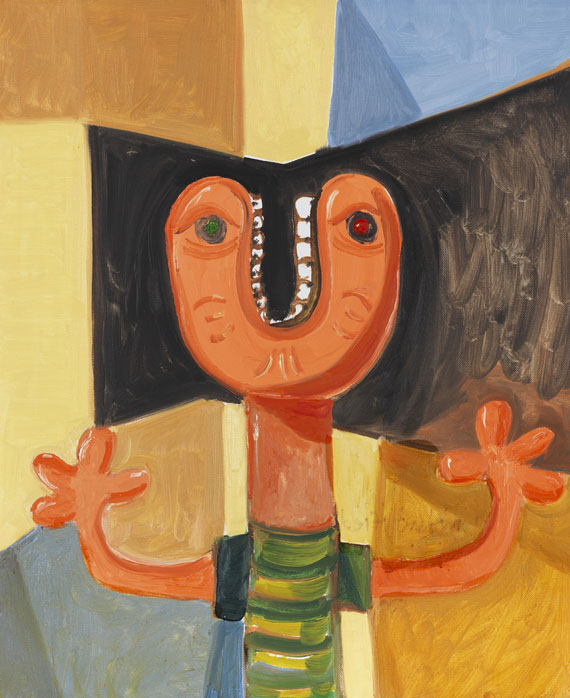 "It's not just about a confrontation with other artists, it's about the idea that I create my works from the confrontation with myself, and I face up against ny demons, my depressions, my fortune and my existence."
George Condo, 2016

Essay
Ever since his beginnings in the New Yorker East Village in the early 1980s the US artist George Condo has created an unmistakable oeuvre. His painting, which is characterized by surreal absurdity and exuberant pathos, is ironic, grotesque and simply funny. Time and again Condo references works and styles of American and European art history which he skillfully combines with elements of American Pop Art. In doing s, he manages to cover a couple of centuries with ease. Next to the art of Velasques we also find the changeful work of Picasso at the center of teh American artist's creation, who himself started out at Warhol's Factory and closely worked with Keith Haring and Jean Michel Basquiat. In 2011/12 his art was honored in a comprehensive retrospective exhibition which was on display at the New Museum in New York, the Museum Boijmans Van Beuningen in Rotterdam, the London Hayward Gallery and the Schirn Kunsthalle in Frankfurt.In 2016/17 a fascinating solo show at the Museum Berggruen in Berlin followed in which George Condo's works were contrasted with masterpieces from Cézanne, Picasso, Matisse, Klee and Giacometti. This cross-epochal comparison is amusing and provokes new approaches and reception processes that can be likewise fruitful for both sides: Condo's wild and sometimes grotesque exaggerations recollect the radicalness of art in the early 20th century and the painters of Modernism, in return, help to reflect Condo's exuberant joy in playing with art-historic references and how he self-confidently breaks traditional artistic conventions. In "Unidentified Head" Condo masterly plays with the centuries-old tradition of the portrait genre, the interlocking color fields call reminiscence of Poliakoff, while the four finger figure with its U-shaped sausage head looks like a modern animated cartoon figure that is, despite its enormous jaw, funny in a disturbing way. Most of Condo's works, just as it is the case with "Unidentified Head", are sophisticated psychic profiles: "It's not just about a confrontation with other artists, it's about the idea that I create my works from the confrontation with myself, and I face up against my demons, my depressions, my fortune and my existence." (George Condo, 2016, quote after: https://kunstaspekte.art/event/george-condo-confrontation-09-2016). Condo, the master of a new figuration, who intentionally integrates ugliness describes his painting as "Artistic Realism" or as "Psychologic Cubism", as it is an artistic approach to visualize several mental states at the same time, just like Picasso who showed a violin from different perspectives at the same time.
Works by George Condo are in possession of many acclaimed international museums and public collections, among them the Albright-Knox Art Gallery in Buffalo, the Museu d`Art Contemporani in Barcelona or the Museum of Modern Art and the Solomon R. Guggenheim Museum in New York. [JS]
More Information
+
Sell
Would you like to sell a similar object?
+
Register for
George Condo
+
Buying from A-Z
+
Contact a specialist
Share 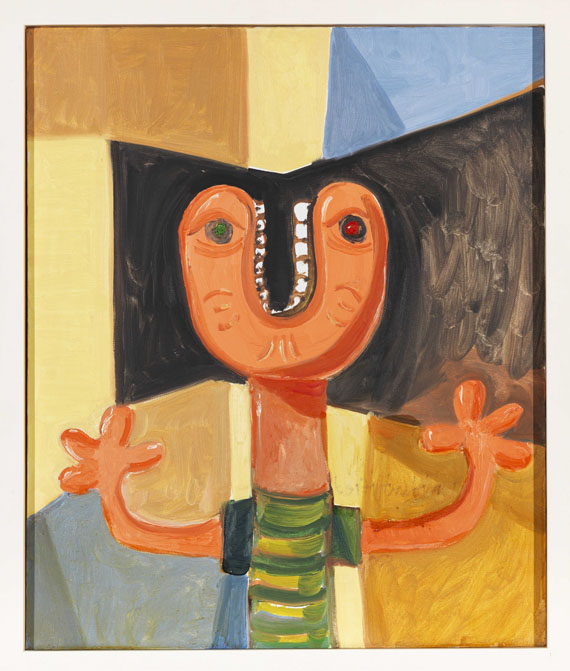