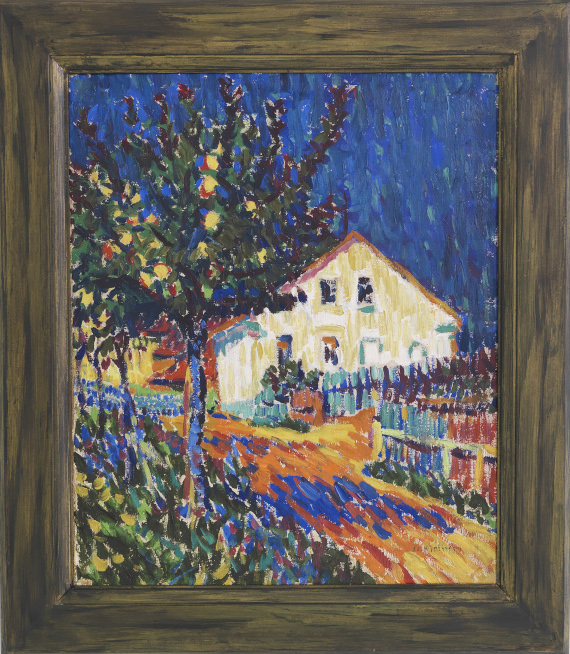 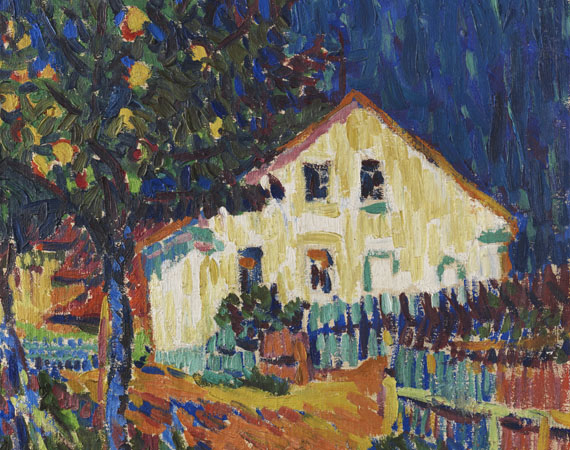 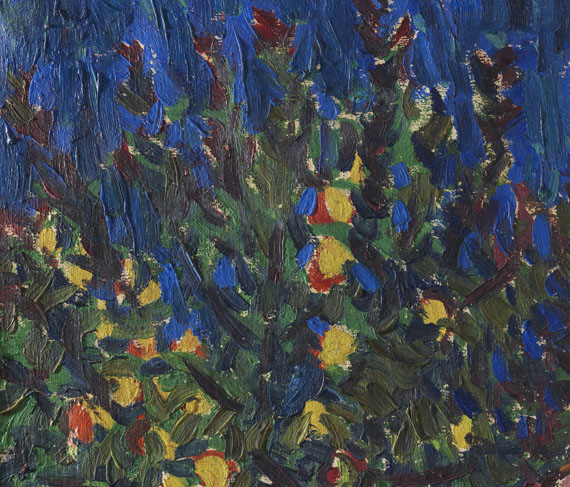 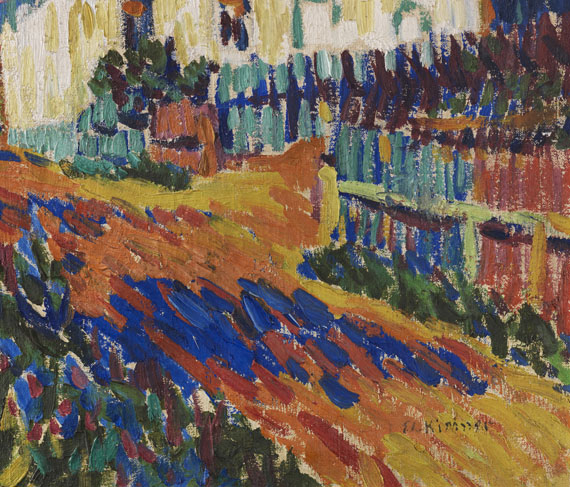 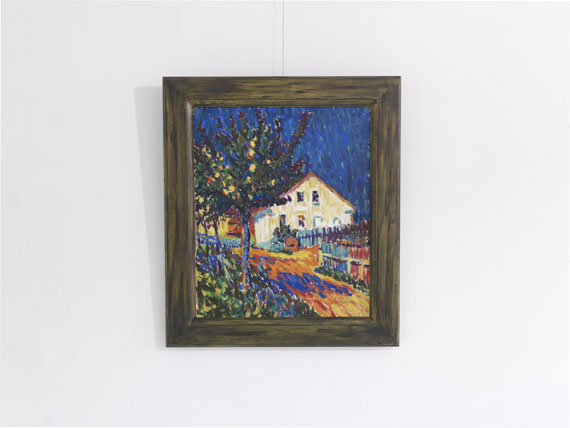 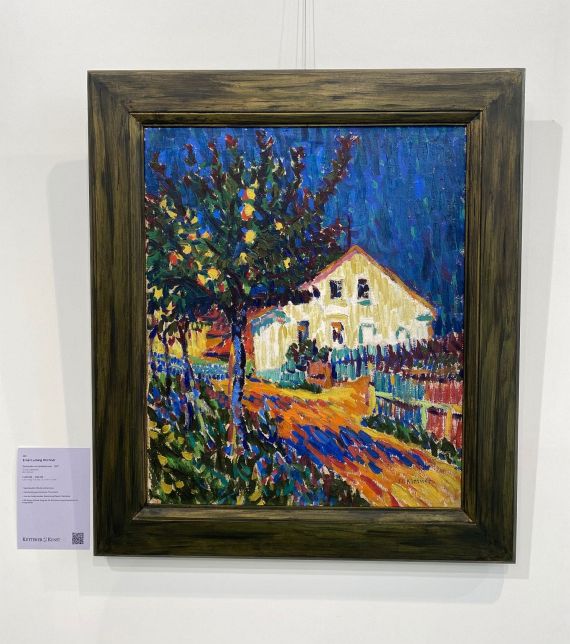 Accompanied by a written expertise issued by Dr. Wolfgang Henze, Wichtrach/Bern, on June 24, 2020. The work is registered at the Ernst Ludwig Kirchner Archive Wichtrach/Bern, and will be included into the forthcoming addenda of the catalog raisonné.

Kirchner's scene of an idyllic suburb with houses, front gardens, and a fruit tree lined alley was made during a first phase of stylistic orientation and follows the French, neo-impressionist Divisionism of Georges Seurat and Paul Signac, as well as the expressive painting by Vincent van Gogh. Kirchner and other members of the “Brücke” group had the chance to study all these artists in exhibitions in Dresden: meaning they came across those short and swift brushstrokes that dissolve the colored areas, but as juxtaposed here, of various, quite contrasting colors, which, according to Signac's concept, subjectively harmonize the motif‘s expressive, so to speak 'wild' impression in the observer‘s eye. While Karl Schmidt-Rottluff and Erich Heckel spent the summer in Dangast, Kirchner and Max Pechstein painted in Goppeln, a small village on the southern slopes of the Dresden Elbe Valley. At the end of the 19th century, Goppeln was discovered by a group of young artists who had turned to plein-air painting and Impressionism. Painters such as Carl Bantzer, Robert Sterl and Paul Baum went down in Dresden's art history as the "Goppeln School".
Kirchner painting in Goppeln
Among the paintings by Kirchner created there "Grünes Haus" (Gordon 26), "Obstbäume" (Gordon 25) and "Dorfstraße mit Apfelbäumen" (not in Gordon) have survived up until today. Compared to the strict Pointillism as demanded by Signac, Kirchner opens it up a little more and did not only arrange the motif of the "Grünes Haus" with high-contrast primary colors, but also adapts the brushwork to the respective details, such as it is the case with the facade in light green and orange in vertical lines and the windows rendered in a light blue. This blue enters into a dialog with a powerful red on the roofs of the other buildings. Kirchner interprets the fruit grove in a liberating Fauvist manner. The treetops interwoven under a bright yellow sky, their crooked trunks in black and purple while the path is suggested in earthen tones. With a view onto the facade of a crouched country house, Kirchner arranges the village street along the apple trees in strong and vividly distribution of strong colors. With a few brush strokes Kirchner structures the architecture, which asserts itself in a golden yellow hue against the deep, strongly staged blue of the sky. Accurately arranged lattice fences line the hidden garden and delimit it from the path that soaks up the blue shade cast by the fruit trees in a setting sun. A wonderful summer day that Kirchner depicts in this landscape with apple trees full of ripe fruits described in exuberant color nuances.
Kirchner studies Vincent van Gogh
These first paintings by Kirchner already show the resoluteness that would become typical of him in dealing with the motif as well as a characteristic coloring which was not necessarily very objective. The exhibition of around 50 works by Vincent van Gogh on display at Galerie Arnold in Dresden in November 1905, did not only have strong impact on Kirchner, but also on the other members of the "Brücke" at the then early stage of their artistic career. Nowadays it is hard to say which paintings and drawings caught Kirchner‘s fancy at that time, and if so, we can only speculate about that. At Arnold, for example, he saw van Gogh's "Blooming Orchard", which he may have had in mind when he chose these fruit trees (Gordon 27) as motif and merely used the structure to realize this "Weg mit (Obst)-Bäumen“ (path with (fruit) – Trees)” swiftly and with a spirited brush flow. Although a direct comparison can be reduced to the architecture, a tree alley and the path as such, the "Blooming Orchard" can also serve as model for "Dorfstraße mit Apfelbäumen". For his composition, Kirchner borrowed the structure and perspective presented by van Gogh and opted for a characterful and powerful brush flow in order to realize his motif with a contrasting palette. Years later, in a letter to Gustav Schiefler dated December 15, 1924, the artist recalled this landscape in a different context, "in which I once tried painting with lines". With this rather casual statement, Kirchner refers to a time when he gained technical experience in painting.
The provenance
"Dorfstraße mit Apfelbäumen" is not dated, it was not signed by Kirchner, but by Erna Schilling instead, as she handled the sale in Berlin while he was absent during the war and in Davos in the following. Accordingly, she signed "unsigned" paintings. The fact that inexperienced Erna made mistakes like this one here shouldn’t confuse us. According to a shipping list written by Erna on April 15, 1918, this early landscape, created in the summer of 1907, was sent to “Dr. Rauert, Hamburg Kleinflottbeckerw”, it was titled “Dorfstrasse Haus mit Obstbäumen u. Zaun” and became part of the renowned collection of Martha and Dr. Paul Rauert in Hamburg. In a letter from Gustav Schiefler to Kirchner dated April 16, 1924, Rauert confirmed the painting "Dorfstraße mit Apfelbäumen" in a list of his six Kirchner paintings at the artist's indirect request. The "Dorfstrasse", another (short) title for this painting, remained part of the Rauert Collection until 1937. In June he sold the painting to the art historian and art dealer Hildebrand Gurlitt in Hamburg, who, after his dismissal as head of the Hamburger Kunstverein, became an independent art dealer in July 1933. The same month he was able to sell “Dorfstrasse” to a collector in Mülheim, in whose estate it remained up until today. [MvL]
More Information
+
Sell
Get a free appraisal for a similar object!
+
Register for
Ernst Ludwig Kirchner
+
Buying from A-Z
+
Contact a specialist
+
Ernst Ludwig Kirchner Biography
Share