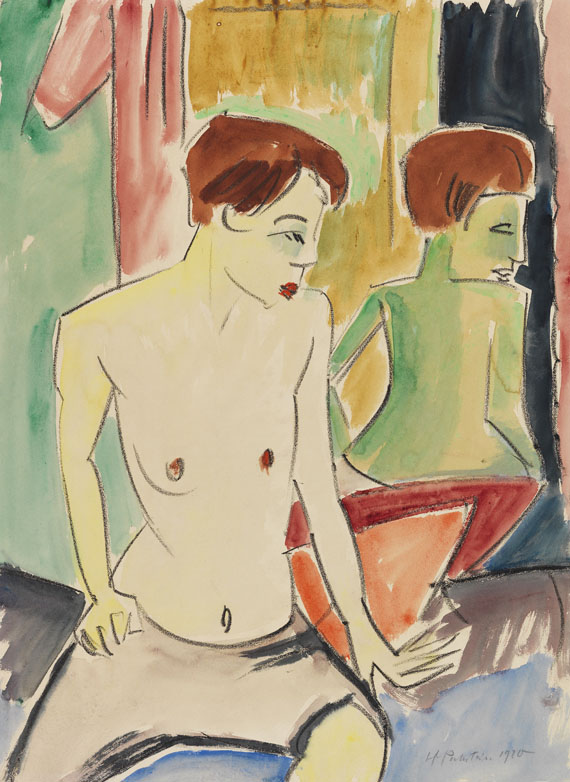 • The young model invigorated Pechstein‘s creativity
• Superbly accentuated scene in strong watercolors
• In the reflection the naked body becomes a sculpture of an exotic appeal.

Essay
Pechstein captured the slim model seated on a divan covered with pillows in front of a mirror with just a few, elegantly set pencil contours. She slightly turns her gamine body to the side, her face to the right, her torso is bare, and she has a fashionable short haircut. The reflection in the mirror doesn't necessarily show her back, nor the other half of her face; the body shown in the reflection seems to have mutated into a sculpture with an exotic appeal that calls reminiscence of South Sea art. Pechstein is obviously quite fascinated by the young lady, accentuates the intimate scene with strong watercolors, splits the spatial situation up into an illuminated here and now and a somewhat shadier hereafter. A bold green that alternates with red dominates the scene while black and yellow add harmony the sheet. One can only speculate about the model‘s identity, it‘s likely she had something to do with Pechstein's reorientation. Pechstein spent the summers of 1919 and 1920 in Nida, just like the years before. However, as a result of new borderlines - Nida became part of Lithuania - the artist was forced to look for a new 'paradise' for his summer work stays. He and his wife Lotte gave up Nida as their domicile and in April 1921 Pechstein went to the fishing village of Leba in Pomerania, a little further north of Gdansk and closer to Berlin, for the first time. "I set off with only the most essential material in my backpack. With the help of my map I found what I was looking for in East Pomerania: a similar spit between Lake Leba and the Baltic Sea. I marched westward along the Baltic coast and finally decided to make Leba my new summer base." (Max Pechstein, Erinnerungen, Stuttgart 1993, p. 41). There he met 16-year-old Marta Möller and her sister Lisa, who would both go down in many of Pechstein's paintings. In line with early 1920s fashion, Marta got her hair cut short at an early point. And why shouldn't Pechstein have met her as early as 1920 – as the date indicates? Perhaps on a last trip to Nida? Two more watercolors with the youthful model were presumably made immediately afterwards and deliver proof of Pechstein‘s enamored interest in the young lady. Pechstein and Lotte (Charlotte Kaprolat) broke up and Max Pechstein married Marta Möller in Leba in September 1923. "It stayed that way for the following years and I didn't regret it. Not only did I learn to appreciate this coastline, I also learned to love it." (ibid.). [MvL]
More Information
+
Sell
Would you like to sell a similar object?
+
Register for
Hermann Max Pechstein
+
Buying from A-Z
+
Contact a specialist
+
Hermann Max Pechstein Biography
Share 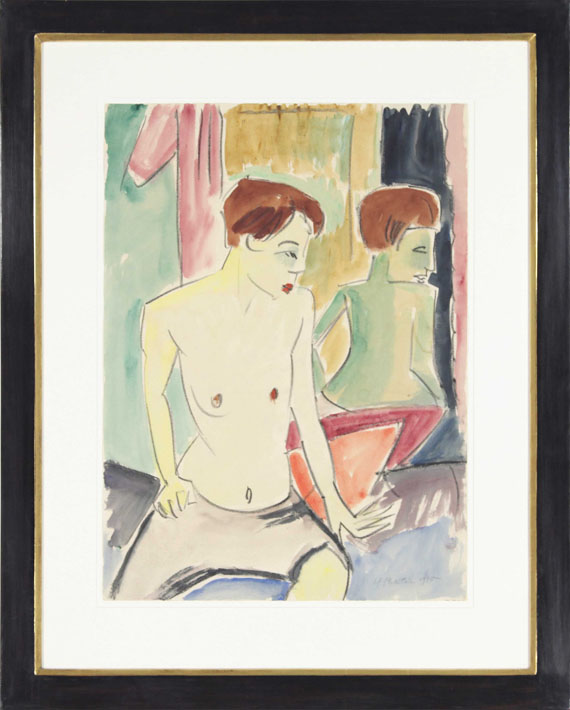