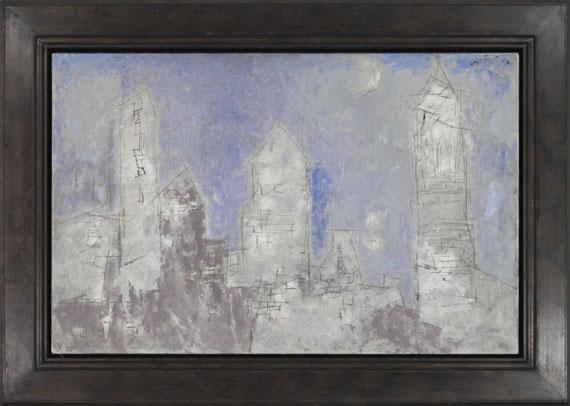 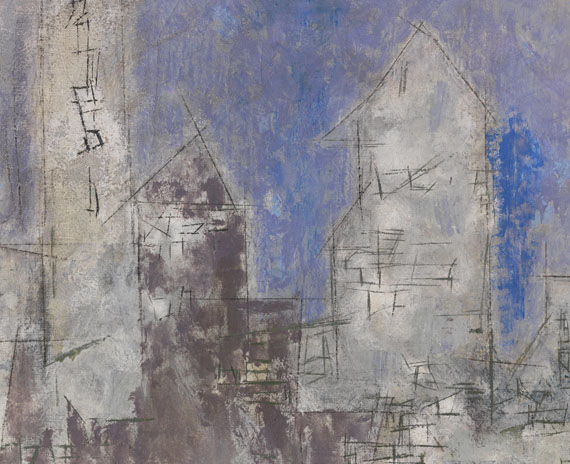 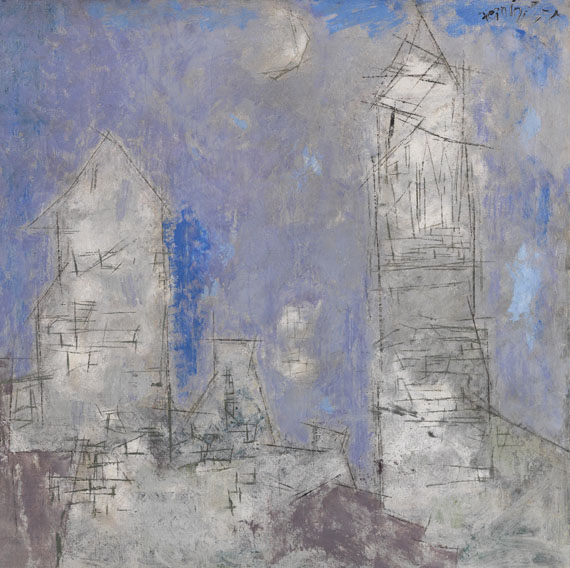 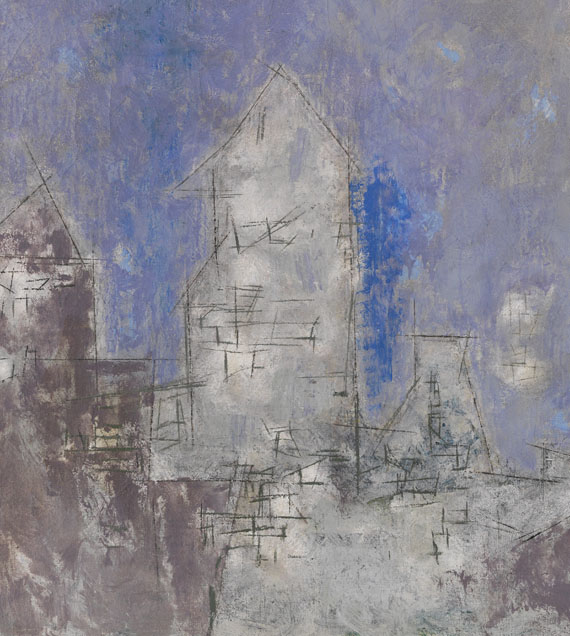 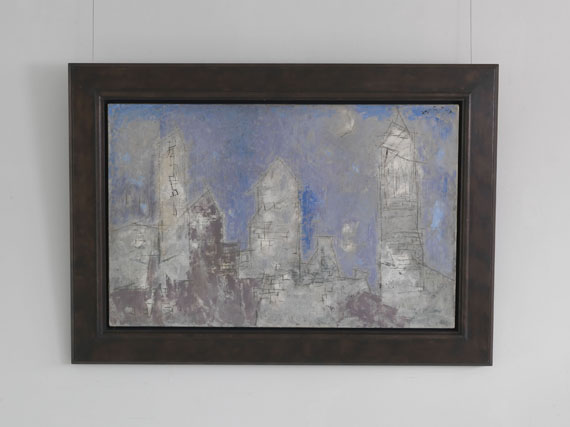 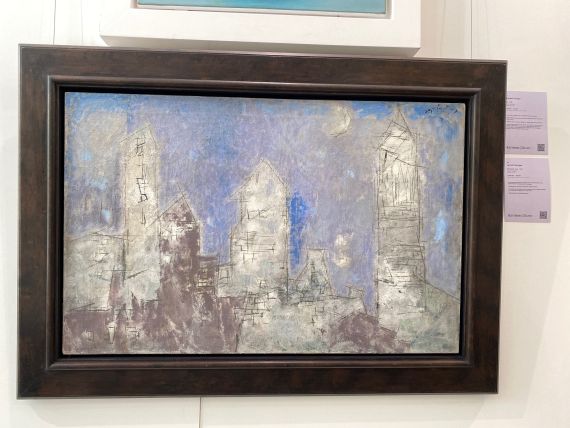 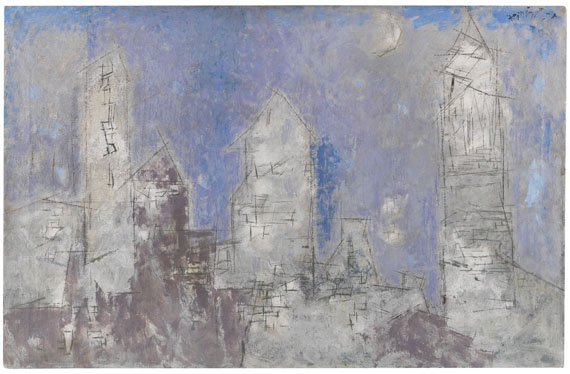 • New York's imposing skyline at dusk in Feininger's unique signature style
• Reminiscent of the early Weimar townscapes
• The motif is graphically reduced to the essence of its actual form
• Paintings from the Manhattan Series are in possession of, among others, the Museum of Modern Art, New York
• Remarkable exhibition history.

"I am currently working on a couple of architectural 'visions'. New York as motif for the transfer into symbols of space and atmosphere. In terms of ambience, color and contrasts, New York is the most astonishing place in the world. I rendered some of my works in a new technique, graphic elements as lines in fields of strong colors. I had to come to the US to break free from the constrictions of the straight and rigid line."

Coming home abroad
In 1887 Lyonel Feininger left his homeland America at the age of 16, in order to complete his musical education in Germany. What ultimately caused Feininger to switch from music to art is not known, however, when he arrived in Hamburg he began to take drawing lessons at the Arts and Crafts School, and thus his artistic career commenced. He retained American citizenship, whereas he had found a new home in Germany, where he would become one of the main protagonists of modern art at the Bauhaus. When the situation in Germany worsened in the 1930s, Lyonel Feininger initially hesitated to leave the country, which would have been an easy step for him as an American-born, in contrast to many others seeking asylum in the U. S. At the invitation of Alfred Neumeyer he taught a summer course at Mills College in Oakland in the summer of 1936. It turned out to be a journey during which Feininger deepened existing contacts, for example with Galka Scheyer, the art agent who had passionately been trying to increase the popularity of the "Blue Four" - the group of German artists she had brought together - in the U. S. A. since 1924, as well as with the art dealer JB Neumann, who had been making efforts to establish German art in America for many years. After completing his teaching assignment, the Feiningers initially returned to Germany. Preparations for the “Degenerate Art” exhibition, scheduled for Munich in the summer of 1937, which also included works by Lyonel Feininger, were already underway in spring that year. At the same time the artist was summoned by the National Socialist authorities in his district. Both this fact and the Jewish ancestry of his wife Julia ultimately lead Feininger to accept the second call to Mills College, this time for good. He had mixed feelings about the new beginning in America. In a letter to Alois Schardt he wrote: "One day the story about me will be told that I arrived the port of New York at the age of 65 with just two dollars in my pocket." (Quote from Peter Selz, Lyonel Feiningers Rückkehr nach Amerika, p. 348, in: Roland März (ed.), Lyonel Feininger von Gelmeroda nach Manhattan, 1998).
At the age of 65 he had to restart both his private and professional life all over again. He assessed the situation he was in quite soberly and it was clear to him that he would not be able to tie in with the successes he had had in pre-Nazi Germany. In his homeland his art was known only known to a small circle of lovers of European art. It took him quite some time to get accustomed. He made ends meet with commissioned works which did not really help much to continue the development of his art, and it was not until 1939 that he slowly began to paint in oil again, only a few works that took up his popular ship and sea motifs came into existence again.
Manhattan
New York is the cultural center of the U. S. Lyonel and Julia Feininger lived in a small apartment near Gramercy Park, with a view of East River. Feininger coped with his new reality in an artistic way, and in 1940 he began to make first accounts of his everyday surroundings in Manhattan. His new environment required strong reorientation and a development of new pictorial forms. The difference between "old world" architecture and the impressions of his new surroundings could hardly be greater. In Germany he was fascinated by medieval architecture, which he translated into his modern design language, as his iconic works of Gelmeroda or Halle show. However, modern American high-rise architecture in New York already is a concentrated form per se. Manhattan's skyscrapers are inherently enormous and neither require nor allow any artistic exaggeration or monumentalization. Architecture has already expressed modern art in a reality of steel, glass and concrete. For Feininger, this was the real challenge of the late Manhattan pictures. The monumentality already given by Manhattan's impressive skyline led him to an artistic dematerialization. The visual motif becomes the essence of its real form. The graphic line remains of key significance in Feininger's visual language. The lines circumscribe the surface, the surface created by the lines carries the structure of the picture, whereby the soft color conduces to the given form. What is characteristic of these late pictures is the use of the line, which shows an unprecedented degree of resolution. His works became more graphic, the lines appear increasingly exposed, stand-alone and clearly more visible than in works from previous years. At the same time, they bear and determine the entire reserved yet complex composition.
Feininger himself described this development as follows: "The form is reduced to a minimum - and the entire apparatus of color and painting style is reduced to the most simple degree - like ballast thrown overboard in order to fly freely" (from a letter from Lyonel Feininger, Falls Village, Connecticut, July 26, 1944, quote from: Hans Hess, Lyonel Feininger, Stuttgart 1959, p. 158). In “Manhattan, Dusk” Feininger renders a particularly appealing account of the light at dusk. Last pale rays of light are reflected in the high-rise building’s glass surfaces. Feininger masterfully staged the subtle shine of the subdued light of these early evening hours with the help of shimmering metallic colors.
His palettes is subdued and Feininger's use of colors increases the scene’s ‘unreal’ appeal and contributes to its level of abstraction. Applied flat and unmixed they fill in the spaces between the mesh of graphic lines. A striking sparseness in form and color became the essence and character of Feininger's late works. [SM]
More Information
+
Sell
Get a free appraisal for a similar object!
+
Register for
Lyonel Feininger
+
Buying from A-Z
+
Contact a specialist
+
Lyonel Feininger Biography
Share