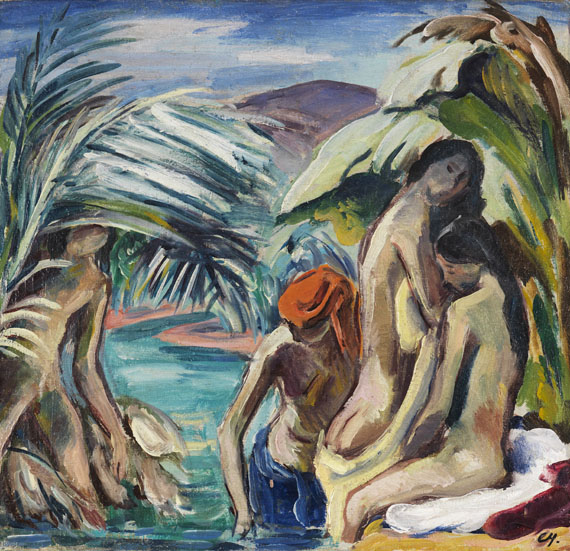 • One of the rare exotic compositions made in context of Hofer's journey through India.
• Bright early work, particularly convincing for its closed composition.
• Up until 1937 the work used to be in the collection of the Wallraf-Richartz-Museum, Cologne (no restitution claims).

Essay
Karl Hofer committed his entire artistic creation to the depiction of man. His timeless melancholic view of man would soon make for Hofer’s breakthrough and eventually earned him a permanent place in 20th century German art history. Right after the painter had reached the peak of his artistic career he faced harsh criticism from the National Socialists, while, on contrary, art critics of the post-war era criticized his art for being out-of-date in context of upcoming abstract tendencies. Hofer’s figure pictures made in the course of his two journeys through India, which are of decisive relevance for his inimitable style, are very rare today. The memoirs from 1953 deliver an account of his first stay in India and almost seem like a description of our painting "Tropisches Bad", as he describes the "delicate and airy leaves" of the coconut palm and the bright red soil as the predominant motifs found on the Indian coast. With financial aid from the Swiss industrialist and collector Theodor Reinhart, Hofer embarked on his first five-month journey through India in October 1910. However, Hofer apparently destroyed most of the works he had made there before his return to Germany. In February 1913 he went to India again. This colorful painting "Tropisches Bad", which is particularly impressive for the completeness of its composition, must have come into existence in context of this second trip. The artistic focus is not solely put on the representation of the nudes but rather on the impressive formal harmony of the human bodies and the exotic nature they are surrounded by. The red turban and the red soil of the coastline make for a marvelous color accentuation and put the composition’s exotic elements, next to the palm leaves, at the center of the composition. The painting "Tropisches Bad" had been part of the collection of the Wallraf-Richartz-Museum in Cologne since 1922 and fell victim to the Nazi’s “Degenerate Art” museum lootings in 1937, just as it was the case with a lot of other of Hofer’s works. Many of the confiscated works were destroyed or sold abroad in exchange for foreign currency through the Galerie Fischer in Lucerne or art dealers like Böhmer and Gurlitt. In this light it is all the more fortunate that this early Hofer painting became part of a Northern German private collection soon after the war where it would remain up until today. [JS]
More Information
+
Sell
Would you like to sell a similar object?
+
Register for
Karl Hofer
+
Buying from A-Z
+
Contact a specialist
+
Karl Hofer Biography
Share 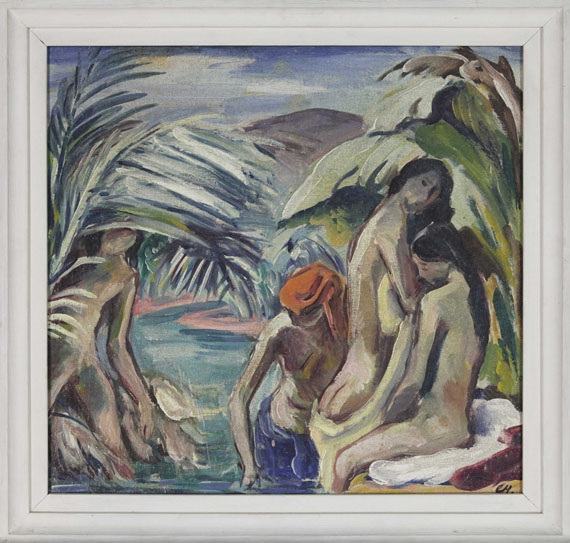