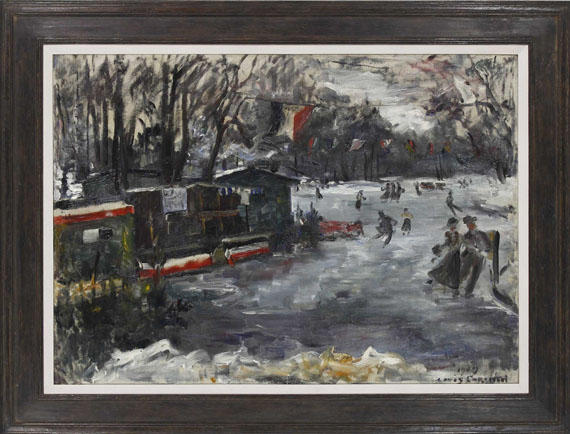 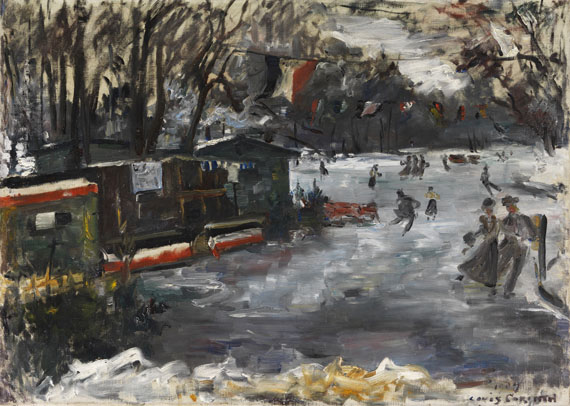 • Joyful Berlin park scene.
• With hints at the artist's expressionist late period of creation.
• Coloring characterized by an expressive radiance consistent with the season.
• Shown at the grand Corinth Retrospective Exhibition in 1996/97.

"The flags! That’s a special field! Whenever there were flags, he was quick to paint them. Even back in Horst when we met, it seemed unusual and a little quaint when he began to fancy the flags flying here and there" Charlotte Berend-Corinth recalls (quote after: C. Berend-Corinth, Mein Leben mit Lovis Corinth, Munich 1960, p. 66f.). She probably came across the painting "Der Neue See im Berliner Tiergarten" (1908, Kunsthalle Mannheim) with the boat rental, the boat house and the flags that her husband painted in Berlin in the summer of 1908. Or she saw the "Eisbahn im Berliner Tiergarten", which Corinth painted in 1909 at her art trader Heinrich Thannhauser. Corinth didn’t have to walk far from his studio on Klopstockstraße to the popular tavern on the lake to perhaps enjoy a beer at the boat house, to jot down a few notes and make sketches of the events on the lake – rowing boats in summer and ice skaters in winter. The Große Tiergarten has a long history. Initially laid out as hunting grounds outside the city’s walls in the 16\up6 th century, Frederick the Great remodeled the premises in the early 1740s and turned it into a baroque pleasure garden for the public. In 1818 king Frederick William III of Prussia, in return, commissioned the young Peter Joseph Lenné, at that point still fellow of the gardening guild in Sanssouci, to create a landscape park in the style of English parks. The concept of the great Prussian garden artist, which was realized between 1833 and 1839, has basically been preserved up until today: The Tiergarten is Berlin’s green lung and the center of the city. Today Tiergarten still is the same popular recreational destination as it has always been. Corinth shows the pier with the wooden huts and the skirting along the banks of the Neuer See in the colors of the German empire from a slightly different perspective. The boats have been stored away, the frozen lake allows the skaters to enjoy their pastime. And just as it is the case with the painting "Der Neue See im Berliner Tiergarten" Corinth also devotes attention to the flags in this work, however, they are a little smaller and placed like a girland across the ice. Next to the four black, white and red flags of the German Empire, Switzerland, France and the United States are suggested, too. It obviously is a very cold day. Corinth sees the grayish sky in a slightly reddish tone, black-brown leafless trees stand against the sky, The ice is strong, a couple slides across the gray white surface, other skaters practice figures in the background. Winter landscapes with ice skaters by Pieter Breughel the Elder from the 16\up6 th century come to mind. Corinth knows these motifs well and enjoys the vivid and lighthearted goings-on, he tells the story of his encounters on the frozen lake in an expressive pictorial gesture with a swift brushstroke and the typical intensity of colors. [MvL]
More Information
+
Sell
Get a free appraisal for a similar object!
+
Register for
Lovis Corinth
+
Buying from A-Z
+
Contact a specialist
+
Lovis Corinth Biography
Share