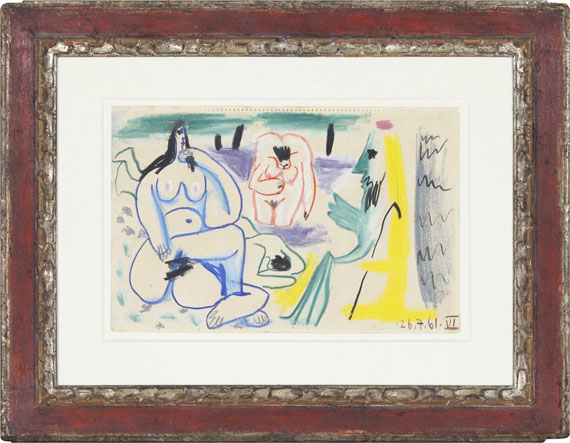 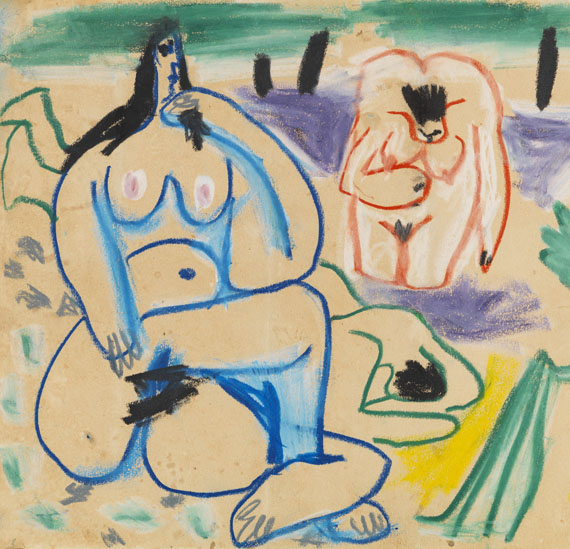 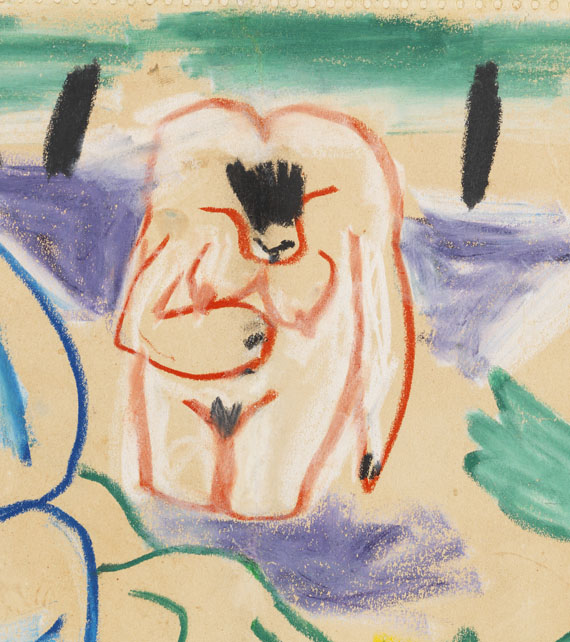 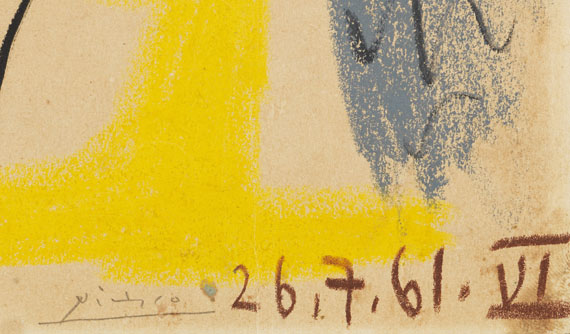 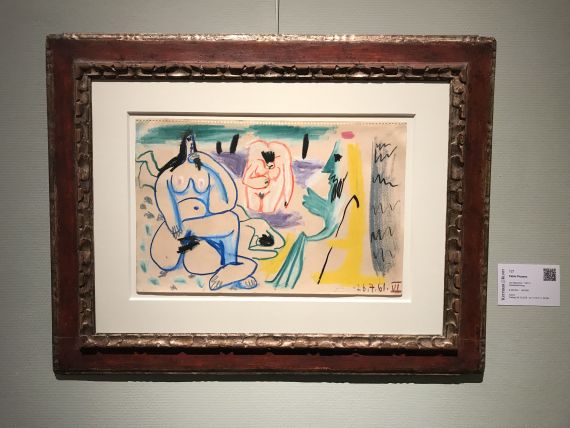 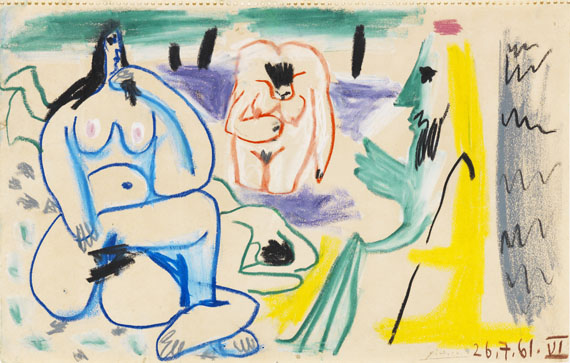 LITERATURE: Douglas Cooper, Pablo Picasso - Les déjeuners, Milan 1962, no. 129, with color illu. (here still without the signature, in Zervos from 1968 with later signature).
Galerie Wolfgang Ketterer, Munich, 15th auction, 19th and 20th Century, December 2, 1975, lot 1392, with color plate.
Cf. Douglas Cooper, Picasso, Le déjeuner sur l’herbe, 1960 - 1961, Paris 1962.
Cf. Barbara Zelinsky, Pablo Picassos Paraphrasen auf Edouard Manets "Frühstück im Grünen". Tableau eines künstlerischen Prozesses. Ilmtal-Weinstraße 2019.
"When I was a child my mother used to say: «If you become a soldier, you will be a general. If you become a monk, you will be pope.» I wanted to be a painter and I became Picasso."
Pablo Picasso, quote after H. Berggruen, Die Kunst und das Leben, Berlin 2008, p. 15.
"What was at stake was not only his own power as a painter but his power as a demiurge: the power to metamorphose certain objects in the world of reality which are also, and equally, paintings in a museum. Manet had freed him [Picasso] from the past and given him a new creative impulse. This was the last of Picasso’s sets of variations: it was also the richest and most fruitful"
M.-L. Bernadac, Picasso 1953-1972: Painting as Model, Late Picasso: Paintings, Sculpture, Drawings, Prints 1953-1972, ex. cat. London/Paris 1988, p. 72.

Picasso’s s gift as graphic artist and colorist leaves the observer bewildered over and over again. In terms of continuous creative progressiveness, the 20\up6 th century did not see any other artist that came even close to him. Up until an old age Picasso produced works that would inspire many art tendencies and movements that followed. Picasso was an obsessed artist on an incessant quest for artistic expression, not only in terms of style and motif, but also as far as the exploration of new techniques were concerned. Our colorful composition "Les Dejeuners" is particularly convincing for both its powerful coloring and its enormous graphic sharpness. Both elements are of fundamental relevance for Picasso’s artistic creation and find expression in this work offered here in an especially virtuoso symbiosis. The artist created our luminous sheet in context of an examination of Edouard Manet’s "Le Déjeuner sur l`herbe" on July 16, 1961. Manet’s painting from 1863, today in possession of the Musée d`Orsay, is considered an icon of art history: Owing to the rather provocative depiction of two naked ladies joining two gentlemen in an outdoor scene, the jury of the 'Salon de Paris' did not permit its exhibition, which is why it was only shown at the legendary 'Salon des Refusés' (exhibition of rejects). This exhibition of rejected artistic positions is today widely conceived as the hour of birth of Modern Art. In "Dejeuners" Picasso, the Master of Modernism, examines the early days of Modernism. Picasso rendered the soft yet cubistically simplified silhouettes of the seated female nudes in bright blue, correlating them with the nude in red contours in background. These two monumentally depicted figures dominate the composition and explicitly display their erotic appeal. Even though Picasso was blessed with a graphic comprehension that yielded famous illustrations of goats and cats, our work truly reveals the fruits of a long and unsparing graphic occupation with the female body.
Picasso’s occupation with Manet’s "Dejéuner sur l`herbe" reached its peak in the summer of 1961 when he made several drawings and paintings on this theme. Our sheet is part of a series of together eight color chalk drawings that Picasso made on July 26, 1961. This series is a remarkable document of both his artistic method of creation and the extremely poised variation and development of this subject. This is sheet six from the series and is, along with the last sheet (Zervos XX 109), characterized by the most elaborate composition. Just one day later, on July 27, 1961 Picasso used this motif in a painting that shows strong resemblance to our color chalk drawing. Today it is on exhibition at the Musée Picasso in Paris. Over a period of just two years Picasso made more than 20 "Dejeuner sur l`herbe" paintings, which are almost exclusively in possession of renowned museums and recognized private collections. The current whereabouts of most of the rare color chalks from the “Déjeuner” cycle are unfortunately unknown. The series from July 27, 1961 comprises only 8 sheets, among them our work. Additionally, according to Zervos, only ten further color sheets of this motif were made in 1961/62, which makes them even rarer than paintings from the "Dejéuner" cycle. Even though Picasso was almost non-stop productive, color compositions with this quality are extremely hard to find on the international auction market, which explains why the slightly smaller chalk drawing "Deux Nus" (Zervos XXX 341) from 1962 was sold in New York for a seven figure top price in 2018. Since the 1990s only four works from the series from July 27 had been successfully sold in London and New York, the last one in February 2016, which was the immediately preceding fifth sheet. This sixth sheet is one of the most mature and most colorful creations. After it has been part of an acclaimed Lower Saxon private collection since the mid 1970s, it is now showcased again. [JS]
More Information
+
Sell
Get a free appraisal for a similar object!
+
Register for
Pablo Picasso
+
Buying from A-Z
+
Contact a specialist
+
Pablo Picasso Biography
Share