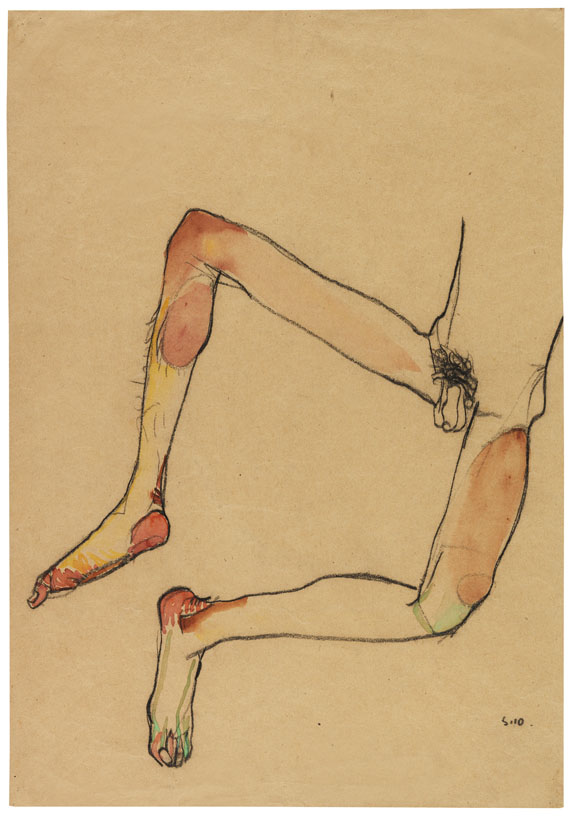 Essay
A capturing watercolor that shows Egon Schiele's body from the waist down, neatly contoured with subtle but defined lines and rendered in soft, mostly blood-red watercolors on heels, sole, knees and thighs. A provocative gesture with which the artist explores the lower part of his body, with his legs akimbo he puts clear focus on his genitals. Schiele conceals the sensitivities of the upper part of his body, his arms, neck and head, as it is the case in his famous painting "Sitzender Männerakt" (Seated Male Nude), also from 1910 and part of the collection Leopold Museum in Vienna, however, this nude shockingly lacks the feet. Egon Schiele’s artistic development attained a very own style in 1910, an expressive exaggeration, he found a perspective of body and posture that would henceforth become characteristic, an overexpansion of the pose. With this provocative and at times shocking approach to physicalness, Schiele succeeded in capturing the depicted person’s physical and mental state, which he then rendered in drawings and watercolors in increased color contrasts, eventually taking the body’s phenomenology to an enormous and ecstatic burlesque. Sexual liberation, which was not only fueled by Sigmund Freud’s psychoanalysis, spread like wildfire in the world of the literati, musicians and visual artists. Gustav Klimt was able to win high society ladies as models and captured their, admittedly slightly concealed, passionate arousal in drawings. To both the young Oskar Kokoschka and even more so for Schiele, the passion for erotic fancies opened up a vast field of direct and sexually explicit observations. Schiele was able to sublimate the view on his sexual desire and to create subtle graphic aesthetics without ever walking into the pornographic trap. The artist convinced most of his female models, either close friends or even his lovers, to at times very intimate poses. For ecstatic male figure compositions the artist put focus on his own body and thus created likewise extraordinary and provocative expressions, just as it is the case with the watercolor of a male abdomen offered here. Schiele’s unsparing view of his haggard limbs is evident whereas the beauty of the depiction lies in its details, where it does not seek to provoke but to explore possibilities to be human and to obtain information not only about the own body. Schiele’s self portrait must surely be seen in connection with the roles he plays on the stage of his own work. However, one thing is sure, he held the free, unrestrained and nuanced drawing of extreme physical expression in high esteem, and was even willing to bear investigative custody for charges of immorality in April 1912. [MvL]
More Information
+
Sell
Would you like to sell a similar object?
+
Register for
Egon Schiele
+
Buying from A-Z
+
Contact a specialist
+
Egon Schiele Biography
Share 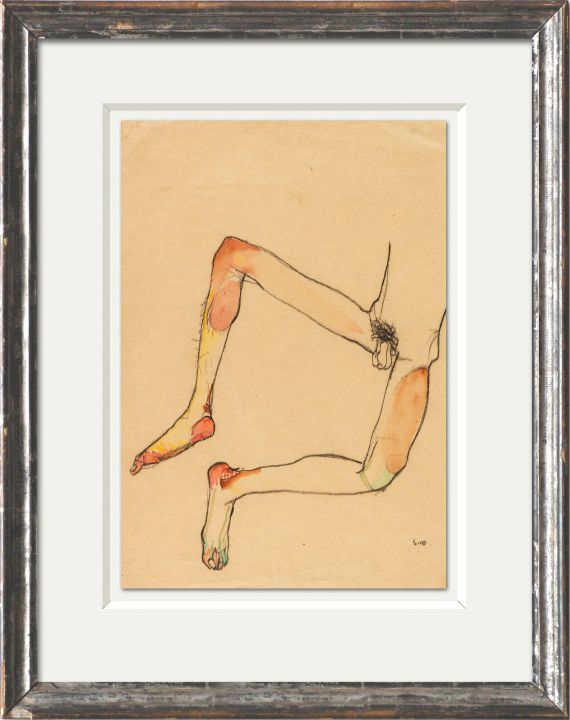