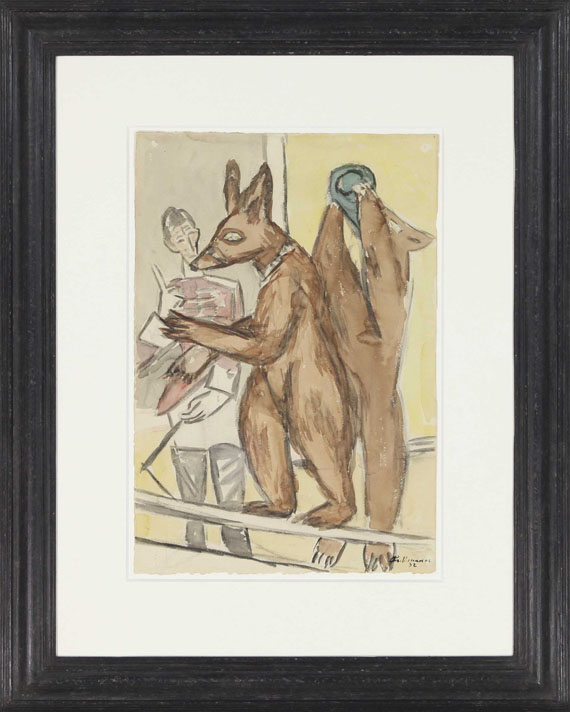 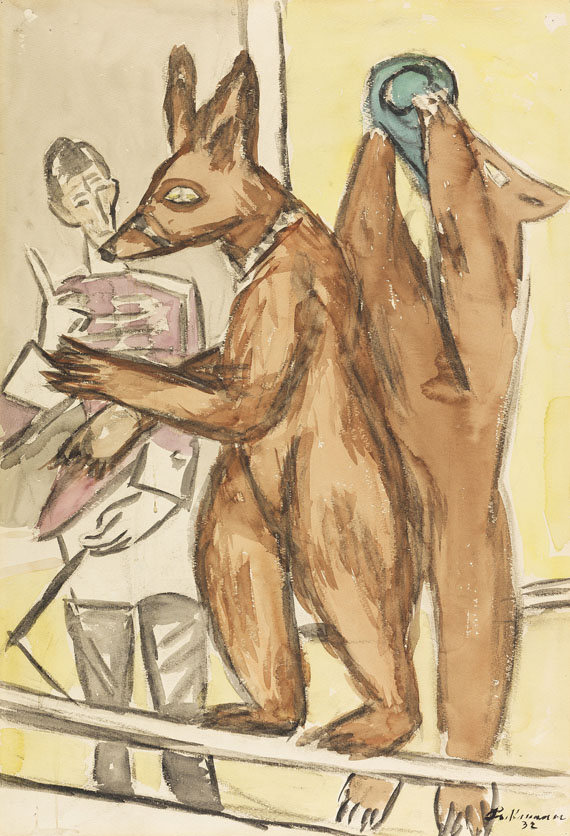 Theater, circus, variety shows, carnival, actors, dancers, musicians, artists, clowns, lions, bears: The stage and its protagonists are a key theme in Max Beckmann‘s image world. "Max loved visiting the circus or variety shows", recalls Mathilde Quappi Beckmann, "we went to so many shows, in Frankfurt just as much as in all the other places we used to live. He loved the circus people in their gaudy costumes. Due to their dexterity in even the most difficult performances, Beckmann saw the acrobats as some kind of higher beings." (Quote after: Mathilde Q. Beckmann, Mein Leben mit Max Beckmann, Munich/Zürich 1985, p. 17) Accordingly, Beckmann saw a lot of metaphors for human action “hidden“ in the world of the stage, for instance the unfreedom of existence, the permanent balance between the impact of the forces, a safety net of dreams and feelings, a short-lived cabinet of wonders that helps to forget reality and to immerse into the fascinating work of the animal tamer dressed in a neat circus uniform. The head up high, a straight look, the index finger stretched out and the whip casually hanging from the waist in case of an emergency, that is enough to have control over the unnatural proceedings, to let the mighty animal balance on a rope in upright, almost begging and cute posture. The bear appears to be highly concentrated, the eyes wide open, trying to find balance with his forelegs and his paws, avoiding any mistake, well aware that he will be rewarded for his acrobatic act just like his fellow behind him who already rewards himself with a big mouthful from a turquoise vessel. Beckmann is also highly concentrated, he seems to share the excitement and is very close to the events; the arena is suggested by just a few lines. His wife Quappi shared the excitement for this watercolor that was made in Frankfurt in 1932 far beyond Beckmann‘s death in 1950, as it was not before 1964 that she entrusted Catherine Viviano, who had organized several comprehensive Beckmannn exhibitions at her New York gallery (1950-1970), with the sheet. There is proof of the "Dressierten Bären" at the gallery of Grace Borgenicht at a slightly later point. She was a distinguished Beckmann expert and in charge of the estate of Mathilde Quappi Beckmann after her death in 1980 as well as of the remains of her husband's estate. She presented the works in her gallery until the early 1990s. In 1989 the archaeologist, Egyptologist and collector William Kelly Simpson (1928-2017) eventually bought the watercolor from her. He was married to the granddaughter of the philanthropist John Davison Rockefeller jr. and had a teaching post at Yale University. The fascinating story of the intimate watercolor from 1932 ends in his estate. Beckmann remained true to the circus in the USA, visiting shows in St. Louis and New York. "Between eight thirty and eleven thirty at Barnum & Bayle [Bailey], the finest and greatest circus I have ever seen!", Max Beckmann notes in New York on April 19,1950 (quote after: Max Beckmann, Tagebücher 1940-1950, compiled by Mathilde Quappi Beckmann, published by Erhard Göpel, Munich 1955, p. 371). [MvL]
More Information
+
Sell
Get a free appraisal for a similar object!
+
Register for
Max Beckmann
+
Buying from A-Z
+
Contact a specialist
+
Max Beckmann Biography
Share